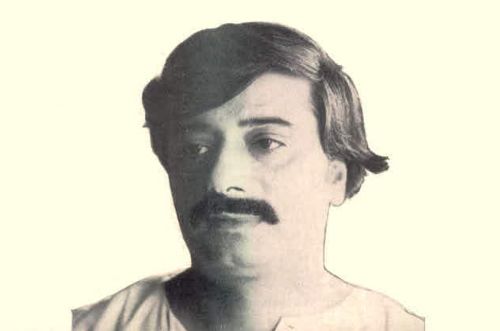 Awtar Krishna Kaul is one of those artists who achieved recognition only after their death. He was born on 27th September 1939 in Kashmir. After graduating from Punjab University, Chandigarh in the early 60s, he left for the US and enrolled at the Institute of Film and Television Technology at the City University of New York. American cinema was undergoing a chaotic transformation in the 60s. The young Kaul was deeply influenced by the work of experimental filmmakers like Stan Brakhage, Maya Daren, Andy Warhol, Kenneth Anger, and Jonas Mekas. However, it was the sensibilities of French filmmaker Robert Bresson and Danish filmmaker Carl Dreyer that attracted Kaul the most. The sombre poesy and naturalism of Bresson and Dreyer would be clearly visible in his films. This influence was seen in his first feature. As part of his curriculum, Kaul made three short films. He bagged his first award - the Best Auteur of Documentary Films, for his documentary, The Golden Year. The film is sadly lost or beyond recovery.

When in America, to support himself, he took up the job of copyholder with Associate Press. One day, Kaul was caught by the editor reading Arthur Koestler’s ‘Darkness at Noon’ while at work. He presumed he would be fired instantly. However, after assuring himself that Kaul appeared well-read, the editor made him a news brief writer.

While in the US, he also married an American person, Anne.

After completing his graduation in film direction, Kaul returned to Bombay. He soon began preparing to make his first feature film. He got the opportunity to work as an assistant director to filmmaker James Ivory in the 1970 Indo-US co-production, Bombay Talkie, which was part of Shashi Kapoor’s oeuvre of collaborations with the acclaimed filmmakers.

For young Indian filmmakers who wished to break away from the escapist commercial cinema, the early 70s were key years, with a revolution around the corner. The Film Finance Corporation, a government financing body, had started extending small loans (Rs.3 to 5 lakh) to technically qualified persons who produced a good script. Students of the Film and Television Institute, Pune made the ultimate use of this. Kaul submitted his script for the film 27 Down (The Benares Express) based on Ramesh Bakshi’s Hindi novel, Athara Sooraj Ke Paudhe. It is said that he picked the book by walking into a bookstore and asking the seller to give him books no one wants to read. After a period of struggle, Kaul managed to get a nod from the National Film Development Corporation (NFDC) to co-produce his debut film.

The loan sanctioned, he threw himself into his work, as if he knew that this was to be his only film. He decided that the film would be shot in black and white. His film included a number of names who would go on to be established artistes like M.K. Raina, an NSD graduate with long years of theatre experience; Rakhee Gulzar, already a known star and acclaimed actor; Sadhu Mehar, who was as yet unknown to Hindi audiences, having worked only in Oriya cinema till then; Om Shivpuri, a prodigy from NSD; Rekha Sabnis, who was well known to parallel cinema practitioners, and Sudhir Dalvi, a promising up-and-comer in the film industry. The classical maestro Hariprasad Chaurasia and Bubaneshwar Misra (known as Bhupan Hari) were chosen to compose the film’s music. Apurba Kishore Bir, who would go on to become an acclaimed filmmaker himself, was the cinematographer. Rakhee Gulzar had loved the film’s script and agreed to the project on the recommendation of Film Finance Council’s B K Karanjia.

With buzzing Bombay as his canvas, Kaul also finalized Varanasi as another key location. Shoots were done mainly at night, on isolated platforms (including the famous Victoria Terminus) with extras used to create crowds at train arrivals and departures. Most of the film was shot using a handheld camera with the radical film The Battle of Algiers as their chief inspiration. Often the camera was kept hidden till shooting started so as to attract minimum attention. Kaul would climb atop a pillar and support his cameraman Bir and the camera on his shoulder, for challenging top-angle shots. Kaul and his cameraman even escaped death on the tracks on some occasions. The aesthetic style was part lyrical and part cinema verité. His brother Pradhuman Kaul also quit his job in the Indian Air Force to help in the film’s production.

Unfortunately, the film was beset by delays. The Varanasi sequences proved to be difficult, with equipment not reaching them in time. As expenses increased, Kaul would even fashion trollies out of handcarts.

Once the film was completed in 1973, Kaul set about trying to find buyers for his film. This was a real challenge as distributors balked at the prospect of a black and white film. Low budget films find it difficult to find even limited shows as they are dubbed experimental and obscurantist.

On 20th July 1974, at the usual Bombay coffee-shop rendezvous of young filmmakers, Awtar Kaul was wondering how to raise his passage money to Locarno, where his first feature film 27 Down was entered as India’s official entry.

The same night, he was dead, drowned while trying to rescue a friend - a young woman journalist. According to reports, the 35-year-old Kaul was swallowed by the Arabian Sea in an attempt to save his friend, who was found dead later on the same shore and was discovered by fishermen. A few hours after the hospital authorities pronounced him dead, came the announcement of the two awards his debut film had bagged: Best Hindi Film and Best B&W Photography at the National Film Awards. Kaul had died probably without even hearing the news bulletin.

At his death, his wife, family, and cameraman were left with the responsibility of his debts and the distribution of the film.

Mercifully, 27 Down had a successful run in Bombay four years after it was completed. In a brief New York Times review, 27 Down was mentioned for its fresh approach. "This film is noteworthy for accurate and humorous images that accurately depict everyday life in India."

However, it remains one of those forgotten gems of Indian cinema which deserved more audience than it actually got. 27 Down was Awtar Krishna Kaul’s only feature film, but he had already made an unforgettable mark on Indian cinema history.