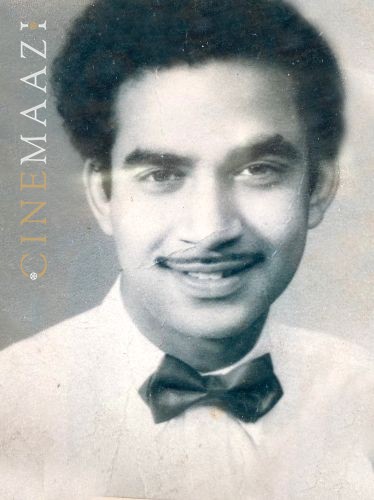 Basant Lal Pahwa was born one of six sons to Sundar Das Pahwa and his wife Veera Devi on November 13, 1929. When their father passed away, he left an inheritance of around seven to eight lakhs to the brothers, an astronomical sum in the 1950s. Though he was married at the time, he followed his older brother Bikram to Bombay with the hopes of becoming a Hindi film hero.

Once in Bombay, Basant Pahwa had three children. While planning their first film, the brothers signed popular screenwriter and lyricist Vrajendra Gaur to direct it. However, he was directing a film titled Kasturi at the time. Having signed a contract with the makers of Kasturi, Vrajendra Gaur could not accept another film until Kasturi was released.. This proved to be fortunate for their neighbour, the young Shakti Samanta. Previously an assistant to the veteran director Phani Majumdar, Shakti Samanta was working on Baadbaan (1954) at the time and looking for his break as an independent director. He was signed on by Bikram Pahwa under the new banner, P.R. Films, for three films, and the first was to be Bahu (1955). However, distributors of the film objected to this choice—they did not want to sink their money into a movie both helmed by a first-time director and a debuting actor as the hero. To circumvent this problem, Karan Dewan was enlisted to play the lead in the film, and Basant Pahwa was introduced on screen in a smaller role under the screen name of Basant Kumar. He was promised that the next film under the banner would feature him as the hero.

Apart from Karan Dewan, the cast of Bahu included stalwarts like Johnny Walker, Shashikala, Usha Kiron, Ameer Bano and Mahmood. The dialogues for the film were written by Vrajendra Gaur, and Hemant Kumar set the lyrics of S.H. Bihari to tune for the film. Popular singers like Lata Mangeshkar, Geeta Dutt and Talat Mahmood were roped in to voice the songs. Out of nine songs, two were picturised on the debutant Basant Kumar and his fellow actress Manju. Unusually for an actor making his debut at the time, Basant Pahwa played a grey character in the film.

Bahu was released at Liberty cinema, one of the most prestigious theatres in Bombay, through Shri Abdullah Seth —known to his friends as ‘Mota Seth’—of Favourite Films. The choice to release the film at Liberty was an ambitious one, considering that it was a black-and-white film with a new director at a time when the colour film had started making inroads into Indian cinema. Across the road at Metro cinema, the film Jhanak Jhanak Payal Baaje (1955) had released simultaneously, a colour film that became a huge hit. Despite this, Bahu ran for four weeks at Liberty before it was shifted to Krishna cinema. A Filmfare review of the film in December 1955 lauded Bipin Gupta’s performance in the film for its gripping quality. As the review said, the film’s narrative was a “copy-book tale replete with the stuff of dreams and underscoring its appeal is the emphasis that virtue is its own reward.”

Presciently, Shakti Samanta had brought in Hemant Kumar for Bahu’s music, keeping in mind that music was one of the strongest selling points of a film. His foresight proved correct, and the film’s music was a hit. Interestingly, Ravi, who later went on to be an independent music director, worked as Hemant Kumar’s assistant for Bahu. The song Dur dur se kya jaata tum paas jo humara aayega, picturized on Tun Tun and Johnny Walker onscreen, required some yodelling, and Ravi stepped in to sing playback himself with his wife Bela Mukherjee. This was the first instance in Hindi cinema that a music director's wife and his assistant were asked to sing a duet together. The song was immensely popular with audiences of the time.

The next film Basant Pahwa worked on, unfortunately also his last, was Bombay Race Course (1965). He co-produced the film with his brother Bikram, who was the main producer of the film. The film was initially titled Race Course following its subject matter which was later switched to Bombay Race Course and the hero was to be a jockey. The brothers approached Dev Anand to play the male lead in the film. The star is said to have liked the character. He agreed to participate in the film, but when he asked for his fee, the brothers realized that they could not accommodate it within their budget for the movie. Dejected, they were on their way back when they passed the actor Ajit’s house and were struck by an idea. They signed him on as a hero, and the film was made with Ajit, K.N. Singh, Murad, Nalini Jaywant, Johnny Walker and Minu Mumtaz. K.N. Singh was to play the villain, while Nalini Jaywant played the romantic lead opposite Ajit.

Unfortunately, the film took nearly 9 years to release from the time it hit the floors due to some financial problems. In the interim, Basant Pahwa moved to Delhi with his family in the early 1960s. The delayed release of the film caused an unforeseen problem: by the time the film came to the screen, the hero Ajit had become widely recognized for playing a villain, and had signed for other films like Suraj (1966) and Prince (1969). As a result, Bombay Race Course was a box office disaster upon its release, though the music composed by Madan Mohan was a hit.

Basant Lal Pahwa passed away in Delhi on 18 February, 1989. He is survived by his wife Usha Pahwa and children, Sundeep, Mala and Rajit.