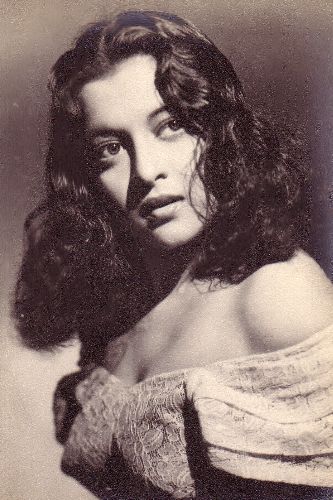 Hailing from a middle-class traditional Marathi family, Nalini Jaywant was among the pioneer actresses who broke the taboo around working in films, and went on to carve a name for herself on the strength of her beauty and acting abilities. In a career spanning approximately 25 years, she earned name and fame playing the main lead in a total of 60 films between 1941 and 1965. Some of her notable films include Rahi (1953), Shikast (1953), Nastik (1954), Railway Platform (1955), Munimji (1955), Hum Sab Chor Hain (1956), and Kala Pani (1958). Entering the film world with Radhika (1941), her last film in the main lead was Bombay Racecourse (1965). She also sang a total of 39 songs in 9 films. Her pairing with Ashok Kumar as well as Ajit was widely appreciated; she starred opposite Ashok Kumar in Sangram (1950), Samadhi (1950), Jalpari (1952), Kafila (1952), Nau Bahar (1952), Saloni (1952), Lakeeren (1954), Naaz (1954), Mr. X (1957), Sheroo (1957) and Toofan Mein Pyar Kahan (1963). After a gap of 18 years, she was seen in Nastik (1983) playing the hero Amitabh Bachchan’s mother. Unable to cope with the new avatar of a character artist and a changed scenario, she subsequently bid goodbye to films forever. She won the Filmfare Best Supporting Actress Award for her performance in Kala Pani (1958). She was also honoured with the Dada Saheb Phalke Academy Lifetime Achievement Award.

Born on 18 February, 1926, Nalini Jaywant was brought up in Bombay’s Girgaum area, the daughter of a Customs officer. The only sister among two brothers, she was inclined towards dance since childhood and took lessons in Kathak from Mohan Kalyanpur. Simultaneously she learned vocal music from Heerabai Zaveri. With cinema halls such as Swastik, Dreamland and Imperial very near to her house, there was also an inclination towards films but taking into consideration the mindset of society then she couldn’t think of working in films. That changed to some extent when her paternal aunt’s daughter, Shobhna Samarth became an established name in Hindi cinema.

Despite objections from her father, she was signed on by producer Chiman Bhai Desai when she was barely 14, for the film Radhika. Directed by Chiman Bhai Desai’s son Virendra Desai, she was paired opposite Harish. Nalini sang three solos and four duets with Harish, Noorjehan and Maruti Rao in the film. Three of her initial five films, namely Radhika, Bahen (1941), and Nirdosh (1941) were made under the banner of National Studios, while Aankh Michauli (1942) and Adaab Arz (1943) were produced by Amar Pictures.

In the year 1945 Nalini got married to Virendra Desai, many years her senior, who was already married with children from his first marriage. Apparently, because of the second marriage, Virendra Desai had been disowned by his family from home and business. Under such circumstances, Nalini Jaywant’s ties with National Studio and Amar Pictures had also been snapped. Virendra Desai and Nalini went on to sign a contract with Filmistan film company, shifting to a rented bungalow in Malad, close to the studio. Nalini’s husband Virendra Desai had put forward the condition that she would only act in films that he directed. Despite being paid a monthly salary, Nalini remained without work for two years, practically forgotten by audiences. The couple separated in 1948. Nalini had only one release in this period--Venus Pictures’ long-in-the-making Phir Bhi Apna Hai (1946). Her career gained momentum after her contract with Filmistan ended and simultaneously she divorced Virendra Desai. Nalini went on to work in several films like Anokha Pyar (1948) with Dilip Kumar, Gunjan (1948) with Trilok Kapoor, Chakori (1949) with Bharat Bhooshan, Ankhein (1950) with Shekhar and Bharat Bhooshan, Hindustan Hamara (1950) with Dev Anand, Muqaddar (1950) with Kishore Kumar and Sajjan.

Jaywant acted in only five films in the 60s, namely Amar Rahe Ye Pyar (1961), Senapati (1961), Girls Hostel (1962), Zindagi Aur Hum (1962), and Bombay Racecourse (1965). Amar Rahe Ye Pyar was directed by Prabhu Dayal, who had earlier acted with Nalini in Munimji. During the making of the film, they wed. Post Bombay Racecourse, Nalini Jaywant bid goodbye to the film world to devote herself to home and hearth. After a gap of 18 years, she was once again seen onscreen in Nastik in the role of hero Amitabh Bachchan’s mother. It left her disillusioned as the role apparently turned out to be a far cry from what was narrated to her, and she decided not to look back to the film world again.

Playing the main lead in a total of 60 films during her career span of 25 years between 1941 to 1965, her pairing with Ashok Kumar and Ajit was widely appreciated—she acted in 10 films with Ashok Kumar and the same number of films with Ajit. Her films Nirdosh (1941) and Nand Kishor (1951) were bilinguals which were made in Marathi as well; she also acted in a Gujrati film Warasdaar (1948).

She led a largely reclusive life since 1983. After the death of her husband Prabhu Dayal in 2001, she lived alone in her spacious bungalow at Union Park, Chembur. Nalini Jaywant passed away on 24 December 2010, aged 84.