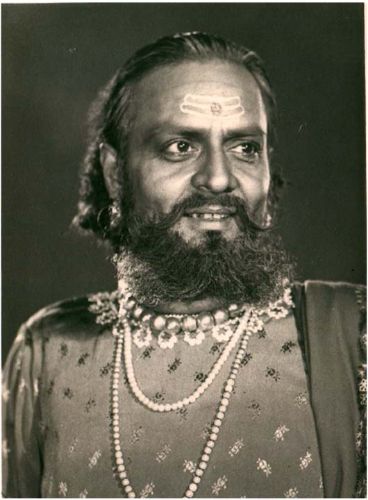 One of the major stars of early Telugu cinema, Chilakalapudi Seeta Rama Anjaneyulu, better known as CSR Anjaneyulu, became famous for his portrayals of mythological characters like Ram and Krishna. His stardom and characterisations would precede figures like N T Rama Rao and Akkineni Nagheswara Rao.

He was born on 11 July, 1907 in Chilakalapudi in Andhra Pradhesh, to Lakshmi Narasimha Murthy who worked in the Revenue department. Later they shifted to Ponnur in the Guntur district. After finishing his studies, he worked as a co-operative supervisor for some time. But his heart was in theatre. He soon became a renowned actor-singer, featuring primarily in stage mythologicals.

He entered cinema with Sarvottam Badami’s Rama Paduka Pattabhishekam (1932), based on a story from the Ramayana. Ramadasu (1933) proved to be a landmark role for him. Other popular roles were Krishna in Draupadi Vastrapaharanam (1936), Tukaram in Tukaram (1937), Venkateshwara in Shri Venkateshwara Mahatyam (1939), a villainous role in Rojulu Marayi (1955) and Shakuni in Maya Bazar (1957). He later shifted to acting in socials with Raja Sandow’s Choodamani (1941). He also displayed a comic flair in his roles in Grihapravesham (1946) and Appu Chesi Kappu Podu (1959). He also contributed to the cause of the freedom struggle, by donating Rs 10000 to the Indian National Army of Netaji Subhash Chandra Bose.

One of his two brothers, C S Nageshwara Rao was the assistant director for films like Gunasundari Katha (1949), Suvarna Sundari (1957), and Maya Bazar (1957). His other brother C Venkata Rathnam became a production manager, mainly working on films featuring Bhanumathi Ramakrishna. CSR Anjaneyulu passed away in 1963.