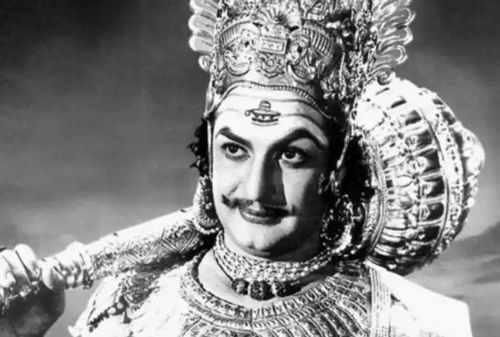 Few actors have commanded the kind of mass following and even fewer have successfully politically mobilised said following as N T Rama Rao did. Nandamuri Taraka Rama Rao, popularly known as NTR, was the undisputed megastar of Telugu cinema and went on to serve as Chief Minister of Andhra Pradesh for three terms. Starring in primarily mythological films, NTR was known for portraying a variety of characters like Rama, Krishna and even Duryodhana and Ravana. He also portrayed several Robin Hood-esque characters in socials, building up a credible man-of-the-people persona. These populist portrayals led him to be called Messiah of the Masses.

Born on 28 May, 1923 in Nimmakuru, his parents Nandamuri Lakshmayya Chowdary and Nandamuri Venkata Ramana were farmers. He was adopted by his uncle and aunt as they were childless. After attending school in his village and later in Vijayawada, he studied first at SRR & CVR College and later in Andhra-Christian College, Guntur. During his student days he was engaged in theatre, sometimes performing female roles as well. He collaborated with K Jaggaiah while at Andhra-Christian College. He also established the National Art Theatre group in 1946. After his studies, he briefly worked as a sub-registrar in Prathipadu but his heart was always in acting. He soon quit the job to pursue acting full time.

His first role was a small one - in L V Prasad's political melodrama Mana Desam (1949). His first lead role came in Palletoori Pilla (1950) alongside another future megastar Akkineni Nageshwara Rao. Interestingly, the film would be remade as Insaniyat (1955) in Hindi as the only film to star Dilip Kumar and Dev Anand together. While this film was a success, his breakthrough came in the same year in another melodrama - Shavukaru (1950). It was the debut film for Vijaya Studios and began a new era for Telugu melodramas which adopted a more realist tone. NTR would star in several Vijaya hits following this, including Pathala Bhairavi (1951) and Pelli Chesi Chudu (1952).

A significant step in his career would come in 1957 when he starred in Maya Bazaar, which was the first time he donned the mantle of Krishna. Maya Bazaar would also have dialogues written in the contemporary diction, making it more accessible for people. This would become the defining genre of NTR’s career. Another big hit around this time was Shri Venkateshwara Mahatyam (1960). His success in mythologicals (he would play Krishna 17 times) was unmatched - playing a range of characters like Ram (Lava Kusha, 1963), Ravana (Bhookailas, 1958), Tirupati Venkateshwara (Shri Venkateshwara Mahatyam), Lord Shiva (Dakshayagnam, 1962) and many more. It has been said that he was initially nervous about playing Krishna in Maya Bazaar. But his first appearance on the sets in the garb of Krishna drew such applause from the crew (on director KV Reddy's orders) that he became convinced. It is said that after he portrayed Krishna in Shri Krishna Pandaveeyam (1966) his image was worshipped in many households of Andhra Pradesh. His role as Tirupati Venkateshwara also became hugely popular, leading many people to identify him with the divine figure.

His Thodu Dongalu (1954), produced under the National Art Theatre banner by his brother Nandamuri Trivikrama Rao, won the Certificate of Merit for Best Feature Film in Telugu, as did Seetharama Kalyanam (1960). Turning director, he won the National Award for Best Feature Film in Telugu for Varakatnam (1968). He was also the recipient of two Rashtrapati Awards for Raju Peda (1954) and Lava Kusa. He won his only Nandi Award for the blockbuster Kodalu Diddina Kapuram (1970).

Towards the latter part of his career, as interest in mythologicals waned, he started acting in socials, usually playing a rebel character standing up for the oppressed. Some significant films from this period were Devudu Chesina Manushulu (1973), Driver Ramudu (1979), Vetagadu (1979), Sardar Papa Rayudu (1980), Justice Chowdhary (1982), and Bobbili Puli (1982). His films from this period also showed influences of the angry young man films. Another significant film was the socio-fantasy Yamagola (1977) in which NTR is shown organising the workers of hell. His directorials often featured him playing multiple roles, even portraying five roles in Srimad Virata Parvam (1979).

In 1982 he founded the Telugu Desam Party, as an opposition to the ruling Indian National Congress. NTR's political career has been the subject of much discussion, both for his meteoric rise as well as the mobilisation of his filmic persona for garnering mass support. According to historian Uma Maheswari Bhrugubanda, his films relied on the ambiguity of the divine and real figures he portrayed, simultaneously deifying him as well as turning him into a voice for the people - a secular citizen figure. As he launched his political party, his rise was also portrayed as the ascent of the Kamma caste against the mostly Brahmin and Reddi dominated Congress Party. His political challenge also relied on an appeal to a Telugu identity, which tried to unite several aspirational movements into one. His political campaigns became famous for the Chaitanya Ratham - campaigning on a green Chevrolet van for nearly eight months all over the state. It is said that the idea was borrowed from another actor-politician great, MGR. The campaign was an undisputed success, as TDP won absolute majority in the 1983 elections, with NTR sworn in as Chief Minister. He was removed from the post by the Governor in 1984, as he had to undergo open heart surgery. He returned to power soon after, despite opposition from the Governor. He even holed up all his MLAs in a hotel in Mysore during this period, for fear of horse-trading. He also campaigned for his friend MGR in the Tamil Nadu elections of 1984, even though MGR at that time was allied with the Congress. During his career, he emerged as a key figure in the national opposition to the Congress, playing a role in the formation of the National Front which came to power in 1989. His political career was cut short in 1994 when his son-in-law Chandrababu Naidu rebelled against him and replaced him as Chief Minister.

NTR was married at the age of 20 to Basava Rama Tarakam, with whom he had eight sons and four daughters. Ramakrishna Studios was founded in the memory of his eldest son Nandamuri Ramakrishna Sr who passed away in 1962. Nandamuri Saikrishna and Nandamuri Harikrishna, his third and fourth sons, followed him in politics. His sixth son Nandamuri Balakrishna became an actor in the 80s. His second daughter Daggubati Purandeswari became a politician for the Indian National Congress and later for the Bharatiya Janata Party. Two of his grandsons, Nandamuri Kalyan Ram and Jr. NTR followed his footsteps in becoming actors.

After Basava Tarakam passed away in 1985, NTR established a cancer hospital in her name. He later married Lakshmi Parvathi who wrote his two-part biography - Eduruleni Manishi and Telugu Tejam.

The legendary actor passed away on 18 January, 1996 following a heart attack. In his honour the NTR National Award was instituted by the Andhra Pradesh government. The NTR National Literary Award was instituted by the NTR Vignan Trust. He had also founded a university in his own name in 1986. Two biopics, N.T.R: Kathanayakudu (2019) and N.T.R: Mahanayakudu (2019) were made with his son Nandamuri Balakrishna playing him. He was the recipient of the Padma Shri from the Indian Government in 1968.