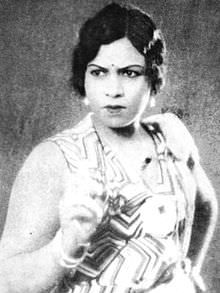 In the span of only four years, while working as an actress in Kohinoor and Imperial studios with prominent directors like Nanubhai Desai and Manilal Joshi, she established Fatma Film Company in 1926. She directed, produced, wrote and even acted in some of her own company’s films. Bulbul-e-Paristan (1926), her first venture as a director, is considered to be the first Indian film directed by a woman. A big-budget fantasy about a fairyland, featuring one of her daughters, Zubeida, the film included various sequences that featured daring special-effects. Apart from expanding her own filmography, she also launched the career of her three daughters, Sultana, Shahzadi and Zubeida by casting them in her movies. Zubeida went on to act in the first Indian talkie, Alam Ara (1931). Fatma Begum started Victoria Film Company in 1928 and directed some prominent films like Chandravali (1928) and Heer Ranjha (1928). In 1929, she made five feature films, Kanakatara, Milan Dinar, Naseeb Ni Devi, Shakuntala and Wonderful Prince. As the silent era made way for the talkies, she appeared in G.P. Pawar’s Duniya Kya Hai (1937) – her last film. She died in 1983 at the age of 91, with the world still largely unaware of her sterling contribution to Indian cinema.