Cinemaazi remembers B N Sircar on his death anniversary. 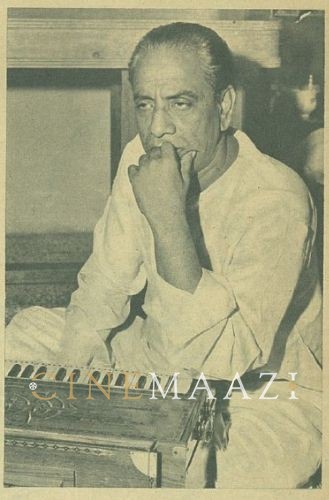 Ghulam Mohammed was a plain, unsophisticated man, sometimes even too naïve for a career in show business. He was born in 1903 in the village of Naal in Bikaner. His family practiced music as a vocation, and Ghulam received his training from his father, Nabi Bakhsh, a well-known tabla player and a professional stage actor. Nabi trained Ghulam in the genres of khayal and thumri and helped him learn the table as well. Influenced by Rajasthani folk music, Ghulam soon became an adept dholak player.
Ghulam, following in his father’s footsteps, was claimed by the stage at an early age. He was around seven years old when he made his stage debut in Moradabad, as an emergency substitute for another child actor in a play titled Jallad Ashiq staged by Albert Theatre. He proved to be a hit in the role and this led to his joining his father in the company as a regular employee paid a monthly salary of 25 rupees. At an age when most children face the blackboard, Ghulam Mohammed was thus facing the footlights.
The child actor and his father toured widely with the touring Albert Theatre. Three years later when the theatrical company came down to Bombay, the father and son acting team left Albert to a join a rival, the Jodhpur and Bikaner Natak Company. Shortly afterwards, Nabi Baksh died and Ghulam Mohammed, about 10 years old, was suddenly obliged to support not only himself but also his family.
Continuing his acting career, Ghulam Mohammed began to grow up in the world of theatre. Travelling from place to place with his company became a routine of his life. As he continued to act, he also refined his tabla skills—a handy cornerstone for his career as a composer. In Ujjain when the theatrical company suffered severe loss in a conflagration that damaged much property and led to the theatre employees losing their jobs, his skill with the tabla helped him a great deal. At the time, films were still silent, and Ghulam Mohammed approached the owner of a local cinema and secured a job as a tabla- player among the orchestra accompanying the screening of films. For his services, he was paid four annas a day, a high salary in those days.
About a month later, the Jodhpur and Bikaner Natak Company was back on its feet and on the move again. With the theatre, Ghulam Mohammed did an extensive tour of Saurashtra and Malwa areas. His visit to Junagadh was made memorable when the Minister of the area, pleased with his performance, awarded him a gold-encrusted sword. His turn as Rafiq Alam in the play Shan-e-Islam was so well-received that Rafiq Alam became his nickname.
When the Jodhpur theatrical company pitched its tent in Bombay in 1929, Ghulam Mohammed became the stage director in addition to being an actor. In 1932, a year agter Indian films had entered the talkie era and musicians were the new talent in demand, Ghulam Mohammed joined Saroj Movietone as a tabla- player, while continuing his association with the stage. The first motion picture which utilized his services as a table-player was Saroj Movietone’s Raja Bharthrihari (1932).
In the following years, Ghulam Mohammed worked as an instrumentalist with music directors like Rafiq Ghaznavi, Irshad Ali and Anil Biswas. In 1941 he joined Circo Productions. Soon after, he worked in Kardar’s Sharda (1942) whose exceedingly popular music was composed by Naushad. With Kardar’s Sanjog (1943), Ghulam Mohammed became an assistant to Naushad, an assistantship that continued for some eight years up to Aan (1952) and long after Ghulam Mohammed had become a full-fledged music director.
In 1942, Ghulam Mohammed got his first break as an independent composer. The assignment was Paras Prakashan’s Mera Khwab (1943), a stunt film. While a few sources claim that his debut as an independent composer was Baanke Sipahi (1937), a costume drama directed by R N Vaidya, but it is unclear whether the Ghulam Mohammed mentioned in the credits is the same man. Unfortunately, no songs from the latter film are available as of now.
His second composing assignment was Tiger Queen (1947), another stunt film. In Mera Geet (1946), his third assignment, he was one of a team of four composers. Between 1944-45 he signed a contract with P N Arora’s All India Pictures to compose music for the film Doli (1947). Ghulam Mohammed then went on to score music for nine more films for the same production house: Pugree (1948), Paras (1949), Pardes (1950) (whose popular songs included Mere Ghungarwale Baal and Kismat Bananewale Zara Samne Toh Aa), Nazneen (1951), Gauhar (1953), Rail Ka Dibba (1953), Laila Majnu (1953), Hoor-e-Arab (1955) and Sitara (1955).
A busy tunesmith since Doli, Ghulam Mohammed is credited for a long list of popular songs like Yeh Duniya Hai, Yahan Dil Ka Lagana Kisko Aata Hai (Shair, 1949), Zindagi Dene Wale Sun (Dil-e-Nadan, 1953), Laade Mujhe Aasmani Chooriyan (Rail Ka Dibba, 1953), Nuktachin Hai Ghame Dil and Yeh Na Thi Hamari Kismat (Mirza Ghalib,1954).
According to Ghulam Mohammed, the dholak was first popularly featured in film music in Naushad’s compositions for Rattan (1944) and he played a part in popularizing the instrument as an item of the orchestra. He also claims credit for persuading Naushad to introduce the ‘matka’ as a musical instrument in Sharda (1942) and for popularizing the ‘duff’ in Sanyasi (1945).
His last assignment, Pakeezah (1972) directed by Kamal Amrohi,  is still considered one of his best works. The film and its music reached great heights of success, spurred both by its artistic finesse and the lead actress, Meena Kumari’s death. Sadly, Ghulam Mohammed himself did not live to see its success. In the works for over a decade, the film was released four years after Ghulam passed away on 18 March 1968. He had finished composing six songs for the film, and the background score as well as the rest of the music required for the film were completed by Naushad. When the film was released, the film’s credits mentioned Naushad’s name under ‘Title and Background”, and Ghulam’s under “Music”. In a career spanning almost four decades, Ghulam worked as an independent composer for around 33 films.