Cinemaazi mourns the passing away of Chandrasekhar

Cinemaazi remembers A Vincent on his birth anniversary 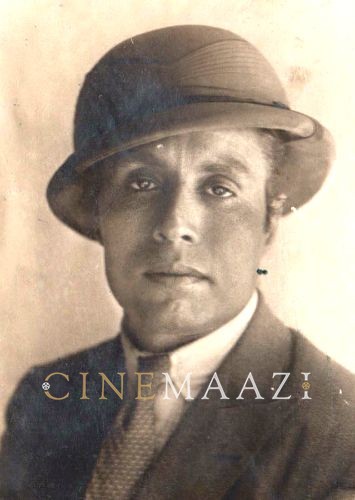 Ghulam Mohammad was a versatile actor, who played a variety of roles ranging from a youthful hero to villain and then elderly roles of father/uncle/brother. A sensitive actor, Ghulam specialized in portraying a disillusioned lover. He was known for his affective dialogue delivery and powerful acting ability to mesmerize the audience. A famous stage actor of more than 500 stage plays/dramas in the 1920s, he became a star villain in pre-partition films. After partition, he appeared in many Pakistani films. Ghulam Mohammad was versatile actor who performed excellently in more than 100 movies under fifty different directors during his long career spanning almost four decades. His twenty five films celebrated jubilees at different points of time and he was known as ‘Chacha’ in film circles.

Ghulam Mohammad was born in 1902 in Mochi Gate area, Lahore. His father Wali Mohammad Butt was a dealer in corn and shawls. His father died when he was only six years old and his schooling was restricted up to third primary level. As an adolescent, he was fascinated by Theatre/drama but his family circumstances forced him to join the army. During his military stint, he got a chance to enact a small role in the play Chrandrawall at the Y.M.C.A Club, Baghdad. His talent was recognized by the organizers and he acted in more plays organized by YMCA.

After three years of serving in the army, he returned to Lahore. He remained a wanderer for some time and even his stint with the Government Surplus Stores, Bombay was very short. In 1919, he joined Nawab Mudni’s Theatrical Company, Chennai and then he became associated with Rustomji Poonavala’s Theatrical Company. Eventually he joined as a permanent artist in Motilal Theatrical Company, Bombay. During the 1920’s, he became a well-known personality in the theatrical world. His popularity attracted the film makers and Rustam Poonawala, picked him for the role of Ram Prasad in Imperial Film Company’s film Nek Abla (1932). Then Moti Gidwani gave him a small role of a Marwari in a film. Ghulam came to the lime-light when Director R.S. Choudhary cast him in Madhuri (1932). In this film he played the role of Tikka, the craven prince of the Gulwari tribe, who harasses the princess of Ujjain Madhuri (Sulochana alias Ruby Myers). Soon there was a long queue of films and Ghulam Mohammad was known as the Prince of Imperial Film Company. Accordingly, his salary was raised from Rupees Sixty five to Rupees seven hundred and fifty per month that made him one of richest actors of that era who possessed a car.

Sagar Movietone cast Ghulam Mohammad in the lead role in first ever double version (Hindi and Punjabi) film Ali Baba (1940) directed by Mehboob Khan. The film had melodious music scored by Anil Biswas and it became a hit at the box-office. His second stint in Punjabi Cinema came with Pancholi Art Pictures’s Chaudhary (1941). In this film Ghulam performed the role of the village chieftain Raju Chaudhary. His impressive portrayal of the character was appreciated by movie-goers as well as by the film critics. Impressed by his performance, Dalsukh M. Pancholi signed him for the film Khandan (1942). He portrayed an over indulgent lover Amjad, who kills a gold-digging woman and is jailed. When he is released, he found employment as a gardener and became a father-figure to his employer's son Anwar (Pran) and his fiancée Zeenat (Noor Jehan). He enacted the role of a tyrannical zamindar in Pancholi’s next film Zamindar (1942). After his successful innings in Lahore, he shifted to Bombay where he acted in Jugnu (1947), Ek Din Ka Sultan (1945), Heer Ranjha (1948), Pardesi Mehmaan (1948) and Vidya (1949). In Jugnu (1947), he was the miser and harsh-natured father of Dilip Kumar.

Ghulam Muhammad married on 22 September, 1935 and had four sons Jehangir, Rafique, Shafique and Muhammad Saleem Butt. After quitting the films, he faced lot of financial problems. Prior to his demise, he was travelling on a horse cart from his residence to the shrine of Sher Baba at Mochi Darwaza Lahore, when he met with a car accident. He broke his arm and sustained fatal injuries. He died on March 10, 1961 in Lahore.