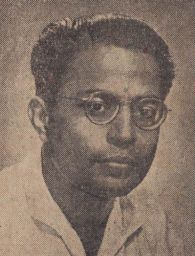 Despite playing a key role in the establishment of the Tamil film industry, K Ramnoth remains largely unsung by film historians. Born in 1912 at Pujapura, Trivandrum, his interest in photography bloomed while he was in the school itself. It is said that he would prefer to go hungry himself, to feed his box camera with film instead. In 1932, on graduating from University College, Tiruvanthapuram in 1932, he headed to Madras for work opportunities. While working as an assistant at the Kodak company, he got acquainted with A. Muthusamy Ayyer. Also known as Murugadasa, A. Muthuswamy Ayyer edited Sound & Shadow magazine. Soon, Ramnoth began writing on cinema for the magazine. Incidentally, in time Murugadasa also went into filmmaking.

Ramnoth had a breakthrough that came his way on the recommendation of G K Sheshagiri, who worked with All India Radio at the time. Ramnoth was hired by Prabhat Cinetone, Pune which was making the Tamil film Seetha Kalyanam (Wedding of Seetha, 1934). It was to be directed by Baburao Pendharkar, the well-known director and actor of the Marathi Cinema. Coming on board as the still photographer for the film was to prove an important development for Ramnoth’s career. His involvement with the film was further enhanced as he was hired to write the screenplay for Seetha Kalyanam. It was a matter of time before he began assisting Pendharkar at Prabhat. At Prabhat, he learned the ropes when it came to using a movie camera from cinematographer Avadoot Rajaram. Through Rajaram, Ramnoth was also introduced to his brother, V. Shantaram, the renowned filmmaker.

With filmmaking firmly in focus, Ramnoth, Murugadasa and A K Sekhar, who worked for Murugadasa’s magazine as an artiste, got together to establish Vel Picture Studio in Madras. The film Sundara Moorthi Nayanar (1937) saw Ramnoth make his debut as the cinematographer. This was followed by two Telugu films as he worked with B N Reddy of Vauhini Studios, making Vandematram (1939) and Sumangali (1940).

World War II in 1942 came with its after-effects and during the evacuation of Madras, Vauhini Studios was temporarily shut down. This saw Ramnoth moving to Gemini Studios where he cinematographed Mangamma Sabatham (Mangamma’s Vow, 1942). Interestingly, it was at Gemini that he also had the opportunity to film documentary footage of Mahatma Gandhi. He filmed Gandhi stopping and talking to people near the welcome arch put up by Gemini at the Hindi Prachar Sabha in Madras in 1946.

In 1947, Ramnoth supervised the production of the Gemini Studios’ film Miss Malini based on R.K. Narayan’s novel, Mr. Sampath. Parts of the legendary film Chandraleka (1948), in particular the famous drum-dance sequence circus scenes, were also shot under his supervision. All these assignments led up to the big one, so to speak when Ramnoth was chosen by Uday Shankar to shoot his film Kalpana (1949), which was made in Madras.

The year 1948 saw Ramnoth moving to Jupiter Studios where he finally made his directorial debut with Kanniyin Kathali (A Maiden’s Friend, 1949). The film was an adaptation of Shakespeare’s Twelfth Night. Ramnoth introduced Kannadasan as a songwriter in this film, who was unstoppable and went on to dominate the Tamil cinema literary scene for nearly three decades. Ezhai Padum Padu (1950) is considered Ramnoth’s best work. The following year, he made Marmayogi (1951), which combined elements of the characters of Hamlet and Robinhood. The film starred M.G. Ramachandran and it was this film that brought stardom within MGR’s reach.

Ramnoth has a fondness for literary adaptations. This was seen in his next film, Thai Ullam (Mother’s Heart, 1952), which was based on Mrs. Henry Wood’s novel, East Lynne. The Malayalam novel by Muthukulam Raghavan Pillai was the basis of his next film Manithan (Man, 1953). Presenting a human story of an erring wife and pardoning husband, the film was far ahead of its times and attracted controversy on release. It did not fare well at the box-office and apparently Ramnoth himself was not sure if the story would be well-received by the conservative moviegoers. Despite the carping of critics, the film boasts one of the best-loved songs of Tamil cinema, Kuyile Unakau Anandha Kodi Namaskaram rendered by M.L. Vasanthakumari.

The following year saw Ramnoth make his debut as a producer with Viduthalai (The Release, 1954). The film, adapted from the play The First and the Last by John Galsworthy, starred Nagaiya in the lead role. However, the film turned out to be a commercial disaster, jeopardizing Ramnoth in the process. He suffered financially and mentally due to its failure. Ramnoth passed away in Secunderabad on 3rd October 1956, at just 43 years of age, leaving behind his wife and two daughters. Two months after his passing, a son was born posthumously.

Ramnoth had exhibited a real talent for cinematography. In one of the films he worked for in 1938, he introduced miniature photography for the first time in Tamil films. The scene showed a downpour of paddy raining down on parched, famine-stricken land. The scene had left viewers awed. Similarly, he worked his magic in Mohini with Lanka Satyam as its director. A scene required to be shot in which the lead pair is seated on a flying horse singing a duet. However, the producer was not satisfied with the shot and called Ramnoth to redo the scene. Ramnoth filmed it with finesse and refused to take credit.

Known to be solitary and quiet, Ramnoth is remembered by colleagues as being patient and even-tempered even when dealing with incompetent workers. His one-time stenographer, Ramamirdham shared how Ramnoth had persuaded him to quit his studio job and become a writer. Ramamirdham went on to become a well-respected writer of contemporary Tamil literature. An admirer of J Krishnamurthy, Ramnoth made sure to attend all the philosopher’s discourses in Madras.

Ramnoth’s filmmaking attempts had brought him neither fame nor money. Many of his films belonged to the category of film noir. He believed in using cinema as an instrument of social change. This was visible in films like Ezhai Padum Padu and Manithan, over which he had control. An agnostic who moved in literary circles, his work leaned towards the literary works of well-established writers in both Tamil and English. Writer R.K. Narayan was his friend and they even planned to adopt two novels of his novels - The Dark Room and The English Teacher.

It was Ramnoth who played a key role in institutionalizing the film technicians by founding the Cine Technicians Association in 1943. The CTA served as a connection between the film industry and the government. However, for his efforts, he was termed a leftist and also won the disapproval of S.S. Vasan of Gemini Studios. The CTA has instituted awards for films and filmmakers in Ramnoth’s memory. To a great extent, the south Indian film industry owes its present position to the pioneering work of K Ramnoth.

Additional information courtesy: History Through The Lens, and The Cinemas of India.