The story begins with Kandan (Chittoor V. Nagaiah), describing to his fellow prisoners how he came to prison ten years ago. The flashback begins: Kandan is an honest and hardworking woodcutter in a village living with his sick sister and her four young children. He loses his job as his employer sells off his business contract. Kandan and his family suffer in poverty. One day, he steals food for the first time from a hotel to feed his sister’s children and is arrested by police inspector Javert (N. Seetharaman). The court sentences him for two years imprisonment. Concerned about the plight of his sister and her children, he escapes from prison to see them. He finds that his sister is dead and is again arrested by the police. The court awards him eight more years of jail for escaping and fighting with the police.

Ten years pass by; Kandan comes out from prison with the little money he earned at the jail for his ten years’ work. Javert orders that he should report at the police station regularly even after release. He learns that the place where he lived earlier with his sister was washed away in floods years ago. He starts searching for his sister’s children but in vain and no one comes to help him.  Hunger and poverty force Kandan to beg for food at a Christian priest Sadhu Uthammar’s (Serukalathur Sama) house one day. The priest welcomes him, shares dinner with him, and offers him shelter.

Kandan decides that he must get money by any means to take revenge on the world. He steals silver articles from the priest’s house and escapes the next day. He is caught by the police, who bring him to the priest’s house to check if the silver articles are stolen from there. The priest informs the police that he gave these articles to Kandan and saves him.  He also gifts Kandan a pair of silver lamps. When Kandan apologizes for his actions, the priest gives him a booklet on making glass items and advises him to start a business by selling the priest’s silver articles. He advises Kandan to be kind to others and to help needy people after he becomes successful.  Kandan starts a glass-making business in a new town;  to avoid being under the constant police scanner, he changes his name to Dayalan and soon becomes a reputed businessman.

As advised by the priest, he opens an orphanage, hospital, and other facilities for the needy. He is loved by the people of the city and soon he is elected  Mayor of the city. Kandan happens to meet Inspector Javert,  now Superintendent of Police, who suspects his past.  Rajam (Kumari N. Rajam), the eldest niece of Kandan,  survived the flood and works in a circus. Ramgopal (T.S.  Balaiah) who comes to the circus, falls for Rajam’s beauty and marries her secretly by giving her false hopes. When  Rajam reveals that she is pregnant, he abandons her after taking away all her jewels. After she gives birth to a  daughter Lakshmi, Rajam starts working in Dayalan’s glass factory, leaving her child with a greedy couple Nagan and  Nagi (P.S. Gnanam), and sends them money for Lakshmi’s maintenance. Rajam’s colleagues complain about her character to the manager of the factory and she ends up losing her job. She happens to meet Ramgopal on the road  but he pretends to be a stranger. Rajam creates a fuss and  Javert arrests her.

The Mayor (Kandan), who watches Rajam pleading with Ramgopal, orders Javert to release her out of pity, without knowing her past or identity. Javert takes this as an insult to his position and informs his colleagues in writing that he knows about Dayalan’s past.  Dayalan gives Rajam shelter and treatment; when she narrates her story, he realizes that she is his own niece.  From her deathbed, she requests Dayalan to send money to get her daughter Lakshmi back and to look after her.  However, his past sins keep chasing him in the form of Inspector Javert. Javert’s complaint is rejected by his superiors; instead, an old beggar is arrested and produced in court as Kandan. Kandan’s conscience forces him to reach the court to confess that he is the real Kandan; he requests that the old beggar be released. Dayalan returns home; when Javert comes to arrest him, Dayalan escapes to take Lakshmi away from the cruel couple Nagan and  Nagi. He assigns the running of the factory to Vedagiri  (S. Bir Muhammad), a trusted associate and son-in-law of  Masilamani Mudaliar (T.S. Durairaj). To escape from Javert, Dayalan moves with Lakshmi to another city and changes his name to Ambalavanar.  Years roll by. Lakshmi (Padmini) and Umakanthan (V.  Gopalakrishnan), Vedagiri’s son, who studies in the same college, fall in love. Ambalavanar comes to know of their love.

Umakanthan stays with Masilamani Mudaliar,  who does not like his grandson participating in freedom movements. Hence Umakanthan shifts residence and stays in Nagan’s house as a tenant. Nagan’s daughter  Anjala (Lalitha) develops a liking for him.

During one of the freedom protests, Javert and his team start shooting to disperse the crowd. Anjala sacrifices her life to save  Umakanthan. Ambalavanar takes an injured Umakanth to his house for treatment.  When the freedom fighters try to kill Javert, the policeman responsible for the killing of many freedom fighters, Ambalavanar saves his life. Javert realizes the goodness of Ambalavanar/Dayalan/Kandan, who keeps moving from city to city to do good to people and feels sorry for him. He notices how Kandan saved the life of  Umakanthan, who fights for the independence of the country. Out of his sense of gratitude and helplessness to expose Kandan to the authorities, Javert commits suicide. Masilamani Mudaliar and Ramgopal come to see Umakanthan during his treatment. Ambalavanar relates Lakshmi’s story and Ramgopal realizes that  Lakshmi is his own daughter. He feels guilty and leaves the place without informing anyone. Ambalavanar gives the silver lamps he received from Sadhu Uthammar to Umakanthan and Lakshmi and advises them on how to lead their lives with love, doing good to society, and dies. Sadhu Uthammar’s messages of “Love is God” and  “Edhal Aram” (giving is our duty) is practiced truly by  Kandan till his end.

The film is based on Ezhai Padum Padu, a Tamil translation by Suddhanandha Bharati of Victor Hugo’s classic Les Miserables.

The film is set in the last decade of British rule in India. India’s nationalistic struggle replaces the French Revolution as the backdrop for the story. The period flavour is provided by props like Queen Victoria’s portrait in the courtroom, horse-drawn coaches, and costumes, particularly those of the policemen. The story stretches over a period of forty to forty-five years and the aging of Kandhan and Javert is made evident through effective make-up. The film is well photographed; its visual bring out the bleakness of a life of poverty imprisonment and of Kandhan’s life as a fugitive. The camera movements are dynamic and tight close-ups are used aptly and intensely. Though the shots are longish, they are quite fluid. The filmmaker resorts to a verbal narration of events in one or two places. But the basic economy of words heightens the impact of the film. The music of the film is subdued and appropriate. For instance, the sound of the inspector’s stomping boots is used to convey a premonition of trouble.

The highlight of the film was Seetharaman’s portrayal of Javert, the loner who builds a wall around himself and single-mindedly pursues Kandhan. After this film, this actor came to be known as “Javert Seetharaman”. Nagaiya’s performances as Kandhan was equally poignant and powerful. He was at the peak of his career at that time.

Ezhai Padum Padu had six songs composed by S.M. Subbiah Naidu. ‘Vidhiyin vilaivaal…’  (sung by Radha Jayalakshmi) picturized on N.  Rajam, was shot in a single take without a cut by the director. It was a technical marvel during that period and leaves an impact even today among film lovers. The other popular songs were  ‘Vaazhvu malarnthathuve…’, ‘Aha yovvaname…’  and ‘Kannan mananilayai…’ (both sung by M.  L. Vasanthakumari), ‘En aasai pappa...’, ‘Aasai  kiliye...’ and ‘Kanivudan thirumbiye paarum...’ 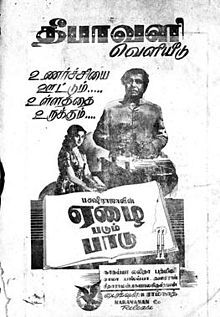 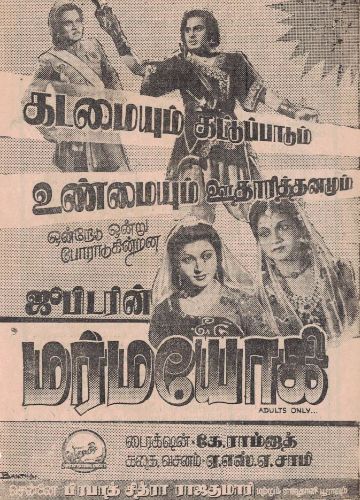