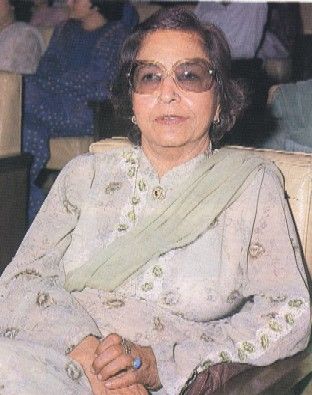 Regarded as the unparalleled queen of gayaki, celebrated ghazal and folk singer, Malika Pukhraj is memorable for her stirring renditions of Abhi toh main jawan hoon which is Hafeez Jalandhri's famous nazm, Faiz Ahmed Faiz's Mere qatil mere dildar mere paas raho, Quli Qutub's Piya baaj piyala piya jaey na, and Lo phir basant aaii, among many others. Known for her considerable contributions to the field of music over several decades, her voice suited both classical and folk music. Paying tribute to her voice, G N Joshi wrote, “Malika Pukhraj’s silvery rich voice and her superb expressive style were ideally suited for rendering romantic ghazals and dadras; she used to present them in such an arresting manner that listeners were at once held spellbound. She displayed rare virtuosity in diverse types of songs for the recordings for gramophone discs and during radio broadcasts. While the ghazals appealed most to the sensuous, her dadras had a unique charm.” The nuances of Urdu poetry added to the sweetness of Purabi and Avadhi in her gayaki. Rendering songs for the 1940 Hindi film, Azadi-E-Watan, as well as for the film Shimmi (1950), she also produced the latter along with her husband in Pakistan.

Born in 1912 in Hamirpur Sidhar, Jammu, British India into a family of professional musicians, she was named Malika meaning Queen at birth by Baba Roti Ram 'Majzoob', a spiritualist in the Akhnoor area. Her second name - Pukhraj which translates as yellow sapphire was chosen by her aunt, a professional singer-dancer. Like other music gharanas, her family held a key position in the realm of music. She hailed from a family where singers entered professional life after being properly trained in the art. She is said to have started reciting nohas and marsiyas (elegies) at the age of five. Receiving music lessons in Delhi from Nirith Bhav, she was trained by Ustad Ali Baksh Kasuri, father of esteemed vocalist Ustad Bade Ghulam Ali Khan. She would receive training in the classical dance form which accompanied the thumri, from Ustad Mamman Khan.

At the tender age of 9, she performed at the coronation ceremony of Maharaja Hari Singh of Jammu. The impressed royal appointed her as a court singer in his durbar. She lived here for 9 years, after which she went on to establish herself as a well-known professional singer. Her distinctive and clear singing style was to become her trademark.

Despite belonging to an orthodox family, as an artiste and performer she essayed two distinct worlds with aplomb—singing bhajans at the court of Raja Hari Singh, while also enjoying the finer things of life such as good music, poetry, food and dress. Inspired by the philosophy of ‘Woh kahte hain ranjish ki baatein bhula do’ (they say forget the world of pain), her recitation is believed to have conveyed her audiences to a world of romance and fantasy. Imbuing her lyrics with warmth, she modulated each note with energy, blending music and poetry in the subcontinent’s tradition of Bhakti and Sufi poetry. She went on to become especially renowned for her Pahari geet or folk songs from the hills.

Malika Pukhraj rendered two songs in the Dinshaw Bilimoria directed Hindi film, Azadi-E-Watan (1940), namely Dil lagi meri koi kya jane, and Duniya hai ek khwab. Both were ghazals penned by Daad, and Munshi Dil respectively. She also sang for All India Radio until Partition in 1947. Later, in Pakistan, she would produce the film Shimmi, along with her husband Shabbir Husain Shah. Directed by Munshi Dil, it starred Ajmal, Bibbo and Santosh Kumar.

Migrating to Pakistan post Partition, she continued to give private concerts, establishing her name as one of the top singers of the sub-continent. Adhering to strict no-alcohol rules at her mehfils, or musical gatherings, she was known for her high level of professionalism. Her fame grew via radio performances with composer Kale Khan at Radio Pakistan, Lahore. Some of her popular songs include Be zubani zaban na ho jae-raz-e-ulfat aeyan na hojae, Zahid na keh buri ke yeh mastane aadmi hein, Wo kehte heih rajish ki batein bhula daen, Her ek lawa-e-rangeen ki yadgar hun mein, Mein jo madhosh hua hun, and Nigah-e-yar jise ashna-e-yar kare.

At the time of Independence, of the four film studios that existed in Lahore, Pakistan the one that had been initially allotted to Afzal Himaliyawala, was later re-allotted to Malika Pukhraj in 1954. It was later renamed Malika Studio. In recognition of her contribution to music, she received the Pride of Performance Award from the President of Pakistan in 1980. When All India Radio celebrated its golden jubilee in 1977, she was invited to India and awarded the Legend of Voice award.

Living in the old city of Lahore, she went on to marry Shabbir Husain Shah, a government officer. They had six children. Continuing to sing after marriage, Malika also took to teaching music and was considered a strict instructor. She also recorded her memoirs in the book Song Sung True.

Malika Pukhraj passed away in Lahore, Pakistan on 4 February, 2004. Her nazm recitations and ghazal renditions, recorded in the conventional couplet form, continue to enthral, even as her music creates nostalgia for times long past. Her daughter Tahira, also a singer, continued in her style, and rendered many of her mother’s famous songs.