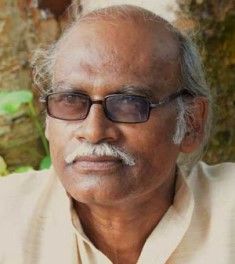 Nirad N Mohapatra was a veteran Odia filmmaker, director and producer. A multi-faced talent, he discontinued his post graduate studies in Political Science and joined Film and Television Institute of India, Pune (FTII) to pursue a direction course in 1968. Five years later, he joined the same institute - FTII as a lecturer. Mohapatra is best remembered for his first Odia feature film Maya Miriga (1984), which won international fame. Adjudged the second best national film at the Indian Panorama, it was also declared best third world film at Mannheim-Hiedelberg International Film Festival. The film also won the special jury award at the Hawaii Film Festival, U.S and the Critics Week of Cannes in France. Mohapatra did not make any more feature films, concentrating instead on documentaries for which he also won several awards. In the year 1985 he was invited to visit four universities in the USA to lecture on film while he also served as a member of the National Film jury and member selection panel for Indian Panorama several times.

Born as Nirad Narayan Mohapatra on 12 November, 1947, in Orissa, an Eastern state of India, he was the eldest of seven siblings. His father was a freedom fighter in pre-Independence India, as well as a journalist and later entered Indian politics post-Independence, while his mother was a school teacher. Along with his parental influences which shaped his value system, he was also exposed to both rural and urban life which made him aware of the realities of middle class life. He shone in academics and possessed an avid interest in History and Literature. His interest in cinema was also sparked during his childhood days, aided further by the proximity of a cinema theatre near his residence in Bhadrak, Orissa. Most importantly, Nirad was a keen observer of human nature and relationship. In time, his work in film would be imbued with the same sensitivity and understanding.

On completing his BA (Hons) with distinction in 1967, Nirad enrolled for postgraduate studies in Political Science (Utkal University). However, he did not continue with the course, choosing instead to pursue his love for cinema. He went on to enrol in the direction course at the Film and Television Institute of India, Pune (FTII) in 1968. His keen understanding of the theory of cinema saw him graduate in 1971 with a first class diploma in film direction. He went on to join the FTII faculty of film direction as a lecturer in 1972-1974, during which time several talents such as Girish Kasaravalli, Jahnu Barua, Saeed Akhtar Mirza, and Ketan Mehta were students.

Mohapatra went on to establish a film society in 1974 in Bhubaneshwar, Orissa, called Cinexstasy that ran successfully till 1983. The aim of the film society was to popularise good cinema and create an opportunity for members to watch classics of world cinema along with an analysis by professionals. Cinexstasy became immensely popular, sparking the interest of audiences in world cinema and also inspiring creative minds to join FTII and pursue a career in films. He also worked as an editor for the film section of film and literature journal Mana Phasal, as well as continued teaching at FTII as a Guest Lecturer. He contributed to several national journals as a freelancer, made several documentary films and also conducted a film appreciation course at the Utkal University.

Mohapatra remains most memorable for his 1984 film Maya Miriga. It was his first feature film, completed on a shoestring budget. With the cast comprising mainly amateur actors, the film was shot at the beachside town of Puri in Orissa. The film, focused on the process of disintegration in a middle class joint family living in a small town in Orissa, it explored the issue of the joint family, the aspirations of its individual members, and its collapse. Mohapatra intended the film to be a long and compassionate look at its characters, watching the members of a family inexorably progress towards their break-up. Belonging to a small-town middle class joint family himself, he was intrigued by its dreams and nightmares. He saw in the joint family system considerable warmth, fellow-feeling, and a sharing of experiences and responsibility, as well as its challenges, the need for freedom for oneself, and the social reality of the middle class, which is at the centre of conflict. At its core, in Mohapatra’s own words, the film is about certain emotional bonds which make up a way of life and the painful realisation that they cannot last.

Besides serving as a member of the national film jury and member selection panel for Indian Panorama several times, he was also a jury member for 5th International Children’s film festival, Bhubaneswar. A member of governing council, Film and Television Institute, Pune, he was also a member of the NFDC script committee for Orissa, as well as two times member of the Academic Council, Satyajit Ray Film and Television Institute, Kolkata. Mohapatra also served as chairman, academic council, Biju Patnaik Film and Television Institute, Cuttack, Orissa and member, governing council, SIET, Bhubaneswar as well as taught at the Film School of KIIT University, Bhubaneswar as a guest faculty. Over the course of his life he was remained involved in various capacities as member to organisations involved with film and television studies.

On the personal front, he married Sabita Mohanty in 1978. Although the marriage was arranged, Sabita shared a love for cinema and had attended the film appreciation course and Cinexstasy. Nirad Mohapatra died of cardiac arrest on 19 February, 2015. He was 67. He was survived by his wife, and two sons and a daughter.