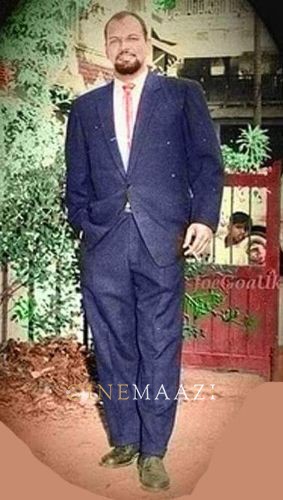 Robin Vaz is a towering figure—both literally and figuratively, as he served the Konkani stage for five decades. A well-built personality, with good features, and over a hundred kilos in weight, he has been the propagator of Goan folklore.
He migrated to Bombay in the year 1960 to make his future. He worked for a multi-national company Lee and Muirhead Shipping and Clearing Agency, serving there for 25 years. After his work hours, he would entertain audiences with his folk songs. He was attracted to the songs and dances of the Kunbi tribe who lived behind his house.
Vaz’s love for drama took birth when his father took him to watch Pai Tiatrist-Joao Agostinho’s Kunnbi Jaki. He was instantly smitten by the Konkani play. He got an opportunity to act in plays as a child artist at the age of 11, and thus took his steps into the world of Konkani drama. In this manner he went on to work for topmost directors like Jephsis Hitler, Kamat de Assolna, and Saluzinho D'Costa. His experiences inspired him to write and direct his own dramas which he commenced at the young age of 15 with Bebdo Put (Drunkard Son) staged along with professional dramatists. Once in Bombay, his association with this set broke and he was unable to pursue his passion. Hence, he concentrated on folk songs and presented his songs and skits on All India Radio, Bombay. Since his songs had a different style, the listeners liked the innovation and were receptive to them. This was also noted by Bombay-based dramatists such J. P. Souzalin, Kid Boxer, Anthony D'Sa, Saib Rocha, Souza Ferrao, Alfred Rose, C. Alvares, Jacinto Vaz etc. They engaged him in their dramas where he could display his talent. He also participated in freedom fighter Mussolini Menezes’ plays, the names of which are Ravji Ranno (Raoji Rane), Padrinchem Bondd (Priest’s Revolution), and Martyrs of Cuncolim. His acting in late J. P. Souzalin’s drama, Panch Mister Horkache (Five Glorious mysteries) earned him plaudits.
Robin Vaz has written and directed  27 dramas the names of which include Put Konnacho (Whose son), Ajente Monteiro (Agent Monteiro), Shantichem Login (Shanti’s wedding), Opinion Poll, Dada, Barrabas, Ghatki Solomon (Solomon the traitor), Biatin (Beatitude), Sam Juanv Baptis (St.John the Baptist), Sadam Hussain, Xikon Brut (Educated brute), Bhensanche Vantte (Division of property), Adanv ani Ev (Adam and Eve), Fatima Saibinn (Our lady of Fatima), and Miss Isabel.
He had a special talent for producing Goan folk songs and dance. That is the reason he formed a group which has shown programmes all over India. He has produced three albums of songs—I love Goa, Visions of Goa and Unforgettable Hits. The names of his famous songs are Backbaychem Varem (Backbay’s breeze), Darling Lucy, Vare va, Mogachem Tufan (Love’s storm), Shantichem Login (Shanti’s wedding), Mhataro Forsu (Old Man Francis), Teach me Konkani, Pipirmitt (Peppermint), Ek cheddum (A lady), Nustekaram (Fisherfolk), Goenkar Ani Goenkarponn (Goa and Goanness), Iskolak Koso (How in school), Beautiful Goa, Portuguese song, Mar Khavia (Take  the beating), Goa, Ghovaxim Mortam (Dying before the husband), Konkani Bhas (Konkani language), and Ek Cheddum Loknach (A girl folksong).
He has also excelled in Konkani films such as Nirmon (Destiny, 1966), Sukhachem Sopon (Dream of Bliss, 1967), Kortubancho Sonvsar (World of activity, 1970), Mhoji Ghorkarn (My wife, 1969),Bhuierantlo Munis (Caveman, 1977). In Nirmon, he is seen in the Kunbi Avraddi or Kunbi worker song. His song Gaddi ghevunu zatreku voitam (Going to the fair with a bullock cart) in the Konkani film Sukhachem Sopon is a highlight. Al Jerry Braganza had cast him in the main role of his Konkani film Custoba the Great but due to some reasons the film did not see the light of day. Goa’s Kala Akademi bestowed on Vaz the Lifetime Achievement Award. Robin Vaz passed away on 16 November, 2002.