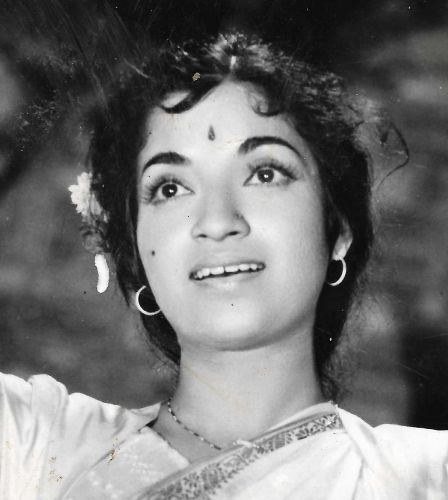 Sandhya is known for various Hindi and Marathi films directed by V Shantaram, who discovered and launched her and whom she later married. Debuting with the Marathi film Amar Bhoopali (1951), she went on to become famous for her performances in films such as Jhanak Jhanak Payal Baaje (1955), Do Aankhen Barah Haath (1957), Navrang (1959), and Pinjara (1972). She was acknowledged for her dancing skills and emotive quotient, as seen in the song Arre jaare hatt natkhat from Navrang wherein she performs as a woman as well as a man in the same number.

Born Vijaya Deshmukh, her father worked in theatre as part of the behind-the-scenes team. She started off as a theatre artiste, along with her sister Vatsala. Moving to Bombay in search of work, she responded to an advertisement put out by filmmaker V Shantaram. He was seeking new faces to cast for his film Amar Bhoopali (1951). She auditioned for the role but, as film historian Zafar Aabid Balani revealed, did not leave much of a mark on Shantaram. However, while she lacked classical features or outstanding talent, it was her voice that drew the producer-director’s attention. Eventually, as none of the other candidates lived up to the mark, Shantaram ended up offering the film to Vijaya. His condition: that she learn to dance for the part.

Rechristened Sandhya by her director, she trained rigorously in dance and performed excellently in the film. Amar Bhoopali was a true story about a simple cowherd who has a natural gift of poetry. Set in the waning days of the Maratha confederacy, in the early 19th century, it called on people to rise again against the foreign enemy. Sandhya played the role of a dancer. A success, the film was also nominated in the category of Grand Prize of the Festival at the 1952 Cannes Film Festival.

Sandhya went on to feature in most of Shantaram’s films. Her next film saw her feature alongside Jayshree, who was the heroine, in Parchhain (1952). The film told the tale of a man who is accidentally blinded by a woman. Ironically, he goes on to fall in love with the same woman as the voice of the maid who looks after him is the same as hers. The film saw Shantaram using the voices of Jayshree and Sandhya astutely in its narrative.

Teen Batti Char Raasta (1953) saw Sandhya play an impoverished girl named Kokila. She is considered unattractive because of her dark skin, but she is secretly a radio star with a wonderful singing voice. Sandhya wore dark makeup for the role.

Sandhya was known to be extremely dedicated to her craft. When Vyjayanthimala declined Shantaram’s Jhanak Jhanak Payal Baaje (1955), the film came to Sandhya. The role required an actress who was proficient in the pure dance form of kathak; a skill that Sandhya lacked, as she was not formally trained in the dance form. However, she rose to the challenge, undergoing rigorous and intensive training in classical dance from her co-star and choreographer Gopi Krishna. The two played Kathak dancers who are preparing for an important competition, but face opposition from their dance guru when they fall in love. Sandhya’s flawless dance performances during shooting apparently had an impressed Shantaram commenting that he didn’t miss Vyjayanthimala at all. The film was a big success and went on to win four Filmfare Awards as well as the National Film Award for Best Feature Film in Hindi.

Starring opposite V Shantaram in Do Aankhen Barah Haath, she played Champa, a toy seller who fascinates the warden and inmates as she walks outside their jail. In Navrang (1959), she essayed the plain-looking wife of the lead character, who is a poet. He weaves a mythical image of her as his stunning muse. The film included a Holi song Arre ja re hatt natkhat, wherein she dances with an elephant wearing anklets. Based on the Krishna-Radha theme, the dance was performed by Sandhya who performed graceful moves as a woman and also wore a mask and performed the moves of a man in the same song-dance sequence. The dance was a novelty, never seen before on the Hindi film screen, and was widely appreciated. It was choreographed by Shantaram and Sandhya.

In Stree (1961), based on Shakuntala’s story from the Mahabharata, Sandhya shot with real lions, practicing their handling by learning the technique from a lion tamer. In her last major role in the Marathi version of Pinjara, she played a tamasha artiste who falls in love with a school teacher who is determined to reform her.

Sandhya remained completely dedicated to V Shantaram and his Raj Kamal studios. She declined work with other banners, although there were evidently no strictures on her. She made it clear that no matter how much money she was offered, her loyalties would always lie with the institution that made her famous; namely, Raj Kamal studios.

She and Shantaram shared a deep professional and personal bond. He threw several creative challenges her way, and she would unfailingly rise to the occasion. Sandhya and Shantaram were married in 1956.

In 1998 she had made a guest appearance in the film Kareeb. Rarely seen in public, in 2009, Sandhya made a special appearance at the V Shantaram Awards ceremony to commemorate the 50th anniversary of V Shantaram’s film Navrang (1959).