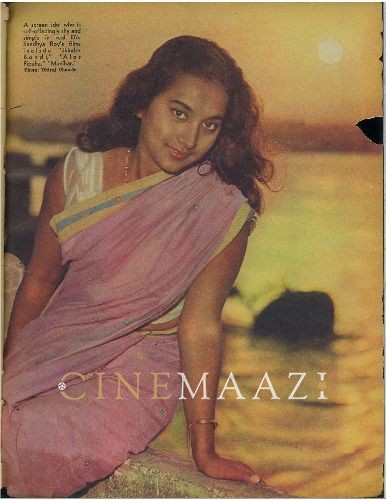 Veteran award-winning actress of Bengali cinema, Sandhya Roy is celebrated for imbuing her characters with a spirit of their own. Breaking the stereotype within what deceptively appear to be conventional roles, she is synonymous with the golden era of Bengali cinema which was richly influenced by Bengali literature. She is known for her performances in noteworthy films such as Ganga (1960), Teen Adhyay (1968), Sansar Seemantey (1975), Baghini (1968), Fuleshwari (1974), Dadar Kirti (1980), Baba Taraknath (1977), Ashani Sanket (1973), Alor Pipasa (1965), Nimantran (1971) and Ganadevta (1979). She also featured in Hindi films such as Asli-Naqli (1962), Rahgir (1969), Bandagi (1972), Pooja Ke Phool (1964), and Jaane-Anjaane (1971). Starting her career at the age of 16 with Rajen Tarafdar’s Antariksha (1957), she was often cast in mythological-themed films, and as the perfect homemaker; however, she has skillfully essayed a range of diverse characters from a prostitute, to a ghost-wife and more. She remains one of the most under-rated actresses in Bengali cinema despite delivering many memorable performances from the end of the 1950s to the early 1980s. Perhaps her best films were those directed by her husband, Tarun Majumdar. She has won the BFJA award three times as well as the Filmfare Awards East Best Actress for her performance in Ganadevata. Stepping into politics, in 2014, she contested a seat in the Lok Sabha election for the All India Trinamool Congress. She won the 2014 Lok Sabha elections from Medinipur constituency and became a member of the Parliament of India.

Born on 11 April, 1941 in Nabadwip, Bengal Presidency, British India, she was orphaned by the time she was nine years of age. Compelled to quit her schooling, she moved to Calcutta to live with her elder sister and brother-in-law. Her tryst with films began when she was around 10, and had visited Radha Studio to watch the shooting of Mamlar Phol (1957). She got the chance to feature in a crowd scene that was being shot that day. It led to a bigger role in Rajen Tarafdar’s Antariksha, for which she earned the not-inconsequential sum of Rs. 150 per day. Films like Nagini Kanyar Kahini (1958), and Brindabon Leela (1958) followed; however it was with Ganga (1959) that she became widely known. Her powerful performance in this Rajen Tarafdar film, which is based on a path-breaking novel by Samaresh Bose, is considered a milestone in her career. Injecting her portrayal with an infectious charm, she essayed the role of Gamli Panchi, a young girl who is infatuated with a man named Bilas, who does not love her back.

She had another standout film - Maya Mriga (1960). This Chitta Bose-directed family melodrama with a screenplay by Moni Burma was adapted from a story by Nihar Ranjan Gupta. She was paired opposite the young and dashing Biswajeet in the film; their pairing would remain popular over the next decade. The film went on to be counted among the 100 biggest hits in the history of Bengali cinema.

Among her many noteworthy performances, she played Chhutki, the young wife whose husband is not around, in Satyajit Ray’s Ashani Sanket (1973). She movingly conveyed the pathos of her character, who is unable to bear the pangs of hunger when a famine strikes the village, and surrendering to a trafficker for food, migrates to the city.

Using her ability to change her appearance and style according to the demands of a role set against a rural or urban backdrop, she played a range of diverse roles over the years. If Sansar Seemantey saw her portray in a prostitute in a Calcutta red-light area, Kuheli (1971), she played the ghost-wife of a zamindar who haunts the mansion. Surya Tapa (1965) saw her essay a woman forced to step into the role of a young widow with a child to restore the child to the family it belongs to, while in Thagini (1974), she played a young girl trapped in her father’s scam of tricking young men to marry his daughter and then decamping with the gold on the wedding night. Baghini saw her portray a young woman involved in a bootlegging racket, who kills a man who tries to rape her, and confesses to her crime.

Acting in scores of films, her work has covered genres such as thrillers (Kuheli), to adaptations from literature (Nimantran, Ganadevata, Dwiper Nam Tiya Rang, 1963), as well as musicals (Amargeeti, 1983), light romance (Ektuku Basha, 1965)), costume dramas (Jhinder Bandi, 1961), comedies (Bhranti Bilash, 1963) and mythologicals (Baba Taraknath, 1977 and Harishchandra Shaibya, 1985). Interestingly, she did not shy away from doing character roles and supporting character parts even when at the peak of her career, as seen in films like Balika Badhu (1967), Teen Adhyay (1968), and Sriman Prithviraj (1973).

Working with the top leading men of Bengali films such as Biswajeet and Anup Kumar, as well as celebrated actors like Soumitra Chatterjee, Uttam Kumar, and Samit Bhanja, she later graduated to character roles in films such as Debipakshya (2004), Nabab Nandini (2007), Maa Amar Maa (2009) and Aarohan (2010). More recently, she returned to the screen with Anindya Chattopadhyay’s children’s adventure film Manojder Adbhut Bari (2018), in which she played the role of an elderly Ranima opposite Soumitra Chatterjee.

Her work in cinema has earned her multiple awards. She was honoured with the Banga Bibhushan, the highest civilian award in West Bengal, for her contribution to Indian cinema in 2013. Previously, her performances have won the BFJA Award on three occasions, namely Best Supporting Actress Award for Tin Adhay in 1969, Best Actress Award for Nimantran in 1972, and Best Actress Award for Sansar Simante in 1976. She earned the Filmfare Awards East - Best Actress Award for Ganadevata in 1979. Other honours include the Bharatnirman Award in 1997, and the Kalakar Awards - Lifetime Achievement Award in 2005.

In 1967, she married filmmaker Tarun Majumdar who directed her in films like Ganadevta, and Nimantran. They later went their separate ways; being a very private person, she never went public about her personal life.