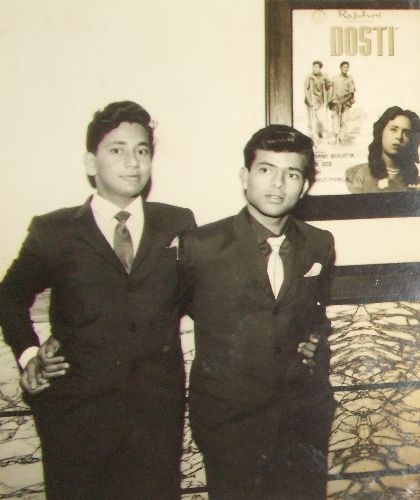 Sudhir Kumar Sawant or Sudhir Kumar as he is also known, is an actor who is best known for the film Dosti (1964), a black-and-white Hindi film directed by Satyen Bose, produced by Tarachand Barjatya, and distributed by Rajshri Productions. The film focuses on the friendship between two boys: one blind and the other physically-handicapped. Sudhir Kumar and Sushil Kumar Somaya were cast in these roles in the film which also starred actor Sanjay Khan. Sudhir Kumar played the blind singer in the film. One of the top ten highest grossing films of 1964, Dosti was declared a super hit at the box office, and also entered the 4th Moscow International Film Festival. It also won six Filmfare Awards out of seven nominated categories. The film was remade in 1977, in Malayalam (and Telugu) as Sneham.
Hailing from a Maharashtrian family that lived at Lalbaug, Parel, Sudhir Kumar passed his SSC from the Aryabhattam School. His maternal uncle Prabhakar, was the chief make-up artist at V Shantaram’s film company, Rajkamal Kalamandir.
Before the hit Dosti, Sudhir Kumar had acted in the film Sant Gyaneshwar (1964) which released the same year as Dosti. Sudhir Kumar along with Sushil Kumar were signed on by Rajshri Productions for a three-film deal. However, Sudhir Kumar opted out of the contract, and went on to act in the Madras-based AVM’s Laadla (1966). This was followed by Jeene Ki Raah (1969) as well as the Marathi film, Ghar Chi Rani (1968). However, his career stagnated, due to various reasons. By the end of the 60s he was out of the film industry.
His disappearance led to conspiracy theories circulating such as that he had been harmed by a superstar actor, and that he had suffered an injury to his throat during the time of the Mumbai riots of 1993. However, later a family member confirmed that he had succumbed to cancer. Sudhir Kumar Sawant passed away on 12 January, 1993.