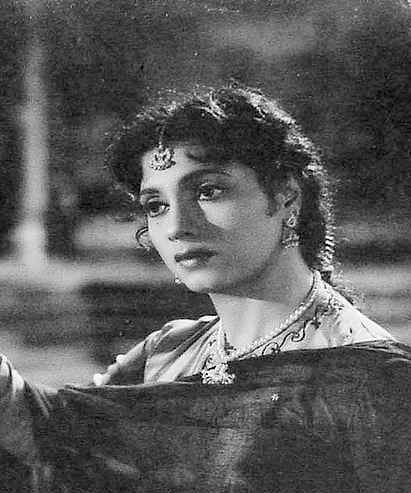 This image of Jayashree is a part of the original article

“I am now like a bird set free from its cage and am delighted to work in various films as a freelance artiste”, observed Jayshree, former wife of V. Shantaram, the ace producer-director-actor, in the course of an interesting chat with me the other day at her residence at Peddar Road.”The freedom that I enjoy at present”, she added, “makes me feel that I am walking on air and the opportunity that I now have for acting in a number of films under different directors provides a new ray of hope in my life.”

Jayshree who was out of filmdom for quite some time and who had all along been working as a permanent artiste of Rajkamal Kalamandir, stages a comeback in Pushpa Pictures’ costume drama Mehndi (1958), fast nearing completion under the direction of S.M. Yusuf. Other pictures in which she is currently starred are Raman Productions’ Apna Paraya and Jhuki Jhuki Akhiyan (Technicolor). “I decided to resume my work in films”, Jayshree said, reclining in her sofa, laid out in her artistically-decorated drawing room, “just to support myself and my children. Otherwise, I don’t care for film fame.”

Charming and graceful, Jayshree has poise and talent, a talent which none can dispute. Though she is thirty-three, she looks like a teenage girl, brimming with enthusiasm. The discipline and training she has had under Shantaram for as many as 14 years have stood her in good stead. “I admit” she observed with reminiscences of her past clouding her beautiful eyes. “I had excellent training in histrionic art under the able guidance of Shantaram, whom I consider as one of the greatest directors of India. But for him, I wouldn’t have become a consummate artiste. I, therefore, owe a deep debt of gratitude to him.”


“But,” Jayshree went on, “my life has not been a smooth-sailing affair. I had swallowed many a bitter pill. My faith in people had been rudely shaken. I do not know who are my enemies and friends! At times, I feel I am groping in the dark but at other times I feel confident of waging a successful battle to win happiness and peace, which I long to have. The hard experiences of my life have taught me good lessons and they are bound to shape my career. Of course, I respect Shantaram as my Guru, though destiny has separated us as husband and wife. Even now, when I start from the house for my work in the studios, I pay my obeisance to his photograph, which adorns my room, and pray for his blessings. My regard for him as a director is so much that I am prepared to act in his films like any other artiste in case he offers me a role. It’s really unfortunate that a divorce had become inevitable in our marital life in spite of my sincere efforts to be loyal and devoted to him. What cannot perhaps be cured must be endured. That’s the stand I am now taking.”

Jayshree went on, “I had led a regimented life from my tender age, I often wondered how the critics, who judges out performances in films, looked like. I am therefore glad to meet the members of the Fourth Estate like you. The credit of interviewing me for the first time goes to you. Here’s a chance for me to open my heart and express my views quite freely but I propose to restrain myself to a considerable extent. I am a woman first and foremost and I would like to act as such with self-abnegation. My work is now dear to me and more than that my children – a son aged 13 and two daughters aged 11 and 8 – are dearer to me. This much I would say. I would never, never put my children in films, though my elder daughter Rajeshree is fond of acting and dancing.”

Speaking about herself, Jayshree said that she was born as the youngest child of a middle-class Marathi family in Bombay on March 4th, 1924. Her father was a great lover of music. As a toddler she showed good promise as a singer and dancer. Her parents, therefore, didn’t bother about her education. She was destined to become an artiste, so her parents thought. With their encouragement, she made her acting debut on the Gujarati stage. She was hardly 12 then. The first role that she played on the stage was that of Narad. She gave such a charming performance that people realized that acting was in her blood.

From the stage to the screen was not a big jump. Jayshree’s good work on the stage led her to the land of make-believe in the normal course. Her maiden vehicle was National Studios’ Marathi film Chandra Rao More. She was then 15 and the year was 1939. The success of this film paved the way for further contracts. In her second film Nanda Kumar in which she portrayed Radha, she consolidated her position as a dependable artiste. Her third picture was Mazi Ladki (1939), another Marathi production, which became popular with family audiences.

Jayshree’s talent and versatility came to be noticed by V. Shantaram. The latter, convinced of her potentiality, cast her in Prabhat Studios’ Shejari (1941), the Marathi version of that memorable Hindi film Padosi. The picture was acclaimed by the people and so was Jayshree. The acquaintance between her and Shantaram developed in course of time into friendship and then blossomed into love. They were married in 1940.

The marriage opened a new chapter in Jayshree’s life. “I believe in marriage”, she said, “and I think there can be no greater security for a girl than to be married. If what has happened to me does not happen to other women, wifehood is a blissful state. So far as I was concerned, I fulfilled my duties as a housewife and continued to act on the screen at my husband’s behests.” Shakuntala (1943) was her first Hindi film, which was produced and directed by V. Shantaram under the banner of his concern Rajkamal Kalamandir. It proved to be a great hit. The picture ran for more than a year, wafted her up to stardom. She then appeared in Dr. Kotnis Ki Amar Kahani (1946), which again proved highly successful. This was followed by Dahez (1950). Who can forget her dynamic performance in this film? Parchain (1952) was her next vehicle and then came Subah Ka Tara (1954). Both these were notable for the sterling performances of Jayshree.

The lull in her career that followed Subah Ka Tara has not affected her name and glory as a versatile artiste. Her fan mail is still large and there are many who are longing to see her back on the screen. “I do not wish to work in a number of films at the same time and earn more money. It is enough if I can earn that much money, which will keep me and my children and my dependents – my sister and brother-in-law – above want. I am not, therefore, going to work in more than three films at a time. I would like to pick and choose my roles. If you ask me, I love to act in tragic and dramatic roles, roles which have character behind them,” observed Jayshree in conclusion.

Cinemaazi thanks Sudarshan Talwar for contributing this interview conducted by T.M. Ramachandran in 1958.
The film posters used are from Cinemaazi archive and were not part of the original article.
2415 views