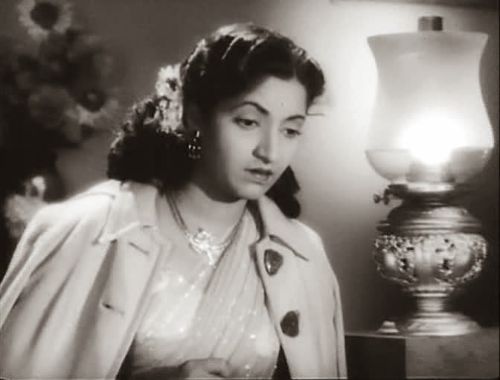 An accomplished actress, Jayashree acted in Hindi as well as Marathi language films such as Chandra Rao More (1939), Mazi Ladki (1939), Shejari (1941), Shakuntala (1943), Dr Kotnis Ki Amar Kahani (1946), Dahez (1950), Parchain (1952), and Subah Ka Tara (1954). A delicate-faced beauty gifted with a sweet voice, she had started her career on stage as a child artiste, before transitioning to films. She was married to noted filmmaker V Shantaram—the couple later divorced—and had three children. She remains synonymous with Shantaram’s film productions as well as Prabhat Studios’ masterpieces.

Born on 4 March, 1924, the youngest child of a middleclass Marathi family, she spent her childhood in Goa’s Korgaon village. Her father was an ardent music-lover. Even as a toddler, she displayed a penchant for singing and dancing. Her parents, believing she was destined to become an artiste, did not think it necessary to encourage her education, but instead supported her training in singing. Moving to Bombay at age 10, she made her acting debut on the Gujarati stage. She was 12 at the time. She began taking regular lessons in song and music from Master Krishnarao, a famous musician of the time. Her first performance as Narad was so entrancing that she left audiences convinced that she was born to act.

Her talent in theatre enabled her crossover to cinema, and she went on to make her debut in films. Among her early films are National Studios’ Marathi film Chandra Rao More (1939). She was 15. The film was a success, ushering more offers her way. Her release, Nanda Kumar (1938), in which she essayed the part of Radha, strengthened her standing as a dependable artiste. Her next release, the Marathi film Mazi Ladki (1939) became a popular hit with family audiences.

Her talent and versatility came to the notice of noted filmmaker V Shantaram, who went on to cast her in Prabhat Studios’ Shejari (1941). It was the Marathi version of the hit Hindi film Padosi (1941). The story concentrated on the topical issue of Hindu-Muslim unity, making a strong plea for the same. Made against the backdrop of communal tension at the formation of the Muslim League in the pre-Independence era, it became a super hit by virtue of its strong story, excellent music and fine performances by its cast. Playing a central role of a young rural Hindu girl, she also sang two songs for the bilingual, namely Lakh lakh chanderi tejachi nyari duniya, and Diwali Diwali aali hasat.

Her acquaintance with Shantaram developed into friendship, and love, and they went on to wed in 1940. After the closure of Prabhat Studios in 1948, following which Shantaram founded Rajkamal Kalamandir, she continued to act, at Shantaram’s behest. She featured in her first Hindi film Shakuntala (1943), in which she essayed the title role. Produced and directed by V Shantaram under his banner Rajkamal Kalamandir, the film was a thumping success. It ran for more than a year in theatres, elevating her stardom. In Dr Kotnis Ki Amar Kahani (1946), she played the Chinese character Ching Lan, whom Dr Kotnis (V Shantaram) falls in love with. The film was based on the life of Dwarkanath Kotnis, an Indian doctor who worked in China during the Japanese invasion in World War II. It was screened in competition at the 1947 Venice Film Festival.

Dahez (1950) saw her deliver an emphatic performance, followed by Parchain (1952) and Subah Ka Tara (1954), which again had notable performances by her. Directed by V Shantaram, Dahej was a social family drama film based on the dowry system, while Parchain was a romantic melodrama. Subah Ka Tara was a social romantic film. Directed by V Shantaram, she played the role of a young widow pursued by a young man (Pradeep Kumar) who falls in love with her, but is unable to marry her due to societal norms and subsequently becomes insane.

After a lull in her career that accompanied her divorce, she returned to the screens as a freelance artiste. No longer part of her ex-husband’s Rajkamal Kalamandir, she made a comeback with Pushpa Pictures’ costume drama Mehndi (1958), directed by S M Yusuf. Produced by A A Nadiadwala, she co-starred opposite Ajit in the film, which was based on Umrao Jaan Ada by Mirza Hadi Ruswa. Other subsequent films included Raman Productions’ Apna Paraya and Jhuki Jhuki Akhiyan.

She emphasised that she had returned to films to support herself and her three children and not because she cared for fame. She remained grateful to Shantaram for the excellent training in histrionic art he had imparted to her. Acknowledging him as one of the greatest directors of India, she recognised his valuable guidance in developing her into a consummate artiste.