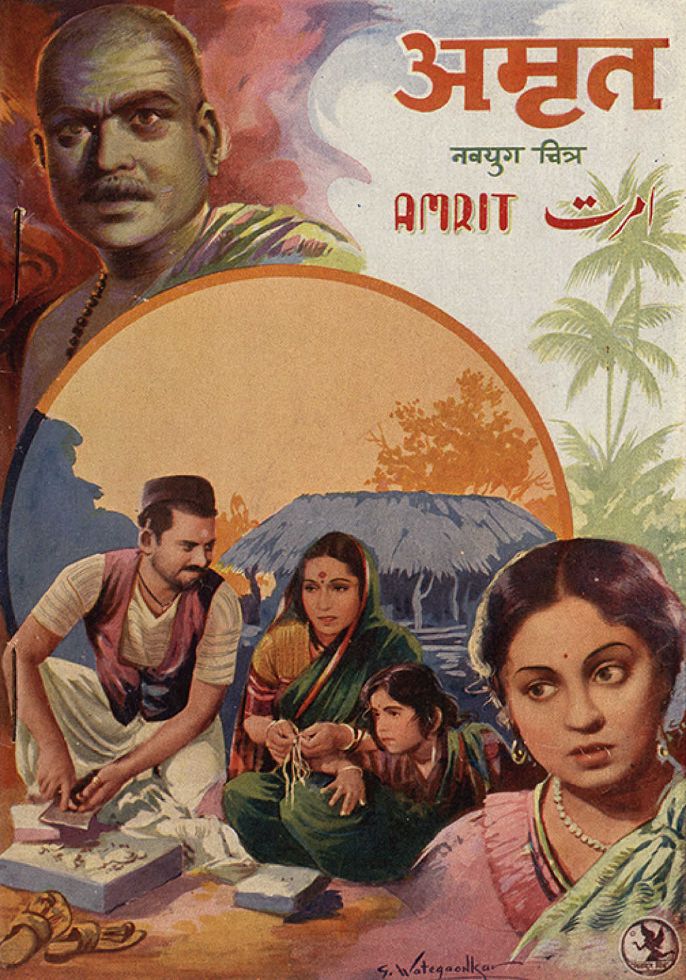 Image credit: Cinestaan
Lalita Pawar and Baburao Pendharkar Shine
An Entertaining & Instructive Picture
The picture opens with a very high flown ideal of “God creating the world and expecting the human beings to live in it in a loving brother-hood etc., etc., and then suddenly the theme deteriorates and dissolves itself into a prohibition campaign against toddy and liquor drinking.

Khandekar’s erratic treatment of film plots is not new to us, but in this one, he scores a remarkable hit by thinking of one thing and writing about another, so completely different. It is the directorial genius of Vinayak that saves Khandekar from himself.

The name “Amrit” is the least consistent part of the picture which should have been called “Jamuna, Chamarin.” The picture would then have secured a little more human appeal.

The story cannot be told in detail here because the names of the characters are different in the two versions, Marathi and Hindusthani. This is at best a stupid practice which only helps in revealing to us the bankruptcy of brains in the writers who, it seems, cannot find names which can be common and yet popular for both the versions. If these different names are given to

Stress the individuality of the version writers, it is a regrettably stupid indulgence in conceit which only helps to create confusion. I shall therefore relate the story in symbols and signs. There is a rich landowner with as a daughter and a friend of the son thrown as grace on this side. On the other side of the fence are a shoe-maker, his beautiful wife and a smart little daughter. The first party is rich and the second party is poor. The second party, moreover, is addicted to drinks thereby giving the son of the first party a chance to make some indecent proposals to the wife of the second party.

But the wife of the second party spurns the man inspite of her own husband being irresponsible.

The name “Amrit” is the least consistent part of the picture which should have been called “Jamuna, Chamarin.” The picture would then have secured a little more human appeal.

The story seems to be having three themes—(1) an illegitimate romancing between the rich man and the poor beautiful woman (2) pointing out the social evil of drinking, (3) and the eternal clash between the rich and the poor. The original paper theme of “God creating a world etc., etc.,” dies with the title. And the three themes which rush in and out of the reels never catch up with their justification completely at any stage.

The prohibition scenes are made unreal the dramatic and look very exaggerated. The song sung by the toddy drunkards popularizes toddy drinking. If toddy drinking people can sing so well after all the toddy that is sent in, it is not at all a bad job drinking toddy. The song, therefore, fails in its desired effect.

Vinayak and Meenaxi are absolutely unnecessary for the main story. In fact, they could have been entirely removed and the story would have improved considerably. In the direction of Meenaxi and himself, Vinayak commits the very same mistake which Shantaram has committed in Shejari (1941). For some reason best known to Vinayak, Meenaxi’s scenes are unnecessarily pulled out and made boring. If the idea was to put Meenaxi on the screen as much as possible to make her more popular, it has failed in its purpose as Meenaxi, having no logical existence in the whole plot, becomes, at best, a drag on the otherwise fast tempo of the story.

The love antics of Meenaxi and Vinayak cannot be called acting. Their sequences at best become a crude pantomime of sex-starvation certainly a poor show for an intellectual like Vinayak. Vinayak must make up his mind whether he wants to produce a picture for its own sake or for the joint interests of Meenaxi and himself. He is falling into an easy rut that leads to the suicide of a career.

Meenaxi is the sex-starved daughter of the rich Hindu landlord, evidently from one of those so-called higher communities. She is a grown-up woman, who is shown as tickling her sex with some suggestive paintings. Imagine her-a Hindu eligible girl-singing a song of her empty bed and herself thirsting for a mate. The song, Meri Suni Sej Pady is vulgar and suggestive. Its Marathi version, however, is thankfully toned down.

The whole picture is shot in delightfully pleasant and rural surroundings which by their very natural grandeur take the vote spectators.


Reverting to the story, the landlord of the first party is found exploiting the poor people of the village. Idioms and parables of social philosophy soon fill the air like sparks but they fail to light up anything. All the social philosophy is wasted as the drama centres mainly round the individuals and fail to touch the community. The theme. The problem or the intention, whatever it is, that inspires the picture does not go beyond the embryo.

The rich son’s romantic leanings for the poor shoemaker's wife are soon turned by the crafty poor into an expose which brings the rich landlord to his knees. Quite too suddenly, this man who had amassed money all his life by hook or crook. turns the corner and becomes a different man. And for this a convenient storm is used, a little child is sacrificed and the face of Shiva’s image is also lighted by the lightening. Nowhere are the intrinsic truths in the philosophy given a chance to convince or convert the man who had to be made human by storms, sacrifices and other melodrama.

As is expected, the story ends with good cheer for all.

Forgetting for a while the fundamental defects in the story, which are all of the story writers creation. The director has done a really swell job of it all by lending it a fast cinematic tempo, particularly in the last six reels, and in maintaining audience interest by dovetailing entertainment and melodrama. It is a director’s picture every inch of it, and quite his very own in the first four reels where Vinayak and  Meenaxi give some mixed sex-play.

The photography is decidedly beautiful, particularly the artistic framing of the outdoor shots. The whole picture is shot in delightfully pleasant and rural surroundings which by their very natural grandeur take the vote spectators.

The first five reels called for a  little more care in sound recording.

There is little to choose between Lalita Pawar and Baburao Pendharkar. Both are superb and well cast and well-matched. Salvi comes close to giving an excellent performance as the rich landlord. The disappointments of the show, however, are Vinayak and Meenaxi. They were in the picture without any reason for their stupid performance. Both seem to have forgotten to act and keep on looking at each other a little too much and a little too affectionately.

And yet, after all, done and said, “Amrit” still remains a first-class picture and as there is plenty to entertain and to learn in those fifteen reels of celluloid, you cannot afford to miss this picture.

This article is a reproduction of the review published in Film India in July 1941.