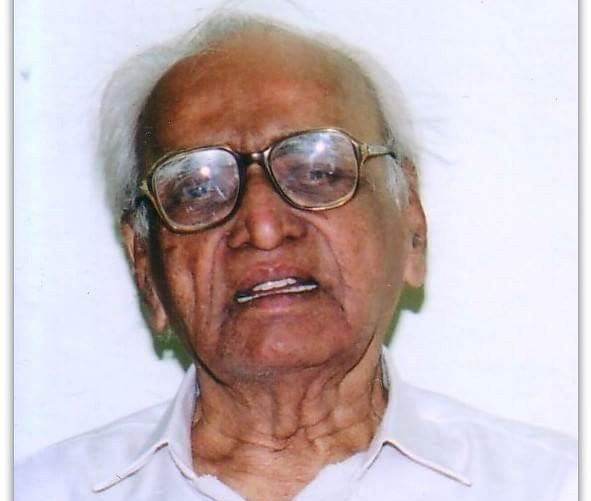 Datta Dawjekar. Image Courtesy: Beete Hue Din
English  |   हिंदी
No one can ignore the contribution of Marathi speaking artistes towards the enrichment of Hindi cinema and music. Among stalwarts like Dadasahab Phalke, Jagtap Brothers, Bhalji Pendharkar, Master Vinayak, Vasant Rao Joglekar, V. Shantaram, Pandit Gobind Rao Tembe, Vasant Desai, Snehal Bhatkar, C.Ramchandra, Lata Mangeshkar and Asha Bhonsle, there is an almost unheard name that of music director Datta Dawjekar, who, with complete dedication, contributed to the film music and then with changing times chose to lead a retired life.
Just by watching his father and his students playing, Datta Dawjekar too started playing Tabla. He learnt classical singing from Suresh Bhai Mane, the brother of well-known classical singer Hira Bai Barodkar and eventually started writing and composing songs for Ganpati celebrations
Partition had also left an everlasting impression on Hindi film music. Gifted artistes like Noorjehan and Ghulam Hyder had migrated to Pakistan. Newcomers like S. D. Burman, C. Ramchandra, Mukesh and Mohammed Rafi were fast gaining recognition. At the same time there came a young singer with a very thin, soft and sweet voice whose style of singing was very different from that of well-established singers like Shamshad Begum, Zohrabai Ambalewali and Amirbai Karnatki from that era. And in no time did this new singer named Lata Mangeshkar dominated the film world and completely changed the face of the film music scenario. The credit to introduce Lata to playback singing goes to the composer Datta Dawjekar. Lata’s debut film as a playback singer was a 1947 release Aapki Sewa Me whose music director was Datta Dawjekar.


Datta Dawjekar was born in Pune. His father Babu Rao Dawjekar was a Tabla player with the theatre company Aryasubodhini which was owned by Sohrab Modi’s brother K. K. Modi. Just by watching his father and his students playing, Datta Dawjekar too started playing Tabla. He learnt classical singing from Suresh Bhai Mane, the brother of well-known classical singer Hira Bai Barodkar and eventually started writing and composing songs for Ganpati celebrations.  He toured the entire country as a Piano player for the well-known actress Shanta Apte’s Ballet Group and whenever he would get time he learnt to play the Jaltarang from Pandit Dattopant Mangal Vedekar. In the year 1935, Datta Dawjekar joined the music director Suresh Bhai Mane as his assistant at Pune based film company Saraswati Cinetone.
Ramchandra Gopal Torne, who was the owner of Saraswati Cinetone, is also known as the producer-director of the first film made in India titled Pundalik which was released on 18th May 1912 in Mumbai. But Pundalik (1912) did not attain the title of being the first indian film because this was a recording of a popular Marathi play. Also, the cameraman was a Britisher and hence the film was processed out of country i.e. in London. Thus the honour of the First Indian Film is given to Dadasahab Phalke’s film Raja Harishchandra (1913) which was released a year later than Pundalik (1912) on 3rd May 1913. The first talkie film made under the banner of Saraswati Cinetone was a Hindi-Marathi bilingual Shyam Sunder which was made in the year 1932. This was also the debut film of actor Shahu Modak. Apart from a dozens of Marathi films, Hindi films like Awara Shehzada (1933), Bhakt Prahlad (1934), Bhedi Rajkumar (1934), Krishna Shishtai (1935), Raja Gopichand (1938), Sach hai (1939) and Awaaz (1942) were also made under the banner of Saraswati Cinetone.
“Lata met me there because she was searching for a job. She was around fourteen years old at that time. I liked her voice and singing and helped her get a job at Prafull Pictures at a monthly salary of eighty rupees. And then later when Master Vinayak informed me that Lata was the daughter of late vocalist Dinanath Mangeshkar..."
After some time Datta Dawjekar resigned from Saraswati Cinetone and joined music director Pandit Gobind Rao Tembe as his assistant for Navyug Studio’s underproduction Marathi film Savangadi. Meanwhile he used to often come to Mumbai from Pune to give singing lessons to Durga Khote and Naseem. Datta Dawjekar was also very quick in writing down notations of any song and this quality had Sohrab Modi quite impressed. After the completion of the film Savangadi, Sohrab Modi offered a job to Datta Dawjekar at his production company Minerva Movietone which was to look after its music department and Datta Dawjekar spent a few years there as well. The first film Datta Dawjekar got as an independent music director was Navyug Studio’s Municipality (1941).  In the year 1942 Datta’s second film Sarkari Pahune was made under the same banner and both these films proved to be big hits. In the year 1942, Master Vinayak, one of the partners of Navyug Studio left this company and shifted to Kolhapur where he founded Prafull Pictures.  Datta Dawjekar was once again made the in-charge of Prafull Pictures’s music department.

It was at Prafull Pictures where Lata met Datta Dawjekar. During a meeting at his residence at four Bunglows-Lokhandwala area of Andheri (West) a few years back Datta Dawjekar said, “Lata met me there because she was searching for a job. She was around fourteen years old at that time. I liked her voice and singing and helped her get a job at Prafull Pictures at a monthly salary of eighty rupees.  And then later when Master Vinayak informed me that Lata was the daughter of late vocalist Dinanath Mangeshkar my inclination towards her grew because Master Dinanath Mangeshkar who had died very young was a very respectable name among musicians at that time. Lata was very young when she was forced to shoulder the responsibilities of a big family, but still she was very witty and spirited.  Her favourite prank was to mimic the people around, thus making everybody laugh in the process.  I used to bribe her with chocolates to make her sing her father’s compositions which were no less than a precious treasure for me.”

Datta Dawjekar composed music for three films for Prafull Pictures viz. Majha Baal (1943), Chimukla Sansar (1943) and Gajabhau (1944). In the year 1945 Prafull Pictures shifted from Kolhapur to Mumbai, and Datta Dawjekar also came down to Mumbai where he got a job with Young India Gramophone Company to give lessons to singers apart from just looking after the recording work. Chandrama Pictures (Mumbai)’s Vasant Joglekar directed film Aapki Sewa Me was Datta Dawjekar’s first Hindi film as a music director. Lata Mangeshkar’s debut song as playback singer paa lagoon kar jori re shyaam mose na khelo hori was from the same film. It was a thumri which was picturised on actress Rohini Bhate. There were two more solos of Lata in the film Aapki Sewa Me (1947) viz. ek naye rang me dooje umang me and ab kaun sunega mere mann ki baat. The remaining five songs were desh me sankat aaya hai (Rafi, Sajan), meri ankhon ke taare (Rafi), Gulshan Me Mere Thi bahaar (Sajan), phulbagiya lehraaye (Mohantara Talpade) and mai teri tu mera (Rafi, Mohantara). All these songs were penned by the renowned actor Mahipal who was also a very good poet.

Datta Dawjekar was based in Pune till that time but in the year 1952, on Lata’s persuasion, he permanently shifted base to Mumbai and joined Music Director C. Ramchandra as his chief assistant. He worked with him for 10 years but simultaneously also kept on composing for Marathi films, plays and documentaries as an independent music director. According to Datta Dawjekar, “I wrote and composed a song ina mina mona bass for a Marathi children play which eventually turned into the hit song ina mina dika from C. Ramchandra’s film Asha (1957)”.

Fondly called ‘DD’, music director Datta Dawjekar was born on 15 November 1917 in Pune and passed away in Mumbai on 19 September 2007 at the age of 90 years.