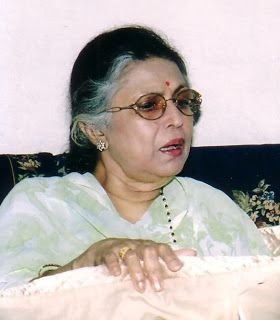 Suman Kalyanpur. Image courtesy: Beete Hue Din
English  |   हिंदी
Suman Kalyanpur is the owner of a very melodious voice. She succeeded in achieving recognition of her own during the years of Lata Mangeshkar’s monopoly and sang under the baton of almost all the top composers of the period. Many people rightly believe that she could not reach the stature and position which her talent really warranted. In spite of having all the mandatory characteristics required to make a mark in the field of playback singing like great knowledge of classical music, a melodious voice, and a wide range, the Hindi cine world never let Suman Kalyanpur come out from the shadow of Lata Mangeshkar. During her career spanning nearly 3 decades, she sang more than 3000 film as well as non-film songs and ghazals in around a dozen languages and dialects including Hindi, Marathi, Gujrati, Panjabi, and Bhojpuri before bidding adieu to the film world as public taste changed.

I met Suman Kalyanpur a couple of years back at her Khar (West) home. During that meeting, she spoke in detail about her personal and professional life. Suman Kalyanpur’s father Shankar Rao Hemadi hailed from an elite Saraswat Brahmin family belonging to Mangalore, Karnataka. He served on a top post in the Central Bank Of India and was posted to Dhaka (now Bangladesh) for a very long period. Suman Kalyanpur was born on 28 January 1937 in Kolkata. Apart from father and mother Seeta Hemadi, there were 5 daughters and one son in the family with Suman being the eldest among her siblings. The family shifted to Mumbai in the year 1942.

Suman had always been interested in Painting and Music. After completing schooling from Mumbai’s famed Columbia High School, She got admission to the prestigious Sir J.J.School Of Arts for further studies in Painting. Simultaneously, she started learning classical vocal from Pune’s Prabhat Films’ music director and a close family friend, Pandit Keshav Rao Bhole. According to Suman, initially singing was just hobby to her but gradually her interest in music increased and She started learning it professionally from Ustad Khan Abdul Rehman Khan and Guruji Master Navrang.

According to Suman, “Everybody at home was inclined towards arts and music but public performances were strictly prohibited. Still, I could not say no to an offer to sing for the All India Radio in 1952. This was my first public performance after which I got a chance to sing for the Marathi film Shukrachi Chandni released in the year 1953. At that time, Sheikh Mukhtar was making the film Mangu (1954) whose composer was Mohammed Shafi. Sheikh Mukhtar was so impressed with my Shukrachi Chandni songs, that he got me to sing three songs for the film Mangu (1954). However, due to some unknown reasons, later O.P.Nayyar replaced Mohammed Shafi, and only one of my three songs, a lullaby Koi Pukaare Dheere Se Tujhe was retained in the film. Thus, I entered the Hindi cinema with the 1954 release Mangu.

Immediately after the film Mangu, Suman sang five songs under the baton of composer Naushad for the film Darwaza (1954), which was produced by Ismat Chugtai and directed by Shahid Lateef. Since Darwaza released first, it is generally believed to be Suman Kalyanpur's first Hindi film. In the same year (1954), Suman sang the film version of O.P.Nayyar's hit ensemble song Mohabbat Kar Lo Ji Bhar Lo Aji Kisne Roka Hai with Rafi and Geeta Dutt for the film Aar Paar (1954). According to Suman, She had a couple of solo lines to sing and her services were used, more, as a chorus singer in this song. This proved to be the only song she ever sang for O.P.Nayyar.

Suman married a Mumbai based businessman Ramanand Kalyanpur in the year 1958 and thus, became Suman Kalyanpur from Suman Hemadi. Suman was at the peak of her career in the 1960s. She sang for almost all the ace composers of the time. Her voice and style of singing were so close to Lata Mangeshkar's that whenever there was a rift between Lata and her composers or co-singers, Suman Kalyanpur was the one who benefitted from it. Her songs with Rafi recorded during that period especially proved to be big hits.

With the arrival of a new generation of composers and singers in the 1970s, Suman Kalyanpur's assignments gradually dwindled. The ensemble song Rang Jama Ke Jayenge for the 1981 release Naseeb proved to be her last released song. According to Suman, “the songs which I recorded after Naseeb either remained unreleased or were released with another voice as my part had been dubbed by some other singer. I sang a solo and one duet with Mohammed Aziz in the Govinda starrer film Love 86. But when the film and its music released, the songs had Kavita Krishnamurthy singing them in my place. The same thing happened in Ketan Desai's film Alla-Rakha with Anu Malik as the composer”.

During her nearly 28 years long career, Suman Kalyanpur not only achieved a respectable position in the field of playback singing but also won approximately a dozen awards including Phalke puraskar (1961) from Rasrang (Nasik), Sur Singar Sansads Miyaan Tansen Puraskar (1965 & 1970), Maharashtra State Film Award (1965 & 1966) and the Gujrat State Film Award (1970 to 1973).

Now, a new building has replaced the original building named Anand Kunj in Khar (West) which had Suman Kalyanpur's residence. On investigation, we came to know, that, after her husband's death around 5 years back, Suman ji now lives with her married daughter Charu Agni at Khar (West) Road no. 12. She was publicly seen in a couple of felicitation functions in 2010 when she was awarded Lata Mangeshkar Puraskar-2009 by the Maharashtra Government. But, now, she has turned reclusive and doesn't entertain outsiders. Attempts to contact her on the phone have also been thwarted as she refuses to, even, attend the calls. Due to this, we failed to reach her this time for further discussions on her career.