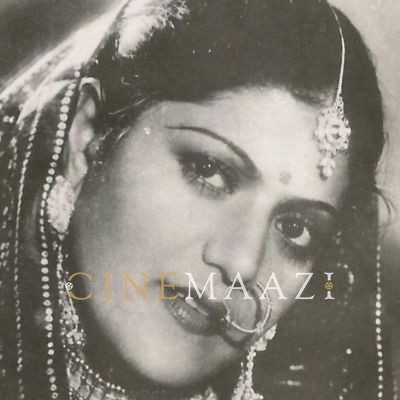 This image is taken from Cinemaazi archive.

A film fan rarely expects to find this favourite star as utterly charming off the screen as she appears on the screen. But still, he hopes in his heart that if by some miracle he should meet her he would not be too disillusioned. No one likes his dreams to be shattered or to find that his idol has feet of clay.

If you were to meet Sardar Akhtar you would not be disillusioned. In fact, you would probably be bowled over by surprise.

When I set out on this interview I had a picture in my mind of what a film actress would be like in real life. Her face would be too vividly painted, she would be aggressive in her manner of speech, and she would have a tremendous ego.

Sardar exploded all my theories. But let me tell you in a more orderly fashion of what happened in my interview.

I visited Sardar one afternoon in her flat at Marine Drive. As I waited for her in her drawing-room I had a chance to look round and see how the rooms were decorated.

They are superbly furnished. Her dining room suite with its oval table topped with black glass and chairs upholstered in red leather must have cost a small fortune. What attracted my attention in the drawing-room were the chairs and sofas covered with a delicate pink brocade and the photographs of Sardar which decorated every wall.

I had barely had time to absorb all this when Sardar appeared. As a matter of fact, I didn't realise it was Sardar at first because she looks so petite and tiny in real life. I just stared down at her from my monstrous height and wondered who she was. She greeted me cordially in her soft friendly voice and I said to myself "You nit-wit, this is the woman you have come to interview and you just sit there staring."

A SISTER BORN FOR STARDOM

Then I roused myself and tried to make pleasant conversation. This wasn't difficult because Sardar and her sister who was with her, make one feel at home straight-away.

This married sister of Sardar's, could be a film star any day, she wants, I'm sure. She was dressed in her native Punjabi costume.

Sardar looked delicious in a blouse and sari of virginal white with silver jewellery on her arms and round her throat. White does wonderful things for a woman. It makes her look young and fresh and sweet and it would take a Frenchman with all his gestures to describe to you how Sardar looked.

Since my eye had first been attracted by the room I asked Sardar if she was responsible for the designing of it. She said "Yes, I always like to plan the rooms myself because after all I have to live in them, and so they must suit my particular taste or they would irritate me."

Sardar also told me that nearly all her spare time is spent at home so she likes it to be a nice home. She is that rare thing in the film world a home-bird.

BORN WITH A SLIM FIGURE

Next, I asked Sardar if she did special exercises or dieted in order to keep her figure so beautifully slim and well proportioned. Here her sister replied for her. "why should Sardar diet when her figure is naturally slim?"

Then Sardar said "Yes, I eat anything I like and I'm not one of those keep-fit fiends who are always doing exercises," It's nice to know, isn't it, you Sardar fans, that your idol isn't troubled with excessive fat? That would be too, too unromantic.

Sardar told me about her makeup. She uses a good soap for her skin and a Palmolive shampoo for her hair which is soft and lustrous. I noticed she had on very little make-up and this was expertly applied. She says she believes that women should only use tones of make-up to enhance their beauty and slightly brighten their natural colouring. She only uses dark shades of make-up for the screen where it is necessary.

Sardar's favourite colour is green and she wears this colour very often. Like all normal woman she loves pretty things so she has a particularly large wardrobe of gorgeous saris and blouses. For her films she wears saris and jewellery supplied by the film company, but when she start acts in modern roles she often wears some of her own saris.

She likes playing simple country girl parts best and her favourite part was the one she had in Woman (1940). Sardar is in private life a very simple modest young lady so it comes naturally to her to play these roles. Next time you hear some cynic saying of her "Oh she looks terribly modest and young but I bet she is not like that in real life", you just slap him down. Take it from me, Sardar is like that in private life.

Since Sardar believes that "there's no place like home" all her hobbies are home hobbies. She is a voracious reader and she sews and very often makes her own blouses. Knitting is another pastime of hers and since she has several little nieces she always has a reason for knitting little coats and socks.

She is not one of those horribly energetic and athletic women, with large muscles, who are constantly rushing off to games of tennis and badminton. That is why she is so essentially feminine and softly rounded.

Sardar says "The life of a film star is very strenuous." She has to work for long hours under powerful lamps which give off great heat, and she is continually on her feet. So her hours off duty should be peacefully spent in resting or gentle recreation. One thing, she considers a gentle recreation, is going to see a film. This may seem a busman's holiday, but even film stars enjoy being entertained.

She goes to American and British films too and admires Bette Davis, Norma Shearer and Vivien Leigh among the actresses and has a special passion for Charles Boyer films. She likes serious films and does not admire or enjoy crazy comedies.

Sardar says she would not change her film work for any other. I know she does not work only for the sake of the money she makes, because her family is not poor. Naturally, she welcomes the money (only a fool wouldn't) because it makes her Independent and it's wonderful to know that one is not beholden to anyone for money. But she loves and enjoys her work chiefly because it is a means of expression for her artistic nature.

What I found remarkable about her was that she showed absolutely no signs of professional jealousy. When I praised certain stars, her praises for them were even louder. I asked her opinion of certain of her fellow workers and she had only good things to say of them.

Here is an important point for all you stricken male fans. Sardar is not married. She has lived a full life and had a remarkable career but she has remained single, probably because she has not yet met the man that every school girl and every woman dreams about.

She will not be content with second best. She prefers to be single, and who wouldn't if they had a career like hers!

She has always been at the top. She never had to work her way up the hard way via the extra ranks. She's going to stay at the top for many years to come.

She is a fine girl in Sardar Akhtar and I was pleased to have had a chance to meet her. She was charming enough to make me feel as though the pleasure had been entirely hers as she said good-bye to me after driving me to my destination in her grey Buick.

I hope that next year there will be two grey Buicks, and the year after a Rolls Royce as well, as she speeds on to still greater fame which will assuredly be hers!

This article was first published in Film India in 1941. The image used in the article is taken from Cinemaazi archive and it was not part of the original article.