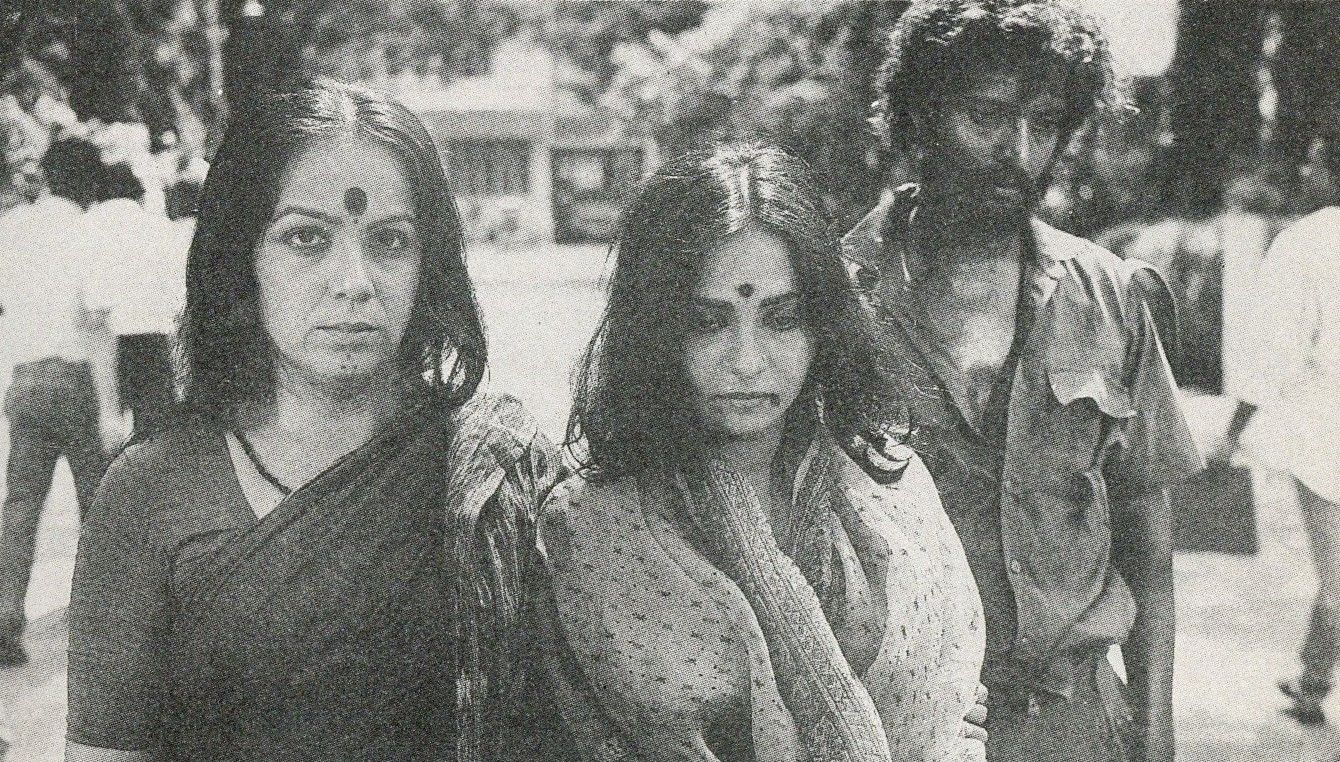 1986 was an year of extremes for the Telugu film industry. About 25% of the year's 130 odd films were a success at the box-office. There was a clear pattern: a film was either a tremendous success—or a total flop!

Though some films have made considerable money, they are still regarded as failures, because of the heavy expenditure on production. The trend that began a couple of years ago, of small buyers purchasing films for different areas, continued and a number of new film distribution concerns have sprung up. As a result, the producer who was always at the end of the queue to receive money for his film, is now the first to collect his costs, plus profits, on his production.

This peculiar trend of the market has destabilised the established and traditional distributors; some have closed shop, some are lying low hoping for better days.

For the cinegoer in Andhra Pradesh there is a wide choice. Every week, on an average, three Telugu film are released, besides one or two Hindi films. If the word spreads that a Telugu film is good, it makes a record collection—at the cost of other releases. Audiences have also developed a taste for Hindi and English fare.

In 1985, 110 films were released while this year, two dozen more films hit the market.


The year opened with the record success of Pratighatana (1985), a film made by Usha Kiran Movies. This film is being remade in Hindi too as Pratighat. It is a political film—with a sentimental thrust too—and has won the audience over with its highly dramatic depiction of how rowdy elements, with criminal records and police cases against them, become MLAs and MPs; oppressors and law-breakers have graduated into champions of justice.

The industry sat up and noticed that a film could be a hit, even with artistes not of the top rank. Thus Pratighatana—with its small budget and its record collections—has become a trend setter. Many more films were made in this style and unknown artistes like Charan Raj and K. Srinivasa Rao have become famous overnight. They are much in demand now.

Sadly Pratighatana's director, T. Krishna, died of blood cancer in October at the young age of 34. He was just six films old, and his demise is considered a major setback to the Telugu film industry. His six films, starting from Neti Bharatam (Today's India, 1983) and ending with Repatipourulu(Citizens of Tomorrow, 1986), have given a new direction to progressive filmmakers in the Telugu industry. T. Krishna was meant to direct the Hindi remake too.
The recent Ardharatri Swatantram (Freedom at Midnight), produced and directed by Narayana Murthy, is said to have inspired Krishna. The film features for the first time (and for the last time too) T. Krishna in the opening scenes, as the guru of the revolutionaries waging war against the exploiters of tribal people living in backward areas. The film released in the third week of November is still going strong; it brought alive, for the public, the news reports about 'encounters' between the police and revolutionaries working in villages.

K. Viswanath made two outstanding films this year, Swatimuthyam (1986) and Sirivennela (1986). K. Viswanath's name is become a synonym for artistic films imbued with social purpose. Swatimuthyam is the story of a childlike, good-hearted imbecile, with the exceptionally talented Kamalhasan in the lead role. This film was entered for the Oscar. Sirivennela features Sarvadaman Banerji (of Adi Shankaracharya (1983) fame) in the main role, of a blindman who is a natural flautist; his talent is recognised, and he becomes known nationwide.

Jandhyala, another notable director, made the successful semi-commercial 'social', Sitarama Kalyanam (1986), featuring Balakrishna—Chief Minister N.T. Ramarao's son. He also experimented with creating for hero-of-the-masses Chiranjeevi a comic, Chaplin-type image in Chantabbai (1986). However, for Jandhyala this year is the 'Year of America' for he has spent almost three months in the States, making two films for Telugu people settled there.
The year saw the rise of new stars in the Telugu film field. While Balakrishna retains his lead among the new generation of heroes, Akkineni Nagarjuna (veteran A. Nageswara Rao's son) hit the headlines with Vikram (1986) which was also his debut film. However, with his second film, Capt. Nagarjuna (1986), a flop, it was time for him and his producers to work out where they had gone wrong.

The other newcomer of promise is Venkatesh (producer D. Rama Naidu's son). Venkatesh is being considered as the most likely alternative by producers who want to make films with Chiranjeevi, but cannot get dates from him. Venkatesh's first film, the lavish Kaliyuga Pandavulu (1986) made by his father, is a runaway success. So is his second film, Brahma Rodhulu (1986) in which he is co-starred with veteran Nageswara Rao (who is his father-in-law too now, in real life).

Others to watch are Kalyana Chakravarthi, who played the main role in Athagaru Swagatham directed by Kodi Ramakrishna, and Tulasiram, whose semi-comic Pasupu Thadu has done well.

For the established actors like A. Nageswara Rao, Sobhanbabu, Krishna and Krishnamraju, the year has brought a mixed bag of successes and failures. Krishnamraju breathed a sigh of relief with the big success of his historical, Thandra Paparayudu, released in October. It is a big budget film, and still doing well in many centres. He plays the title role.
For Krishna, this is also the year he took on the new role of director His own banner, Padmalaya Movies, made Simhasanam simultaneously in Telugu and Hindi. The Hindi production is titled Singhasan and was a miserable flop. The Telugu version ran averagely, but compared to the money spent, the returns were meagre. With Naapilupe Prabhanjanam (1986), Krishna recovered lost ground. The film is a broad caricature of N.T. Rama Rao's rule of Andhra Pradesh as Chief Minister. Krishna made this film for political ends, as he belongs to the Opposition (Cong-I). The film would have been a failure, but for the help rendered, ironically, by a Telugu Desam party MLA, Sripathi Rajeswar, President of the All India NTR Fans Association. Rajeswar started a campaign in the second week of the film's run, demanding its withdrawal—as a result, the audiences grew from week to week, culminating in the film's hundred-day run.

Chiranjeevi's films were all big-budget ones and they did not do well; generally speaking, it was an unsuccessful year for this superstar of Telugu cinema.

There was a definite trend among producers to opt for low-budget films. Talambralu (1987) produced by M.S. Reddi and directed by Kodi Ramakrishna, Vishwanath's Swatimuthyam and Sirivennela, and others like Sravana Sandhya , Sravanti, Anadiga Aadadi, etc. (all 1986) show which way the wind is blowing.

The big disadvantage in Andhra Pradesh for film producers who want to make small films, is the 'slab system' imposed by the State Government in collection of entertainment tax. Whether the theatre gets filled or not, a certain percentage of the house collection has to be paid as tax. For the low-budget cinema, this amounts to suicide, as theatres are not likely to fill in the early days—not until the word has gone around that the film is good and worth seeing. Meanwhile, the tax amount exceeds total returns. Besides, theatre rental charges are high. TV wields its own sword to cut into weekly collections. On Saturdays and Sundays, when films are shown on TV, income in theatres falls nearly by 25%. Even on weekdays, collections have come down due to the serials telecast in the evenings. This must be a national phenomenon.

But Andhra Pradesh with the maximum number of the theatres in the country, and making the maximum number of films, is facing that much more hardship.
In Telugu, there are as yet no TV serials worth the name. A former film artiste, young Pradeep, ventured on a couple of productions which are still to hit the TV screen, while the one being telecast currently Oka Sobha Katha, is poor in quality. Another serial, made by veteran film director Tatineni Prakasa Rao, is yet to find a sponsor.

1987 will hopefully see the industry turn the corner. There is enough potential among young and upcoming directors like Vamsee, for instance (Sitara, Manchu Pallki). But the producers' taste is still the villian to overcome. Very few directors— like Viswanath, for instance—can dictate terms to them, or change their attitudes.

This article was originally published in Indian Cinema 1986. The images used in the feature are taken from the original article.
662 views