The boy Amar exasperated his father Rai Saheb Badriparsad in a variety of ways. He liked to climb house-tops when the slightest slip meant certain death. He was utterly unafraid and blunt to the point of impertinence. He detested his father's love of money and said so. Above all the Rai Saheb, a firm believer in Destiny hugged an obsession that the brat was born unlucky. So he planned to get rid of him by sending him to a school in distant Dehradun. But Destiny on which he put such blind faith had other plans. On the way to the railway station the family coach crashed against the level crossing, killing Amar's mother, brother and sister.

The tragedy knocked the bottom out Rai Saheb's life. From hostility towards Amar he now developed an intense attachment. To provide a woman's love to his motherless son he even consented to marry again. How the gods must have laughed.   .. for by this marriage Rai Saheb Badriparsad sealed his own fate. The bride, a widow with a boy of her own, entered her new career with a violent hatred of Amar.

Years rolled by Amar grew into a ne'er-do-well. The bitterness in his heart settled into a conviction that he was unloved and unwanted in the world.

At a neighbourhood cafe, Amar met Shampoo, the dancing girl, who gave him the first taste of love. he did not like the flavour. With a heart aflame with passion, she was not prepared to accept defeat. The dagger she flourished constantly, however, held no terrors for Amar. He loved life so little, he was not afraid to lose it.

On this melodramatic scene came someone who cared for his life and wanted to share it with him. It was Kumkum,m a playmate of his infancy and a client of his step-brother Anil, who had turned building contractor Suspicious of love, Amar resisted this attractive onassault with banter, but Kumkum filled his life with sunshine and laughter. All his defences broke down. The wily Anil too had however noted the physical and other charms of his customer. He had no intention to let the penniless Amar snatch this glittering prize out of his hands. He knew Shampoo and her frustrated fury. He conspired, laid a deadly trap and almost got away with his unsuspecting victim. Almost but not quite, for he bargained without a father's love and the heights of sacrifice love can reach.

Producer-Director Dalsukh M. Pancholi has brought to the screen a thrilling new kind of story which makes AASMAN one of the outstanding motion pictures of the decade. 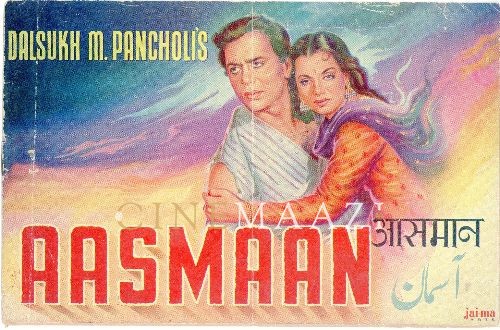