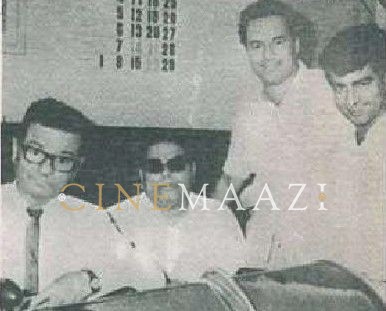 Legendary sound recordist Minoo Katrak, or fondly addressed as Minoo Baba, was born on 26 June 1906 in Bombay. He started his career in the film industry probably in 1933. He tried his hand at production but finally stuck to sound recording. He was one of the most prominent technicians of his time and a master in recording and re-recording songs and background music. His first project was Sant Tukaram (1936) but it is not known in which department Katrak worked.

Before becoming the chief sound recordist in Famous Studios in Tardeo, Minoo Katrak worked in films like Laxmi (1940), Vanmala (1941), Sharda (1942), Prestige or Pehle Aap (1944) and Kanoon (1943). After Famous Studios was established in 1946 in Tardeo, Minoo Katrak joined there and became the man behind some of the most unforgettable melodies of the Hindi screen. The studio was liked by many top musicians not only because the acoustics were way better than the makeshift spaces they used to record in till then, but also because it was air-conditioned.

A favourite of music directors Madan Mohan and Shankar-Jaikishan, it was under Katrak’s stewardship that Famous Studios reached a position of eminence in the film industry. With Raj Kapoor, Katrak developed a particularly fruitful relationship that extended until the early 1970s. This decade was also quite fruitful for him where he worked as song recordist in hits like Heer Ranjha (1970), Johny Mera Naam (1970), Aan Milo Sajna (1970), Safar (1970), Mera Gaon Mera Desh (1971), Reshma Aur Shera (1971), Amar Prem (1971), and Pakeezah (1971).

In an incredibly prolific career, Minoo Katrak worked in over 350 films as song recordist, sound recordist, and occasionally as a background music composer and a writer. It is no understatement to say that he was one of the founding pillars of the craft in the Hindi film industry.