On the night of 11th October 1943, the Japanese bombed Madras (India), causing commotion all over the city. The next morning, Rajan (Sivaji Ganesan), a radio engineer, scientist, and communications researcher, is found dead with his handgun by his side. His neighbor Chinnaiah Pillai had heard the gunshot and complained to the police. A local police inspector Naidu and a C.I.D. officer Sivanandan (‘Javert’  Seetharaman) investigate the case by questioning five characters: Rajan’s lover turned-wife Usha (Pandari Bai), Chinnaiah Pillai, Rajan’s brother Pattabi, Pattabi’s wife Hema, and dancer Ambujam (also Rajan’s mistress).

Each one recounts the murder from their point of view on who could have committed it, each pointing to a different suspect. Sivanandam then uses clues in the victim’s room, gets serendipitous leads, understands the characters’ persona, and uses this knowledge to identify the culprit.  The commonly used saying “Kolaiyum seival patthini” (a virtuous wife may even kill her husband) written on a poster gives Sivanandan the lead to trace the murderer.  The real culprit is Rajan’s wife Usha, who is a patriot.

The story in flashback goes like this:  Rajan wants to sell cheap radios invented by him to the poor, but could get no support from the Government of India or business people. On a business trip,  Rajan goes to Japan, where his invention is appreciated; he becomes their spy and wants to take revenge on his home nation, which did not recognize him. When  Usha comes to know this, she tries to reform him. However, Rajan refuses and tries to sell India’s military secrets (which he has collected) to Japan. Usha tries to stop him from doing so, but when Rajan refuses, she threatens to kill him to protect the country. In their scuffle holding a gun, Rajan gets killed. After confessing to Sivanandan that she has killed Rajan, Usha commits suicide.

This was the first Tamil film made with no songs. 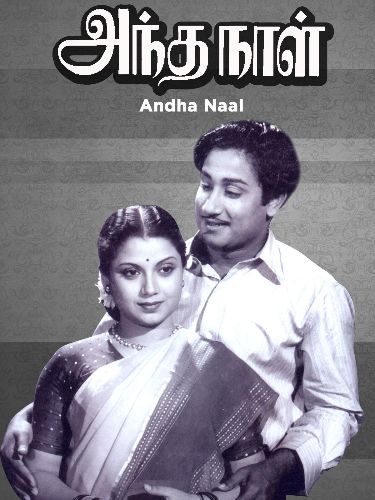 Avan Amaran alias He Is Immortal