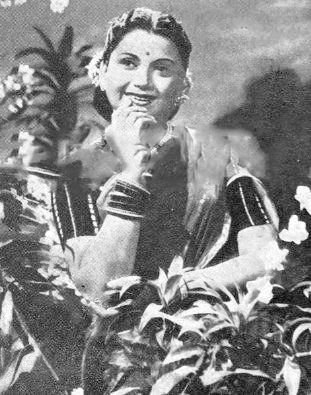 Rarely does a person get to romance and also mother the hero. Strangely, however, Pandari Bai, has this distinction of doing so. Not only was she the romantic interest and paired with such stalwarts of films as Dr Rajkumar, MGR and Sivaji Ganeshan, singing duets with them, but she had to don the role of being their dutiful and conscientious mother as well, including Rajesh Khanna, N T Rama Rao, as age caught up and roles as lead began to dry up with many young actresses coming into the arena.

It was to the fortune of Pandhari Bai that with a Harikatha exponent father, who also was a drawing master, and stage actor, the young woman took to performing Harikatha discourses at the tender age of ten. This, in turn, honed her skills to not only face the camera but also provide power packed performances when she was cast in the films she was signed up for.

She was born on 18th September, 1928, in Bhatkal, into an orthodox, Konkani Saraswat Brahmin household. Her father Ranga Rao was a painter and theatre artiste, proficient in Hari Kathas. When he tried to work in a school to supplement his income, he was cruelly mocked by students for his lack of English learning. He continued to practice Hari Kathas and also opened the Amba Prasaadika Nataka Mandali. He would perform Hari Kathas with his four sons. Pandari Bai was hs eldest daughter, and was named after the family deity. She learnt Hari Kathas from her father at a young age. Quick to spot her talent, he encouraged her to give a Hari Katha performance when she was only ten years old. She soon stopped her studies and took up Hari Kathas as a profession, performing stories of Sukanya and Purandara Dasu. She earned the sobriquet Keertana Kokila from the citizens of Mysore for her lively performances. When her brother set up Adarsha Nataka Company, he wanted Pandari Bai to be the heroine of his play. Despite their father's objections, she acted in the play and became an overnight success. Some of her notable plays were Gowtama Buddha, Madutana Maduve, Vikarama Sashikala among others. Even her father ultimately warmed up to the idea of her acting after seeing the adulation she received from her audiences. K Hirannaiah, who was making the film Vani (1943) at the time, saw her performance and decided to cast her as Chowdiah's sister Vani in the film. The film also marked Musuri Krishnamurthy's debut. The film took three years to be completed and was ultimately a box office failure. She received her next opportunity in M K Thyagaraja Bhagavatar's film Haridas (1944). Both this and Bhakta Gora Kumbhara (1947) failed to attract much attention. Later she got the opportunity to hone her Tamil skills when she was contracted to AVM for two years. After her contract ended she worked in films like Raja Vikramarka (1950) and Marmayogi (1951). She also received a role in the Hindi film Bahar (1951). Due to her proficiency in several languages like Kannada, Konkani, Tamil, Marathi, Hindi and some Telugu helped her dub in any language. Offers started flowing in for her after that.

One could safely say, the 50s, 60s and 70s, were indeed the Pandari Bai era, which saw her cast in several films including Dr Rajkumar’s debut Kannada film Gunasagari (1953), Bedara Kannappa (1954), Sivaji Ganesan’s Parasakthi (1952), Andha Naal (1954), Manohara (1954), Shiv Bhakta (1955), Chella Pillai (1955), and Vadina (1955), capturing audiences’ attention with her magnetic presence as also playing the part with all the sincerity at her command. Her performance in Kula Deivam (1956) which also featured her sister Mynavathi, earned her great acclaim. In Telugu cinema, she appeared in the role of a mother in several film, after appearing in C.I.D. (1965).

It is no wonder that she was hailed as Kannada cinema’s first successful heroine, who was honoured with Kalaimamani by the Tamil Nadu government in recognition of her sterling contribution to films in multiple languages.

With visionary directors who thought of the times, saw Pandari Bai establish herself as lead actress portraying women with a “progressive” image, bravely negotiating the feudal patriarchy setups in films such as Sant Sakhu (1955) and Rayara Sose (1957). In 1959, she appeared in Abba Aa Hudugi, (the title itself should indicate her empowered woman role) with her sister Mynavathi. The film is considered a landmark in Kannada cinema.

Pandari Bai, who enjoyed a long tenure in the film industry, and was looked upon both by the family and young audiences reverentially for the roles she played, went on to ensure a handsome 1,500 films in her kitty from languages like Tamil, Telugu, and Hindi besides Kannada, her mainstay, in the nearly half a century of active acting career.

Her sister Mynavathi also went on to become a successful actress. Pandari Bai's eldest brother's Jagannath settled down in North karnataka . He became proficient in making harmoniums. Her second brother Sadasiv settled down in Madras. He too earned fame for making harmoniums. Her third brother Vimalanand Das was the one who convinced her to perform on the stage for the first time in his dramas. He settled doown in Mysore and performed plays and Hari Kathas.Her fourth brother Prabhakar became a good singer and sang on the radio besides giving several stage recitals. Pandari Bai married P.H. Rama Rao.

With TV marking its own presence slowly upstaging films - once the sole medium of entertainment - saw the grand dame take to a couple of Kannada TV serials, Amma and Manethana (1998–2000), both produced by her sister Mynavathi's son's company Yantra Media.

Pandari Bai passed away on 29th January, 2003 in Chennai.