Samrat Ashoka (V. Nagaiah), the great emperor of the Magadha empire, has a  young queen Sishyaratchadhai (P. Kannamba), whom he married during a war,  impressed by her beauty and talent. His son Gunalan (MKT) wins a war and returns to the palace. He is welcomed by his new stepmother, who falls in love with him instantly. Gunalan is already married to Kanchanamalai (T.V. Kumudini).  The king, pleased with his achievements in the war, makes him the crown prince and the country celebrates. But a Buddhist monk Uba Guptar, who comes to the palace, forewarns Gunalan of the impending difficulties in his life. The next day,  with the help of the king, Sishyaratchadhai invites Gunalan to sing songs for her.  When the king goes along with the minister for an urgent meeting, she dances to Gunalan’s songs and tries to seduce him in the absence of the king. But treating her as his mother, he rejects her advances. She gets upset with his rejection and pleads with him to accept her as she is unable to forget him since the day she first saw him. However, Gunalan firmly declines her advances.

The king, who returns to the room, notices her pleading with Gunalan holding her hand and misunderstands that Gunalan is trying to seduce her. Angry and impulsive, he banishes Gunalan from the country. However, the minister, who knows Gunalan well, feels that something is fishy. However, Gunalan does not reveal what had happened as it would spoil his father’s reputation.  The minister advises Gunalan to live with Mahendran (M.G. Ramachandran) in  Thakshaseelai, a country under the control of the Magadha kingdom. Gunalan leaves his pregnant wife Kanchanamalai in the palace and lives with Mahendran.  Despite knowing what happened to Gunalan, Sishyaratchadhai still does not forget him; instead, she tries to get him back to the palace. She sends a letter to  Gunalan that Kanchanamalai is unwell and he should rush to the palace. By then,  Kanchanamalai, who comes to know the real plans of Sishyaratchadhai when she visits her, gets upset and leaves the palace in search of Gunalan. Gunalan reaches the palace at night and mistakes the lady sleeping in his room as Kanchanamalai, not knowing that she is Sishyaratchadhai, who once again tries to seduce him.  Gunalan gets upset, rejects her, and repeats that he treats her as his mother; he takes an oath never to see her again with his eyes in his lifetime and returns to Mahendran. An angry Sishya decides to take revenge on him. When a visiting Buddhist monk informs the king that Gunalan is innocent, he gets confused. Finally, he decides to bring him back and writes a letter to Mahendran. However, Sishya cunningly changes the letter and by using the King’s signature on a plain letter, writes to Mahendran that for committing the crime of trying to seduce his mother, Gunalan must lose his two eyes. Gunalan gets shocked by reading the letter and instead of  Mahendran, he himself blinds his eyes to follow the instructions given in his father’s letter.  The Buddhist monk treats him and gives him a  wooden stick for support. On the way, he meets his wife Kanchanamalai, who was in search of him;  both live together and beg for alms by singing.  Kanchana soon delivers a baby girl. However, they lose the child when they live in the open. Pining for his son, the king’s health deteriorates. Sishya now regrets her mistakes and tries to make amends;  she takes the king to Sorgapuri, the abode of Lord  Buddha. The king hears Uba Guptar singing on the road and sends his people to invite him. But they notice Gunalan and Kanchana singing on the road, and bring them to the king.  The king is unable to identify his son initially and asks him to sing a song. When Gunalan sings, the king identifies him as his son. He gets shocked when  Gunalan reveals that he was blinded at the king’s instruction. As proof, the minister brings the letter signed by the king. The king gets angry with Sishya for betraying him and indulging in these activities. By then, Sishya, who went out to bring Uba Guptar,  also arrives. When she overhears the king’s strong words against her, she commits suicide. Uba Guptar takes both the king and Gunalan before Lord Buddha.  Gunalan prays, Lord Buddha comes alive and restores  Gunalan’s eyesight. The father, son, and Kanchanamalai unite.

After delivering four consecutive hits, Ashok Kumar was MKT’s fifth film, which also succeeded at the box office due to the intrinsic strength of its script and melodious songs by MKT. M K Thyagaraja Bhagavathar was at the height of his glory at the time. His song in the film, all written by Sivan, has become part of the social history of Tamil Nadu, particularly Bhoomiyil manida jenmam (Life on this earth as humans). In a quaint way, this song featured in a Hollywood movie also, Elephant Walk (English, 1954), in which tea plantation workers in Sri Lanka sing it. Asok Kumar was one of the earliest films in which the song was pre-recorded. The practice of using popular tunes from Hindi films was just beginning. The tune of the song Pia milan ko jana, sung by Pankaj Mullick in Kapal Kundala (1939) was therefore used in this film.

This was the first film in which a song was recorded first (playback), then the shooting of the dance scene was done by playing the pre-recorded song and the artiste moving the lips in sync with the song. Till then, artistes had to sing and dance or act live, thus giving them difficulties. This new technique, which came in after much struggle, became a boon for all filmmakers and artists since then.

Ashok Kumar was released in Hindi simultaneously as Veer Kunal (1945).

A textile engineer-turned-filmmaker, Raja Chandrasekhar, as director of the film, gave it a vibrant quality by these camera movements and angles and made good use of close-ups dolly and crane shots. In a court dance sequence, the influence of Busby Berkley is evident. But the dominance of the spoken word continued (dialogue was by Ilangovan). There was also a comic sub-plot featuring N S Krishnan and T A Mathuram, the pair that strode the Tamil film scene for twenty-five years in comedy roles. 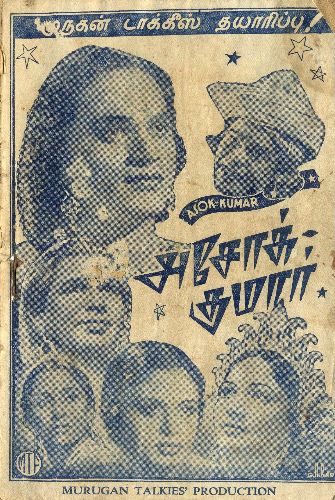 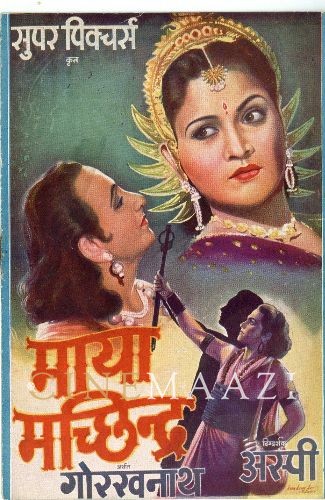