There are certain tribes in our country who are still continuing to dwell in the remote fastness of forests. They are called BANWASIS. They are as much entitled to civic rights as any other inhabitants of India. But they are being ignored, neglected and shunned. No one has ever thought of it that by taking them out of the abyss of ignominy and ignorance and by reinforcing and educating them, they could be turned into useful and worthy sons and daughters of our motherland. BANWASI is a tale of these folks.

MAYOOR, an educated youngman is deeply moved by the miserable plight of the BANWASIS and decides to work for their amelioration. It's an uphill task and Mayoor has to face insurmountable difficulties. Tatya, the cruel, greedy and unscrupulous money-lender of the village opresses BANWASIS beyond endurance. His profligate son RAJA - the forest contractor - is more vicious, villianous and tyrannical than the father, has evil designs on a pretty young Banwasi maiden, LADI. Ladi is about to fall a victim to Raja's licentiousness but luckily escapes her moral doom through the timely help of the daring Mayoor. Raja wreaks his revenge on both Ladi and Mayoor by having them hurled down a precipitous rock. Mayoor and Ladi however, have a miraculous escape and become devoted to each other. Mayoor dedicates his life to the uplift of Ladi's tribe.

ANKUSHA, a brave and young Banwasi is a thorn in the sight of Tatya, the tyrant. Tatya hatches plots and plans against Ankusha and eventually succeeds in having Ankusha jailed. Simultaneously Tatya's son, Raja starts persecuting Ankusha's father and gets the poor man tortured to death by his henchmen.

The innocent Ankusha is in anguish owing to the injustice meted out to him at the hands of the law. Escaping the prison, he reaches his village and finds that the last rites of his dead father are being performed. His anguish and anger know no bounds on hearing that his old father became a victim to the tyranny of Raja and pledges to take revenge on his father's murderer. The police, once again, are on his heels, but Ankusha manages to escape from their clutches and flees towards the jungle.

MAYOOR's father doesn't approve of the romance between his son and Ladi and compels Ladi and her father to quit village. Mayoor finds his separation from Ladi unbearable and in utter desolation of heart leaves his hearth and home for good.

In the wake of these happenings, a hitherto unheard of calamity befalls the Banwasis - a deadly FAMINE - manoeuvered by the evil mechanisation of Tatya and his clique.  While old men, women and children are dying fast of utter starvation, the Tatya granery is swelling beyond proportion by loot and pillage.

The sad news of the sorry plight of his famine-stricken people reaches Ankusha. Impelling him resolutely to avenge his father's death, he determines to lead his people in open revolt against the tyranny of the opressors. Ankusha joining his people leads them in an attack on the house of Tatya. Tatya's son Raja gets killedin teh affray by Ankusha and as ill-luck would have it, it's Mayoor who is arrested for the murder of Raja.

WILL Mayoor, the innocent, the selfless liberator of the down-trodden and the opressed be hanged for the guilt of others?

Will the vociferous SOCIETY let such a thing happen?

IS that the verdict of JUSTICE? 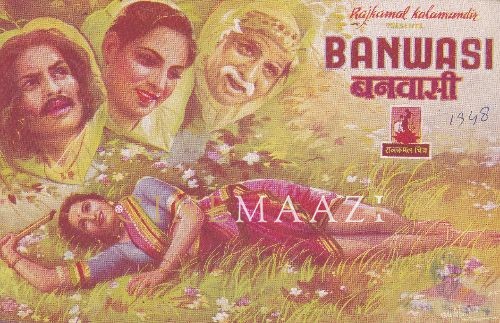