Loosely adapted from Shibram Chakroborty’s novel of the same title, Bari Theke Paliye follows the travails of Kanchan, a young boy from the village Kajoldighi. Kanchan is a sprightly, imaginative boy, attached to his mother and terrified of his authoritarian father. Kanchan’s father, who is the headmaster of a school, is a strict disciplinarian who does not believe in material luxuries. Defying his commands, Kanchan often gets into scrapes with other boys in the village. One day, he skips school and is told by their servant Nanda that his father is on the prowl. He decides to run away to Calcutta, and return only when he has earned enough money to buy his mother the luxuries his father denies her.
In Calcutta, Kanchan is fascinated by the city—its teeming spaces and monumental buildings. An old man named Haridas saves him from being crushed by a car, and takes him under his wing. It is soon revealed that Haridas is a refugee of the Partition, an erstwhile schoolteacher who dons a wig and beard to sell fried food to young children. Though Kanchan distrusts him at first, thinking him to be a “chheledhora” (child abductor), he grows to like him. In the slum Haridas inhabits, Kanchan encounters a magician who uses children as his assistants, and asks him if he can join him. The man tells him his name is Ishu Bhelkiwala, and that he should ask after him in the nearby Iduria Patti.
A hungry Kanchan wanders into a hotel where he eats his fill. As he eats, a group of young men discuss contemporary politics and the mythical Calcutta culture. One of them relates how he had run away from home as a child, and had been enchanted by the rhythm and the magic of the city. Now, after Partition, the city seems strangely out of joint. Kanchan is thrown out of the hotel when the proprietor realizes he cannot pay for his meal. Haridas wanders around looking for Kanchan as he traipses around the city, meeting a Baul who sings of the marvels of Calcutta. When he meets Kanchan, the two run first into a protest march and then into a wedding procession, and they are separated again.
At the wedding, Kanchan spots a young girl of his own age, and takes a liking to her. He asks another boy what her name is, and soon, three children surround him, teasing him for his lack of fluency in English. The boy’s elder brother, a schoolteacher, tests him as well. Kanchan feels lonely and alienated from the rest. However, he forgets his discomfort when the lavish dinner is served. Lulled by music, he goes to sleep. He dreams of rowing Mini across a river and bringing her home to his loving mother. His blissful dream is marred by his father’s looming presence, and he wakes up missing home. The next morning, he is aghast to see a starving family scrounging through the leftovers of the wedding for sustenance. As he sets off again, he meets a boy who draws images of gods in chalk for a living. He finds out that the boy is part of a large group of children whom a man uses to beg for money. In a scuffle with the man, Kanchan saves the boy and they run away together. Unfortunately, his new friend is caught again, and Kanchan escapes by the skin of his teeth.
He chances upon a kindly old woman who takes him home and feeds him. She tells him that she is looking for her long-lost son, and her suffering reminds him again of his mother. Wandering through the streets, Kanchan dreams of going home dressed as a postman, with cosmetics and jewellery for his mother. He is shaken out of his reverie by Mini, who takes him into her house. Mini’s mother Mala is a lonely, ill woman, longing for her home in her village. She senses Kanchan’s own origins, and is immediately drawn to him. As Kanchan stays on in their house for dinner, he also meets Mini’s father. Kanchan is awed by the love and luxury Mini is ensconced in, and when a song on the radio reminds him of his mother, he breaks down and leaves. The following day, Kanchan sees the old woman he met being attacked by a mob for having taken another child home. He follows the crowd and claims to be her son, but to no avail. When he runs into Haridas again, he is disillusioned with the city, and asks him why it holds so much pain and suffering.
When both Mini and Haridas tell Kanchan to return home, he argues with them and runs away. He sees the darker side of the city as his shoes are stolen and he starves for a day. A kind man tells him that the city is a site of struggle, no place for a child, and exhorts him to go home. Kanchan returns to Mini’s house, and he is shocked to find that Mala has died. Haridas tells him of an announcement in the newspaper pleading for Kanchan to return to his village, and gives him his sack and beard to take back as his “earnings” from Calcutta.
Kanchan finally goes back home. He has a joyful reunion with his mother, and reconciles with his estranged father. The film ends with Kanchan wearing Haridas’ beard, rowing across the river. 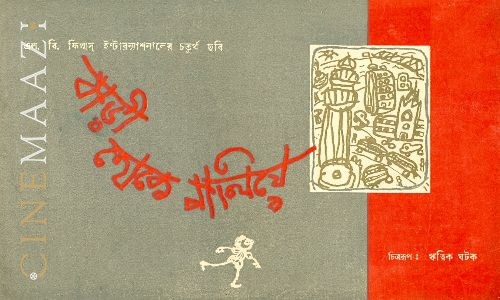