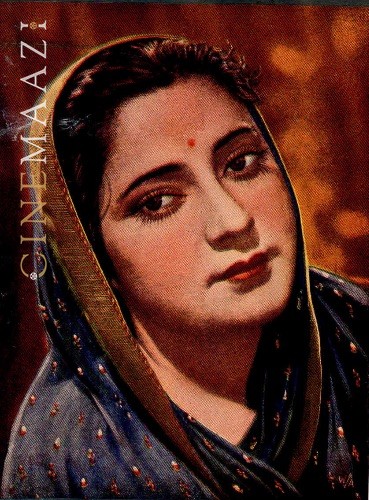 Prolific actress and singer from the silent and early talkie years of cinema, Padma Devi is known for Bengali and Hindi films such as Kisan Kanya (1937), Bou Thakuranir Haat (1953), Jalsaghar (1958), and Bari Theke Paliye (1958). Starting off as an extra with Kohinoor Studios during the silent film era, she was one of the earliest action heroines of the screen. Making an impact in Sea Goddess/ Dariai Devangana (1931), she was often paired with the stunt actor Boman Shroff in several successful stunt films such as J B H Wadia’s The Amazon (1933). While her early films include Karna (1928), Vanarsena (1932), Lal-e-Yaman (1933), and Bala Joban (1934), she worked through the subsequent decades, later playing a host of character roles. She acted in more than one hundred films in the course of her career.

Born Nilima in 1917 in Bengal, her family hailed from Madaripur. Gravitating towards the new entertainment medium of films, she started her career with the lead role in the silent film Sea Goddess also known as Dariai Devangana (1931). Directed by Dhirubhai Desai and produced by Saroj Film Company, she starred alongside Chandrarao and Zebunnisa in this costume drama.

She had her first big break in films through well-known filmmaker Jamshed Boman Homi Wadia, better known as J B H Wadia. In his unpublished autobiography, the founder of Wadia Movietone Studio wrote that he made his last silent thriller - The Amazon or Dilruba Daku (1933) with Padma Devi in the stellar role. It featured her as the masked woman and saviour of the people, which was quite an anomaly in those times. While he did avail of a duplicate in female garb to enact her stunts, she herself had become adept at fight sequences. Her youth and beauty further added glamour to the film. The box office success of this actioner would induce Wadia to sign on Fearless Nadia in his future talkies films, starting with the stunt film Hunterwali (1935), which created a sensation.

Wadia’s Bag-e-Misar (1934) saw her feature alongside Sayani Atish, Feroze Dastur and Jamuna, while she also starred in the Oriental fantasy derived from classic Parsee theatre – Lal-e-Yaman. The film revolved around the story of the heir to the Yemeni throne, Prince Parviz, who is falsely imprisoned by his stepmother who claims power. Parviz receives a magic dagger from a mystic sufi fakir to liberate himself and his people. The dagger makes him invisible. He kills the ape-man and the genie, rescues the captive Princess Parizad and overwhelms the soldiers sent to recapture him. The king learns the truth and repents. She essayed the role of the princess in the film alongside a cast comprising Jal Khambatta, Karimja, Feroze Dastur and others.

Padma Devi has the distinction of starring in Kisan Kanya (1937), the first indigenously made colour film. Directed by Moti Gidwani and produced by Ardeshir Irani of Imperial Pictures, it was based on a novel by Saadat Hassan Manto and focussed on the plight of poor farmers.

She won appreciation for her performances that followed. She featured in the Rafiq Ghaznavi-starrer Chalti Duniya (1940), directed by Gunjal and B Marzban, also starring in director Ram Daryani’s Hindustan Hamara (1940) alongside Jamuna and Nandrekar, and several more films.

By the mid-1950s, she was largely seen in Bengali cinema in character roles. While she played the mother of Ramola in Sharey Chuattar (1953), she was Ranima in Bou Thakuranir Haath (1953). She played mother or aunt roles in films like Sadanander Mela (1954), Prashna (1955), Asha (1956), Andhare Alo (1957), and Bari Theke Paliye (1958). She essayed Mahamaya, Roy’s wife in Jalsaghar (The Music Room, 1958). The film depicts the last days of a decadent zamindar (landlord) in Bengal, and his efforts to uphold his family prestige even when faced with economic adversity.