Chintamani is based on the legendary story of a Sanskrit poet and devotee of Lord  Krishna named Bilwamangal.  Bilwamangal, (M.K. Thyagaraja Bhagavathar) a Sanskrit scholar residing in  Varanasi, with his wife Sushilai (Ranganayagi), gets infatuated towards a courtesan  Chintamani (K. Aswathamma), due to the influence of his friend Manoharan  (Y.V. Rao). As a result, he deserts his wife and father. Depressed with the son’s behavior, his father dies, handing over all his wealth to Sushilai. However, she surrenders to Bilwamangal and seeks only his love. But he refuses and goes after Chintamani. When lightning strikes the city, he gets worried about  Chintamani and tries to leave Sushilai.  When Sushilai pleads with him not to go out leaving her alone, he refuses and states that for him Chintamani is more important. Unable to accept the rejection,  Sushilai jumps into the overflowing river and dies. Bilwamangal tries to cross the river to meet Chintamani but as no boat is available, he holds on to a floating dead body, crosses the river and reaches Chintamani’s home unable to realize that he was holding on to his dead wife’s body for flotation. When he reaches  Chintamani’s house and knocks, no one responds. Hence, he scales the wall using a rope, which is actually a snake. When he enters the house, Chintamani notices blood on his body and tries to find the reason. They first notice the snake which he used as a rope and then visit the river bed and see that it was Sushilai’s body he had used, to cross the river. He gets upset and blames himself for her death.  Chintamani, an ardent devotee of Lord Krishna (Serugalathur Sama), spends most of her time singing bhajans in praise of Lord Krishna. She makes Bilwamangal realize his mistakes; both convert into devotees of Lord Krishna and sing bhajans.

When Lord Krishna and his wife Radhai come to the world in disguise,  Bilwamangal does not recognize them; instead, he lusts for Radhai. To make him realize his mistake, Lord Krishna in disguise offers him Radhai. When he attempts to touch her, he notices skeletons and Lord Krishna in her. He gets shocked and realizes his mistake in desiring a divine woman. Since his eyes are the cause for his desire, he inflicts injuries on both his eyes as a punishment and becomes blind. However, Lord Krishna and Radhai appear before him and restore his vision. Soon,  Bilwamangal and Chintamani surrender their lives and merge with Lord Krishna.

Chintamani was the first Tamil film to run for a year in a single theatre. A silent film was made based on the play in the 20s.

Madras Film Ballot selected this as the best film for 1937 and  K. Aswathamma was recognized as the best heroine of 1937.  Royal Talkies received the Gold Cup for this movie.

The gramophone records with Aswathamma’s  songs were released first with the songs,  ‘Krishna Krishna…’ and ‘Eena jenmam eduthen  en ayyane…’ 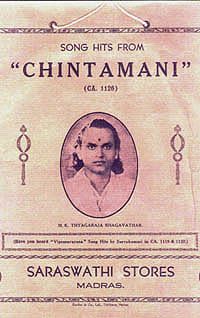 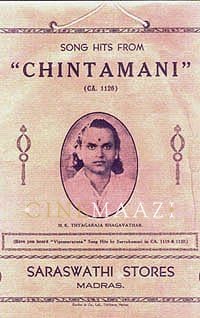