Dinanath is having three children namely Radha, Ajay and Amar. To maintain his family Dinanath commits petty thefts with two of his is after them, Dinanath, Dhanraj, Jagraj decide to hide the bag of stolen cash in Dinanath's house, Radha does not like it. She tells that thief's son will always become thief only. Dinanath realises his mistake and promises Radha and his sons that he will return the stolen money to police. Dhanraj and Jagraj, who overhear their conversation, forcibly try to take stolen money from him. Radha picks up the bag and locks herself in a room. As the quarrel picks up Dinanath sends his sons to police. However in the fight the house is set on fire by Dhanraj and Jagraj. Dinanath thinks that his daughter has been burnt alive but she had already escaped from the window. Dhanraj and Jagraj kill and throw Dinanath in an isolated place and when Ajay and Amar come with police, they presume that their father and sister is killed and burnt in the fire by Dhanraj and Jagraj.
Radha, who was lying unconscious on the roads, is picked up by one Mr. Sinha, who was travelling by car with his young son and second wife and the daughter and Mama. Wife Shanti and Mama are very greedy persons. They did not like Mr. Sinha to give shelter to Radha, but Mr. Sinha and his young son pratap took tough stand. As a result Shanti and Mama had to reluctantly relent.
Ajay and Amar, totally destrajed of their future, leave the town and decide to go to city in search of their arch enemies I.E.; Dhanraj and Jagraj. The film dissolves into time-lapse and Ajay and Amar are now grown up handsome boys. Ajay educates his brother upto law graduation and they now have only one purpose to search out their enemy. They set their target of looting and robbing the places of illegal business as well picking up valuable properties criminally but within the framework of law. In short they become 'Conmen'. This starts posing threat to the business empires of Dhanraj and Jagraj. Dhanraj and Jagraj also try to hatch a plan to come under the shelter of police. Dhanraj and Jagraj and prakash (Jagraj's son), who traps pratap Sinha's younger sister into his love affair, go to pratap Sinha's home with a proposal of engagement & Prakash Uma. But Radha, who recognises the killers of her father, opposes the proposal. Shantidevi and Mama and Uma are furious and angry on Radha but they are helpless because Inspector pratap Sinha blindly supports the stands the stands of his wife Radha. Shanti, Uma and Radha do not see eye to eye in the house.
At this point of story we find that Dinanath, who was presumed to have been dead, is alive and is under the shelter of Marshall in Hongkong. Marshal, known for crimes, has developed a chemical formula, which, if drunk by a man like drink, converts into human bomb. He has to recover money from Dhanraj and Jagraj for the sale of this formula and sends Dinanath to them in disguise of Marshall. Dhanraj and Jagraj who want to cheat Marshall, they go to hotel to steal the formula but surprisingly reveal that Dinanath was not dead and the person now came in guise of Marshall is none other than Dinanath. As he tells there that he has Dhanraj's daughter in possession, whom they want to shoot Dinanath, he had kidnapped long ago.
Ajay and Amar, on the other hand, are now successful in looting legal ways, through their legal connings, and time and again they come in the eyes of A.C.P. Pratap Sinha, but cannot arrest them, due to the intelligent maneuvering of law poing.
There is short story of love and romance of Ajay and Amar with Kiran and Asha. Kiran is the caberet dancer in the villains' hotel, while Asha is the daughter of Dhanraj.
Dhanraj and Jagraj, frustrated over their failure to trap policeman pratap sinha and also because of Radha's often interferences, decides to kidnap and finish Radha and pratap Sinha. They entrust the job to Prakash. Prakash, while kidnapping Radha, rapes her. Ajay who sees the entire episode, saves Radha and beats Prakash mercilessly Villains use the episode and leave certain clues against Ajay who is then arrested on the charge of Prakash's murder. Ajay, though arrested by police on the charge of murder, does not tell the truth only to save the grace of Radha. Amar then adopts his way and means and discovers that charge of murder on his brother is false and gets his brother released form the police. A.C.P. Pratap Sinha also has realised by then that though Ajay are criminals but their war is against the real criminals. On the other side, Amar and Ajay declare their war against Dhanraj and Jagraj, who get support from police. In the process, they discover that their father and sister are alive. They meet happily is the final stage of story. 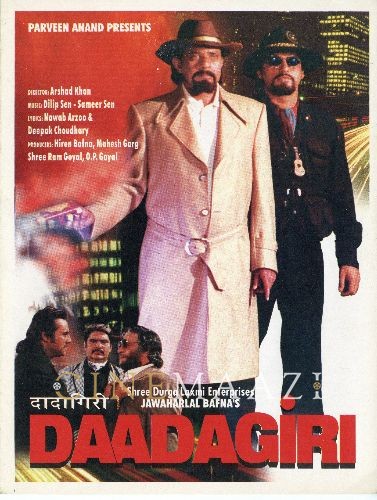