This film, made at the height of his popularity, can be considered a good example of an MGR film. Thangam, a truck driver played by MGR, has his own driving ethics —he drives carefully, follows the rules strictly and is concerned about the safety of pedestrians. His blind sister, Sumathi, is raped by his friend, Murthy, under the influence of liquor, and Thangam vows revenge. When Sumathi tries to kill herself, she is saved by an old lady. The old woman extracts a promise from a grateful Thangam that he will find her wastrel son and make him mend his ways. Thangam learns that this son is none other than Murthy. He locates Murthy, who is repentant, and gets him married to Sumathi. Thangam falls in love with a police officer's daughter, Kala, whom he saves from the hands of some goons. He later busts a robber gang and marries Kala.

This film was made when M G Ramachandran was a member of the Legislature of Tamil Nadu and deputy chairman of Small Savings. In the opening scene, MGR plays himself at a Small Savings function. Thangam meanwhile is in the audience and opens a savings bank account. He refers to MGR as vathiyar (teacher), the honorific by which he was known to his innumerable fans. C N Annadurai, former chief minister of Tamil Nadu, represented in the film through a look-alike, makes a speech and presents a cheque to Thangam, a prize winner in the state-run lottery scheme.

All the characteristics of an MGR film can be seen in Engal Thangam. Thangam fights, sings, cares for the poor and preaches against smoking and drinking, vices that MGR shunned in his private life. The colours of the DMK party, red and black are frequently featured in the clothes the hero wears. There is a humorous sequence in which Thangam, dressed as a traditional religious minstrel, complete with a tuft, sacred thread, and forehead marks, conducts a musical discourse (kalakshepam) on man's first trip to the moon. In another scene, he leans on a pole, with a bamboo stick on his shoulders and a shot of his shadow appears like the crucifixion. He is also featured in a song that says that he has risen from the dead, a reference to a real-life attempt on MGR's life in 1967. 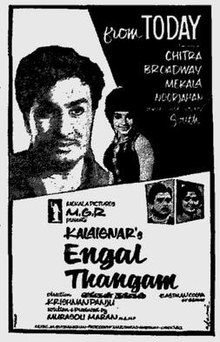