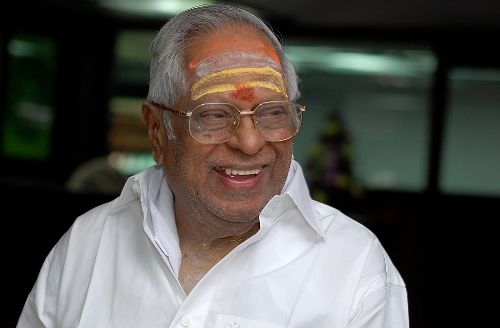 MS Viswanathan dominated the south Indian film music scene from the 1950s to the 1970s.Starting his musical career as a chorus singer in KV Mahadevan’s troupe, Viswanathan went on to become one of the most sought after music directors in the south of the country. He later came to be popularly known as Mellisai Mannar (King of Light Music).

Born to M Subramanian, an employee of the Public Works Department, and Narayani Ammain Palakkad district in 1928, MS Viswanathan had a gift from music even as a child. He lost his father when he was four years old and was brought up under the guidance of his grandfather Krishnan Nair. His family moved to Kannur when his grandfather was transferred.

As a young boy, Viswanathan showed more interest in music than in studies. He learnt the nuances of music under the tutelage of NeelakantaBhagavathar for four years. He held his arangettam at Kannur Town Hall. Before Viswanathan made his mark as a music composer, he also acted in a few stage dramas.

Anbe Vaa (1966) was MSV's first independent movie as music director. Previously, he collaborated with TK Ramamoorthy. Viswanathan’s early partnership with T K Ramamoorthy led to the introduction of a change in the orchestration of songs in Tamil films, making good use of the guitar and drums and adding a touch of Western music. The Viswanathan-Ramamoorthy combination, along with lyricist Kannadasan and singers T M Soundararajan and P Susheela, had brought out hundreds of superb songs that changed the course of Tamil film music. The duo split during the mid-sixties, after which MSV continued to score music for films in Tamil and other languages with great success.

Viswanathan’s partner Ramamoorthy was a violinist associated with the movies produced by Jupiter Pictures. Ramamoorthy's father also played the violin for movies during his career. Panam (1952), produced by Madras Pictures was Viswanathan-Ramamoorthy's first musical venture. Till 1965 the Viswanathan-Ramamoorthy team worked for nearly 86 Tamil movies. MSV also worked independently as a music director for about 420 Tamil movies. Over the course of his career, he even worked with the legendary Ilayaraja in five Tamil language movies. He also collaborated with other music directors of his time, including CR Subburaman (Marumakal, 1953 and Kaveri, 1955), MS Rajamoni (Jenova,1953), T A Kalyanam (Sorgavasal, 1954).

After a long gap, the MSV-Ramamoorthy joined again for movies such as Engirintho Vanthal (1995) produced by VS R Pictures and Ilakkiyacholai (1995). MSV came to Malayalam cinema through the 1953 film Jenova. His debut song in Malayalam was Idiappam sung by Jamuna Rani. Lilly was MSV-Ramamoorthy's gift to Malayalam cinema. MSV went on to compose music for several films like Lankadahanam (1971), Panitheeratha Veedu (1973), Chandrakantham (1974), Dharmakshethre Kurukshethre (1975) and Yakshaganam (1976). In total, Viswanathan composed the music for around 70 Malayalam movies.