Dayaparar (V. Nagaiah) is a widower whose only son Sundar (Sivaji Ganesan)  studies in a college at Trichy. Sundar is a tenant in a house in which Sumathi  (Padmini) lives with her father. They both start liking each other and Sumathi’s father agrees to their marriage.  Sumathi’s elder brother Doctor Gopu (S.V. Sahasranamam) lives in Bangalore and is addicted to racing. Using this situation, his friend Murthy (S.A. Ashokan)  tries to befriend Gopu’s wife Nalina (S. Varalakshmi) but she rejects his advances.  Kandasamy (‘Friend’ Ramasamy) working with Doctor Gopu notices the happenings in the family and feels bad.

Gopu, in order to settle a loan, borrows money from Murthy after signing a  mortgage letter. Kandasamy takes some amount from that to clear all family dues and Gopu dismisses him for that. Murthy comes home when Nalina is alone and tries to molest her but Kandasamy saves her. Gopu who arrives there realizes his mistake and unites with Nalina and takes Kandasamy back in the job.  After the exams, Sundar leaves to Chennai to get his father’s concurrence to marry Sumathi. After a few weeks, he writes to Sumathi that he will be coming in a week to finalize the marriage.

Meanwhile, Sundar gets a letter from the Government providing him a two-year scholarship for higher studies in  America as a reward for securing the highest mark in the State. Since it’s a rare opportunity, his father consents. Sundar meets Sumathi and her father and takes their consent too and travels to America.  Meanwhile, Gopu is harassed by the lenders. Unable to pay back, Gopu leaves home after writing a note to Nalina. Murthy takes possession of Gopu’s house in lieu of his dues. Nalina comes to stay with Sumathi. The family struggles to manage within their limited money to settle Gopu’s loans.

Meanwhile, the flight in which Sundar traveled crashes, and newspaper reports that everyone on board died. Sumathi and her father are shocked. Dayaparar sells off his property and moves from Chennai to  Trichy as he is unable to stay there anymore.  However, Sundar survives the crash and only loses his eyesight. He is given medical attention by a tribal family in a forest area.

Dayaparar’s friend  (M.R. Santhanam)  advises him to remarry to get over his sorrows as he is alone after the death of his son, to take care of his health.  He meets Sumathi’s father and seeks her hand for Dayaparar and mentions that all his property will be left for Sumathi after he dies as he is alone. Sumathi agrees to the marriage to support her family and settle Gopu’s loans, though both her father and Nalina do not accept her plan. On the wedding day, Sumathi’s father passes away, unable to see his daughter marrying an old man.

That night, Dayaparar realizes that his son Sundar and Sumathi were lovers earlier. Broken-hearted, he leaves home writing a letter to  Sumathi in which he leaves all his wealth to her and gives her the freedom to choose a life of her own (to remarry).  Dayaparar wanders around visiting temples and holy places and in one of the temples he sees Sundar begging – being blind he did not want to be a burden to his father and hence was living alone. Father and son rejoin.  Gopu returns to Sumathi’s house as a reformed man and starts his medical practice again. He dreams of his sister re-marrying but Sumathi still thinks of Dayaparar as her husband.  Sundar requests his father to take him to Sumathi’s house in Trichy. Dayaparar takes him to Trichy and sends him to her house alone and stays back to avoid confusion.

Sundar meets and proposes to Sumathi and she informs that she is already married and agrees to be just his friend. They meet often and Sundar suggests remarrying as her husband has moved away. But Sumathi rejects saying she is still the wife of a man living somewhere. Sundar informs this to his father. Dayaparar feels guilty and in order to unite them sends a false letter to her stating that Dayaparar had died in an accident. Now Sumathi starts living like a widow.  On a rainy night, Sundar meets Sumathi at her home, holds her hand, and tries to get her consent to marry him, now that her husband has passed away. Sumathi gets angry and slaps him for trying to take advantage of her situation and makes it clear that in her life there is a place only for  Dayaparar. Sundar is shocked at her rejection.

Gopu comes to know about Sundar’s situation and operates on Sundar’s eyes and he gets back his eyesight. Gopu takes Sundar to his house to unite him with  Sumathi.  Reaching there, Sundar is shocked to see the portrait of his father with a garland and realizes that Sumathi has actually married his father and is now his stepmother. He feels guilty and rushes to apologize to his father but it was too late as Dayaparar has passed away. Sumathi and her family are shocked to know that  Sundar’s father was Dayaparar.  Dayaparar had left a letter to  Sumathi in which he apologizes for marrying her and asks  Sumathi to live on her own terms. Sumathi reconciles herself to live as a mother to  Sundar than remarrying and he also appreciates that and calls her as his mother. Sundar goes abroad to continue his studies with his stepmother’s blessings. 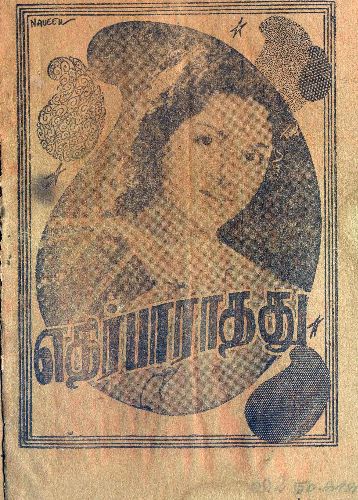