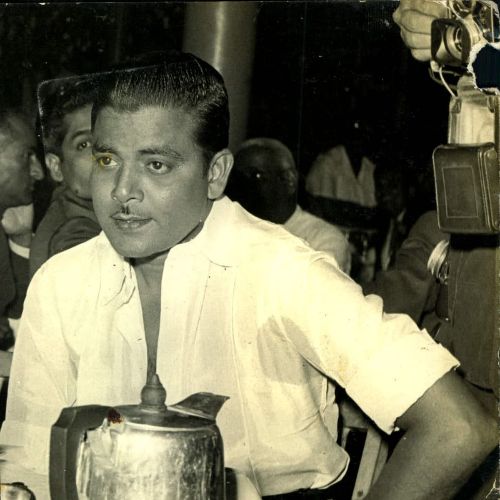 Showing remarkable dexterity across genres, C V Sridhar was an immensely successful director in Tamil, Telugu and Hindi cinemas. Eschewing the more traditional dialogue style, he ensured that is films had breezy and accessible lines. He also favoured location shooting over the more conventional studio sites. Specialising in romances, he wanted to utilise the visual aspect of cinema more, rather than solely relying on dialogues.

Born on 22 July, 1933 in Chitthamur, he showed a penchant for the dramatics from an early age. While studying in St. Joseph's Higher Secondary School he started writing plays. It was the play Rathapasam which first gained him fame, earning the praise of T K Shanmugam. The story for the play was originally written for a film for AVM, but it was rejected by P Neelakantan. This play became the key that opened the door to the film industry for him, when it was adapted by Jupiter-Avvai Productions into Ratha Paasam (1954).

More success followed as he scripted the superhits Edhir Paradathu (1954) and Amara Deeepam (1956). He also wrote for films like Maaman Magal (1955), Mathar Kula Manikkam (1956), Yaar Paiyyan (1957) and Uthama Puthiran (1958). While working as a writer, Sridhar enriched himself with knowledge about filmmaking by reading books from the library of T R Sundaram.

Following his success as a writer, he got the chance to direct a film. He joined hands with S Krishnamurthy and T Govindarajan from Venus Pictures to produce the film. The result was the blockbuster Kalyana Parisu (1959). This also satrted the trend of love triangles in Sridhar's films. Even the comedy sequences from the film became so popular that they were sold as audio cassettes. It was considered the breakthrough film for B Saroja Devi, the composer A M Rajah and the singer P Susheela. The film's success helped him launch his own production company Chitralaya. The first film to be made under the banner was Then Nilavu (1961), which was extensively shot in Kashmir. He also made his Hindi film debut with Nazrana (1961) which was the remake of Kalyana Parisu. Though not as big a success in the box office as the original, it did win him a Filmfare Award for Best Story. Another major film Nenjil Ore Alayam (1962) was shot in a studio in an astonishing 25 days and also won the National Award for Best Film in Tamil. It was remade in Hindi as Dil Ek Mandir (1963) and in Telugu as Manase Mandiram (1966). It's music (by A M Rajah) became very popular among the Tamil diasporic population. The romantic comedy Kadhalikka Neramillai (1964) was also a big success and was the first Tamil film to be shot in Eastmancolor. The film also had successful remakes in Telugu (Preminchi Choodu, 1965) and in Hindi (Pyar Kiye Jaa, 1966). Pyar Kiye Jaa has one of Mehmood's best remembered performances. The film also enjoyed remakes in Kannada and Marathi.

Though he worked with major stars like Sivaji Ganesan and MGR, he also gave opportunities to new faces. Vennira Aadai (1965) was Jayalalitha's debut. He also played a major role in the careers of Ravichandran, Muthuraman and Kanchana. Some of his other notable films include Sivadha Mann (1969), Avalukendru Oru Manam (1972), Urimai Kural (1974), Ilamai Unchaladugirathu (1978), Azhage Unnai Aarathikkiren (1979), Prema Sangamam (1984) and Yaro Ezhuthia Kavithai (1986). His last film was Thanthu Vitten Ennai (1991).

He was awarded the Kalaimamani Award and the Arignar Anna Award. Very few directors displayed the same mastery with love triangles as he did. The music of his films, by Viswanathan-Ramamurthy, A M Rajah and later Ilaiyaraaja, and songs by Kannadasan, always proved to be a huge success.