India has always been a peace loving country. It is an unique amalgamation of different religions, languages and castes. But today, the unity of the country is in danger. A few opportunistic politicians have been misleading the simple people of India in the name of religion, language, caste and provincialism. The country's youth are being misguided. Those who are supposed to build the country, are taught to destroy it. Today, the country is aflame in the fire of riots in the name of religion, language, caste, etc.
The story of this film is not the story of a particular province or state but the story of India today. Only the State of Goa is chosen as the background, as a cell, symbolic of India. Goa has been gradually progressing, peacefully, keeping pace with the country's development. Petty and opportunistic politicians in Goa, realising the game being played on the National front, got busy creating a language issue over Konkani and Marathi which further escalated into religious issues which shattered the peace, "Susagado" of the Goan people.
Shashank Kalkear (Mohan Kothiwan) and M.L.A. of the ruling party, who professes to be a well-wisher of the Marathi speaking, is actually dreaming of becoming the Chief Minister of the State.
There is another opportunistic, so-called leader of the Christians, Dennis Pereira (Ravindra Mahajan). Kalekar is happy creating riots, as these riots and disturbances will cast reflection on the ability of the present Chief Minister in the eyes of High Command and his path to the Chief Ministership will become easier. The echo of the riots distrubs the peaceful state of Goa. Now, these politicians turn their eyes towards the youth of the State because they know that whoever controls the youth, will have the control over the Chair. It is also important to control the college unions. Sangeeta (Juhi Chawla) the daughter of Kalekar, studies in the same college where Peter Samuel (Binju Ali) studies. One is a Hindu and the other a Christian, yet both are madly in love with each other. Slim (Zutshi) and Fauzia (Bindu Kamat) are also studying in the same college and they too have a soft corner for each other. And to cheer up these loving couple, there are the twins, (Amin-Karim) Luv-Kush. They love each other very much and are great friends. This garden of flowers of different religions, castes, creeds blossoms day by day. Meanshile, another new flower blossoms. He is Sanjeev Kamat (Kumar Gaurav). He is a loner and a simple youth who becomes a friend of this group. The guide, friend and a philosopher, who is nurturing this garden of love and friendship, is none other than Father Mario (Tinu Anand). There is a thorn, Saby (Ashutosh Gowariker), who supplies drugs to the college students. He is a terror in the college and through him, Pereira controls the activities of the college union. This worries Shahank Kalekar.
Police Inspector Deepak Bandodkar (Joy Augustine) has been after Saby for quite some time. One day, when he is about to arrest Saby he is murdered by Saby and his men. Sanjeev Kamat knows the killers, reports it to the police and Saby is arrested. Pereira has enough pull to get Saby released. Now Saby wants to take revenge from Sanjeev but he misjudges the strength of this simple youth, who with one single blow flattens Saby. The students all flock around Sanjeev and make him their new leader. The union elections are nearing. Everyone wants Sanjeev to stand against Saby. Periera gets worried, but Shashank Kalekar is happy. As Sanjeev is a Marathi.................. game of divide and rule. There is a disagreement between Peter and Sanjeev. Sanjeev refused to fight the elections. Pareira is happy. Nobody can defeat Saby. Shashank Kalekar is worried, but Father Mario, brings about a reconciliation between Sanjeev and Peter. Ultimately, Sanjeev wins the elections. Pereira is worried as the college has gone out of his hands. It will not only affect his business of drugs but also his political strategy. Frustrated, Pereira, being a Christian himself, gets Father Mario killed to avenge the defeat of Saby and to create misunderstanding among the Christians against the Marathi speaking people. He blames them for the murder of Father Marco. Again riots erupt. Kalekar sees the Chief Minister's chair coming closer to him, but there is one obstacle on his way to Chief Minister's chair. His daughter Sangeeta is in love with a Christian boy, Peter and wants to marry him. If they marry, it is likely then that the Marathi leaders' followers may go against him. Peter must be removed. To win over Sanjeev, he offers the hand of his daughter to him.
Pereira is busy in his manouverings. Kalekar is planning to finish Peter. Meanwhile Sanjeev realises that he is being used as the pawn in the game of these dirty politicians and Kalekar and Pereira are responsible for all the riots and disturbances in the State. They are the persons who are misleading the people. He vows to expose them to the people. Pereira and Kalekar join hands. Their sole intention was personal rivalry, but to create chaos and disturbances in the State. Sanjeev could new become an obstacle. He should also be removed. The question is whether they are successful in their dirty politics? Whether Peter and Sangeeta unite together? Whether Sanjeev was able to expose the dirty games of the politicians? We can only say that ultimately there is a big explosion, the echo of which will reverberate over the country for years to come. 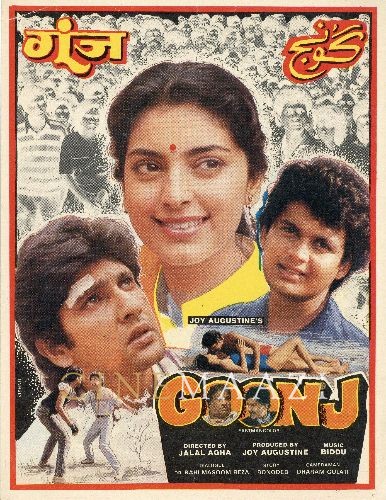