‘Lovely to look at and an instinctive actress, she is likeable as ever’—this description by film critic Khalid Mohammed is an example of the standard praise Juhi Chawla regularly won in the course of her career studded with commercial and critical successes. Admired for her ‘unfailing sense of humour’ and ‘comic timing which few can match’, and adored for her lively screen presence, Juhi Chawla was one of the most popular Hindi film actresses from the late 80s until the early 2000s. Actress, film producer and entrepreneur, she has also acted in Kannada, Tamil, Telugu and Bengali films. Selected winner of the 1984 Miss India beauty pageant, she went on to enter the film industry, debuting with Sultanat (1986). However, it was the tragic romance Qayamat Se Qayamat Tak (1988) opposite Aamir Khan that resoundingly established her as a star, also bagging her the Filmfare Award for Best Female Debut. She enjoyed several commercial successes such as Lootere (1993), Aaina (1993), Darr (1993), Hum Hain Rahi Pyar Ke (1993) which also won her the Filmfare Award for Best Actress, Deewana Mastana (1997), Yes Boss (1997) and Ishq (1997). The new millennium saw her exploring fresh screen space as she worked with independent filmmakers in offbeat films, winning praise for her performances in Jhankaar Beats (2003), 3 Deewarein (2003), My Brother Nikhil (2005), I Am (2011) and Gulaab Gang (2014). She also featured in Punjabi films such as Shaheed Udham Singh (2000), Des Hoyaa Pardes (2004), Waris Shah: Ishq Daa Waaris (2006) and Sukhmani – Hope for Life (2010). Co-owner of the Indian Premier League cricket team, Kolkata Knight Riders along with her husband Jay Mehta and Shah Rukh Khan, she was also a founder of production company Dreamz Unlimited, which produced three films, including Phir Bhi Dil Hai Hindustani (2000). Chawla has also worked on television, featuring as talent judge on the third season of the dance reality show Jhalak Dikhhla Jaa.

Born on 13 November, 1967 and raised in Ambala, Haryana, she schooled at Fort Convent School, Bombay, graduating from the city’s Sydenham College. Winning the Miss India title in 1984, she also won the Best Costume Award at the Miss Universe contest in 1984. She made her film debut in 1986 with Sultanat, written and directed by Mukul S Anand. The film failed at the box office, and the following year, Juhi was seen in the Kannada film Premaloka (1987), directed by Ravichandran, which was her first commercial success. She won audiences over with her first major role in Hindi films, in the star-crossed musical romance Qayamat Se Qayamat Tak, directed by Mansoor Khan. The film became a huge critical and commercial success, elevating its lead pair to instant stardom. While the film bagged the Filmfare Award for Best Film, Chawla became the first actress to win the Filmfare Award for Lux New Face of the Year, as well as first nomination for Best Actress. Juhi Chawla came in for particular praise, hailed by critics for being an early predecessor of the liberated heroines of today, as she matched her flouncy ghagra with an assertive demeanour, initiating a relationship with the man she desired.

The year 1990 saw her star in Pratibandh, opposite Telugu star Chiranjeevi, receiving her second Filmfare Best Actress nomination for the film. She first collaborated with director David Dhawan in the family drama Swarg (1990); it was the be the start of many. She received her third Filmfare nomination for Best Actress for Bol Radha Bol (1992) in which she was paired alongside Rishi Kapoor. The year also saw her paired opposite Shah Rukh Khan in the Aziz Mirza comedy Raju Ban Gaya Gentleman (1992), with whom she would also go on to collaborate frequently. The following year, she featured in no less than four hit films—namely, Lootere (1993), Aaina (1993), Hum Hain Rahi Pyaar Ke (1993), and Darr (1993). Chawla’s multi-faceted talent was there to see in the range of roles she essayed, whether as the young woman who receives witness protection through the service of a bodyguard in Lootere; a love triangle in which she and her sister fall in love with the same man in Aaina; a Tamilian runaway in the romantic comedy Hum Hain Rahi Pyaar Ke, or the young woman on the brink of marriage to her fiancé who becomes the object of a young man’s obsession in Darr. Juhi won the Filmfare Award for Best Actress for her work in Mahesh Bhatt’s Hum Hain Rahi Pyaar Ke, in which she impressed not only by her flawless rendition the Tamil language, but also her on-point comic timing.

Among her other key releases are Ram Jaane (1995) co-starring Shah Rukh Khan, Naajayaz (1995) alongside Ajay Devgan and Loafer (1996) opposite Anil Kapoor. While she received a Filmfare nomination for her battered wife performance in Abbas-Mustan's thriller Daraar (1996), she had a slew of box office successes in the romantic comedies Yes Boss (1997), Deewana Mastana (1997) and Ishq (1997). Even in films which under-performed at the box success such as Duplicate (1998), Jhooth Bole Kauwa Kaate (1998), Saat Rang Ke Sapne (1998), Arjun Pandit  (1999), Chawla was inevitably hailed by critics as a saving grace. The new millennium saw her combining forces with Shah Rukh Khan and filmmaker Aziz Mirza to start the Dreamz Unlimited production company. Her performance as journalist Ria Bannerjee in the company’s first production, the romantic comedy Phir Bhi Dil Hai Hindustani, was rated as one of her best, even though the film did not thumpingly win the box office. Similarly, she won applause for her triple role in One 2 Ka 4 (2001), despite the film not succeeding at the box office.

Changing tack, Chawla opted for independent and art films, winning praise for her performances in critically acclaimed films such as the musical comedy Jhankaar Beats (2003) which was a tribute to music director R D Burman, 3 Deewarein (2003) for which she won the Star Screen Award for Best Supporting Actress, the black comedy opposite Irrfan Khan 7½ Phere (2005), My Brother Nikhil (2005) which was a sensitive depiction of the struggles of same sex love, and the Onir-directed Bas Ek Pal (2006). She was appreciated in the ensemble drama Salaam-e-Ishq: A Tribute To Love (2006), the Punjabi historical drama Waris Shah: Ishq Daa Waaris (2006) which won a National Film Award, Swami (2007), Bhoothnath (2008) in which she made her singing debut, and her guest appearance in Luck By Chance (2009). Her performance as the vulnerable Kashmiri woman who travels back to her hometown in Srinagar in Onir's critically acclaimed I Am (2010), won her the Best Actress award at the 13th London Asian Film Festival and Award for Excellence in Hindi Cinema at the Asiavision Movie Awards, as well as a nomination for the Filmfare Award for Best Supporting Actress. Son of Sardaar (2012) was trashed; however, she was singled out for praise for making her character pathetic as well as feisty. Playing the antagonist for the first time in her career in Gulaab Gang (2014) alongside Madhuri Dixit, her performance as the opportunistic politician who lusts for power, earned her rave reviews. Among her more recent outings are the woman-centric drama Chalk n Duster (2016), and the Alt Balaji web series The Test Case (2017).

She has also made forays into television, featuring as a talent judge for the third season of Sony Entertainment Television India's dance reality show, Jhalak Dikhhla Jaa in 2009, as well as hosting Colors's kid's chat-show Badmaash Company- Ek Shararat Hone Ko Hai in 2011.

Married to industrialist Jay Mehta in 1995, the couple has two children—Jhanvi and Arjun. 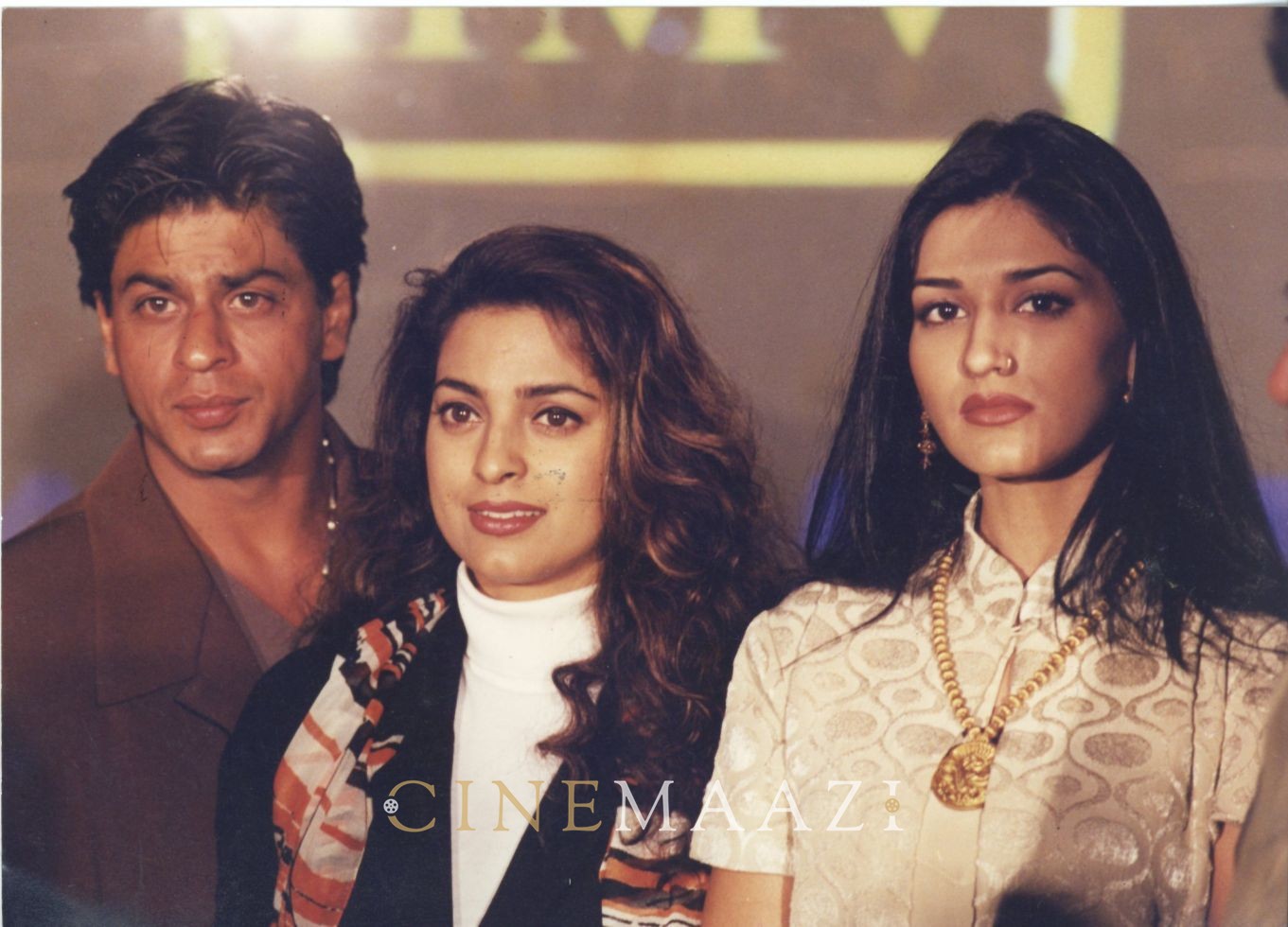