A journalist (Roja) writing a book on humanism, visits the dilapidated Bharath Theatre which was ravaged by a bomb blast a few years back. Children playing in the theatre, unaware of the theatre's tragic past, ask her about it, and she narrates. Flashback to a few years ago...

A bomb blast occurs at the market place near a Chit Fund company, killing many people. On getting a call about bombs placed at the ever-popular Bharath Theatre, the police rush there. Bharath Theatre is owned by Rathinam Master or Ayya (R. Parthiban), a respected man whose late father-in-law was the original owner. When not screening films, Ayya benevolently allows the theatre to be used for marriages. He also feeds the poor, educates children, and people in that area respect him for his good deeds. When the tax officials come for inspection, impressed by the goodwill he commands, leave without checking the records. The theatre with a seating capacity of 1047 always records House Full shows. People from all religions and walks of life come here for the nobility attached to it; hence it is popularly called 'Bharath Theatre'.

Currently, the film Miss 2000 is being screened and the audience includes a State Minister. Hameed (Vikram), a lorry cleaner, loves Indu (Suvalakshmi), a roadside flower seller and they have decided to get married. Hameed invites Indu to see the film with him. Indu asks him to go to the theatre and promises to join him soon. Hameed joins the crowd in the theatre, while Indu is delayed.

Learning that his clerk was injured in the bomb blast near the Chit Fund Company, Ayya rushes to see him at the hospital. The police, headed by the Commissioner (Surya) arrive at the theatre. The show has already begun and everyone inside is enjoying the film. By then, the bomb squad, headed by a senior officer (Ratan), also arrives.

The bomb squad officer fears that bombs may have been placed below seats with a system to explode if the person gets up or when there is any commotion. To avoid commotion, the officers decide to thoroughly search the theatre, remove the bombs, and evacuate the people methodically.

On coming to know about the bomb scare in his theatre, Ayya rushes back, meets the officials, and expresses confidence that he can bring them out without any problem. However, both officers refuse and ask him to allow them to do their duty, assuring that they will ensure the safety of every single person inside. The Minister brought out first, is shocked as he leaves the theatre.

The police get a phone call that five bombs are placed inside the theatre. The bomb squad including a lady officer (Aiswarya) thoroughly searches the theatre and starts removing the bombs. A blind man, one of the audiences, senses a bomb and brings it out which saves many lives. To ensure the audience remains in their seats, the theatre runs the film without any intermission.

Meanwhile, Ayya's ex-wife (Jayanthi), who abandoned him immediately after marriage and (with Ayya's permission) joined her lover, comes there and pleads with him to come out. Ayya had married her as instructed by his boss (her father) without knowing that she loved another person. He refuses to go out and she decides to stay inside the complex to bring him out.

The police and bomb squad gradually evacuate the theatre until only some people remain inside. Coming to know about the bombs, Indu enters the theatre through another entrance in search of Hameed. A terrorist beats a bomb squad member, wears his uniform, enters the premises, and plants another bomb inside the theatre in an area that has already been searched. When the police notice the injured bomb squad member, they rush and finally trace the terrorist. They beat him to learn more about the bombs. He finally reveals the remaining bombs and that they will explode in a few minutes. Panic strikes.

With only 50 seconds left for the bombs to explode, Indu shouts about the bomb, and the people inside leave in a panic. Hameed comes out and unites with Indu. Ayya also leaves reluctantly after confirming the theatre is empty. After coming out, Ayya hears a child crying inside the theatre and rushes back inside despite warnings from the officials. However, on reaching inside he realizes that the child crying is the last scene from the film, but it is too late. The bombs explode, bringing down the theatre and Ayya, his supreme sacrifice to ensure the safety of everyone in his theatre. The journalist (Roja) who narrated the tale to the children hopes that it will be "The End" for such senseless violence. However, a child rushes in and informs about a bomb being planted in a school. Frustrated, the journalist writes "The Endless". 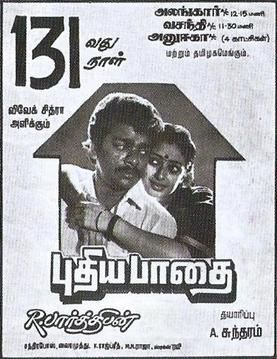