Opening in a courtroom, where a Revolutionary is charged with treason in 1950 for his involvement in an armed revolt, Inquilab Ke Baad goes back to 1931 when Mohit Mitra, the Revolutionary hero, had been involved in yet another adventure, an armed, underground insurrection against the British rules in the town of Bhagwangunj. The 1931 flashback beings with a bank raid by the nationalist revolutionaries, followed by a meeting of the revolutionaries in an abandoned warehouse on the river side. Bijoy Ghoshal, representing the the non-violent line in the movement, disapproves of their violent tactics. Left together at the end of the meeting, Shubra and Mohit confess their love for each other, but resolve to remain wedded to the cause of the revolution.
The packet-steamer KARATOA bathed on the river shows a family trying to live a life sheltered from the tensions raging through the country. Satya Mitra, Mohit’s father is a tally-clerk in the ship carrying British cloth from port to port, loyal to the crown, he does not know of his son’s involvement in the movement. Savitri, his wife, is in the confidence of her son. Madhu, Satya’s brother, is a parasite, slightly ridiculous, and a compulsive chess – player. The two little daughters go to the town to school and bring back details of police terror on the non-violent protesters.
Meanwhile, Mohit and Kamelesh charge a police company with bombs to save Bijoy Ghoshal, from being arrested and leave two Sergeants dead. The revolutionaries carry the wounded Bijoy away and seek shelter in the ship. The father now knows for the first time what his son has been involved in. The loyal tally-clerk gives in, only after some initial resistance. The wounded Bijoy is carried down to the middle hold of the ship where he is nursed by Savitri and Millie, her elder daughter. Satya is now part of the operation to carry Bijoy to safety. He seeks and gets permission to set sail, while in the town itself the police follow the trail of a pullover abandoned at the site of the Bank robbery. The pullover is traced to Shubra who had knitted it for Mohit. Shubra is taken away for interrogation from the classroom where she was teaching History.
A doctor is smuggled into the ship to examine Bijoy, and the launch sets off with the frightened doctor in it. An inquisitive informer who boards the launch before it sets off is strangled to death and unceremoniously dropped into the river. But another visitor to the launch manages to slip off in time with useful information for the police. Manningham acts on Kamakaya Banerjee’s clue, catches up with the steamer in mid-river, and in his search for incriminating evidence, he almost comes to the truth before being fooled by Satya, the father with a lie. The interrogation of Shubra is a battle of nerves in which Shubra never breaks down. But the doctor, who comes with the police, shows the currency notes he has received for his professional services on the launch and their numbers tally with those stolen from the bank. The search for the fugitives is over. They must be on the ship itself.
The chase begins. But before the ship can be tracked down, Bijoy is put ashore with the money. The family stands solidly behind Mohit and Kamalesh, and resist the attack from the speedboat with their weapons, only to be riddled with gunshots. Mohit is the only survivor at the close of the gun battle. The British soldiers rush into an orgy of tyranny to celebrate the capture of Mohit Mitra. Even as Shubra enjoys a respite and left alone for the first  time, allows herself to break down and weeps, a, Junior Officer brings her a packet sent by a pupil of hers. The packet contains revolver. The junior officer knows it and whispers to her, “What makes you think you alone love your country?” When Manningham returns gloating over their victory, a shot from Shubra’s revolver cuts him short.
In the trial that follows Mohit is transported for life, and Shubra sentenced to death. With her heroic last minutes on the screen, the film flashes forward to another trail, where Bijoy Ghoshal denounces Mohit as a traitor, and Mohit extorts with a reminder of how his family and the crew of the ship had laid down their lives, how Shubra had suffered and how Mohit had endured the long imprisonment, only to save Bijoy who now stood exposed. Mohit is sentence to another twenty years in prison in a country which he had helped to become free. 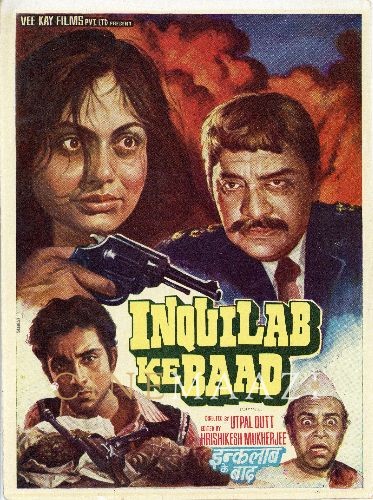