The city lay in calm slumbers after the toils for the day—privileging the few night prowlers to persecute their strange vocations.

In a distant and morose looking city district lay the den of a gang of Criminals headed by " DYNAMITE” — the terrorizing nom-de-plume of a reputed citizen. The citizen was academically trained; he was an intelligent scientist who knew principles of chemistry and alchemy. Behind his den was his laboratory of experiments, where he manufactured poisons with different degrees of virulence. These he administered to his victims in a rather notorious manner.

With the opening of our story, the city is all stirred up by a great Bank robbery. A night of nights Marine Bank is looted; watchman killed; — really a daring adventure of a few clever ruffians in spite of the police vigilance.

The headman, No. 1 of the DYNAMITE gang with his booty runs straight to his quarters and distributes the loot amongst his friends and neighbors inviting them to come to his fold. DYNAMITE, always on the alert, follows his betrayer, wounds him with his pistol, and terrorizes the locality. Subsequently, DYNAMITE carries the wounded betrayer to his den and before his legion, brands the victim's cheek with red hot dragon mark; the poison trickles through blood, and the victim dies.

The police work on the clue of this brand-mark but to no avail. Two press reporters, who accidentally happened to be on the spot of crime, give first-hand information to the authorities, but they are neither believed, nor given credence. This rather stretches efforts of all concerned and affords further chances to the gangsters. They are always on the alert and will not let an opportunity of a big pull go by. The reporters, crack-headed, and wondering as they are, curse their luck for detention at the police station; return to their press office, and enthuse over their reports before the editor. But the enthusiasts were too late,— rather criminally late. They are distressed, return home and the housewife dismisses them also. So they become vagrant almost starving and jobless.

Vasant is a rich millionaire, young and idle, indifferent and careless; and unluckily in love with the vivacious and wistful Jyoti, daughter of one of the partners of city's famous diamond firm called Ramkrishna & Co. The second partner also had a daughter by name Madhuri, who was in love head over heels, with one Madhoo, who happened to be an unwilling member of the DYNAMITE gang. Very strange circumstances had led Madhoo, to this gang, and now he was amply repenting for his indiscretion. DYNAMITE had long had an eye on the wealth of Madhuri's father, and orders, by a radio message transmitter the gang, apparently running a cloth store during day time, to raid the house of Madhuri's father. Madhoo's courage ebbs out, and desires to avoid taking part in the raid, but is compelled.

The night raid occurs, safe is broken open, and the father of Madhuri is killed in an unguarded encounter. Madhoo takes a chance to outwit the gangsters and hides in Madhuri's bedroom. Later police arrive and search the premises and arrest Madhoo in an act of escape. Madhuri is overwhelmed with grief to know that her beloved Madhoo, belongs to a band of criminals. Madhoo, in the hands of the police, is coerced, threatened, and thrashed in order to commit to the police, the knowledge about who DYNAMITE is. He pleads his inability and is thrown in custody.

Time passes; the reporters, now almost in rags, wander city streets like the minstrels and accidentally come across Vasant. They compare his face with that of Madhoo in Jail and find an amazing similarity between the two faces, and they get the first brilliant idea of their life.

By a funny move, they are instrumental in raiding the Gangsters' store and bargain their intelligence by substituting Vasant in Jail for Madhoo, and later install the former in place of the unfortunate victim.

The police remove Madhoo elsewhere and install Vasant in jail who finds this adventure as a novel experiment. DYNAMITE arranges the escape of Vasant when he is in a stone quarry laboring with his fellow prisoners. Vasant acting on behalf of the police, dressed and made up as Madhoo, joins DYNAMITE gang—where to his amazement he finds Madhuri, already a member like himself. Madhuri, evidently mistaking Vasant as Madhoo, begins her overtures and the care-free soul of Vasant revolts at the feminine attack on his modesty. During one of his love-meetings, Vasant encounters Padmanabh, a gangster, who was all fallen for Madhuri's love. He thrashes the latter and enmity between the two members rears up.

Meanwhile, DYNAMITE decides to make a shift with a big haul of diamonds in the party given to a state Minister by Ramkrishna & Co. Jyoti appears all loaded with diamonds, and during the dance, at the party, the girl is bodily removed by the DYNAMITE gang. Unfortunately, DYNAMITE finds the jewels fake, and later telephones to Seth Ramkrishna, that unless the real diamonds are returned before morning the girl will be no more. Ramkrishna delivers precious jewels to save his daughter. But by a clever move, Vasant conducts affairs with the help of the police rather smartly.

DYNAMITE gets hemmed in—on all sides, and is ultimately killed! The mystery of the great criminal breaks and lo!! We find—Who!!!

Please see your answer on the screen. 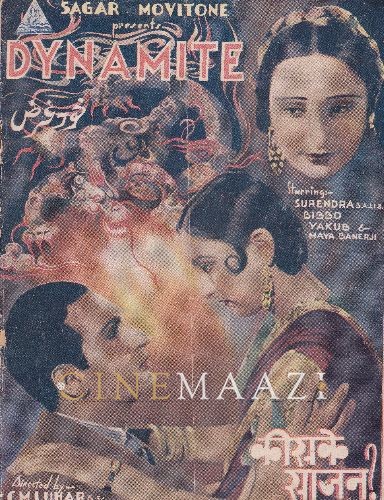 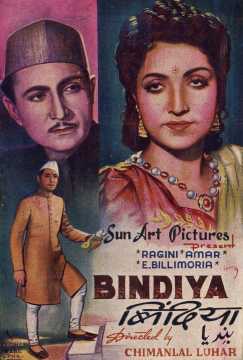 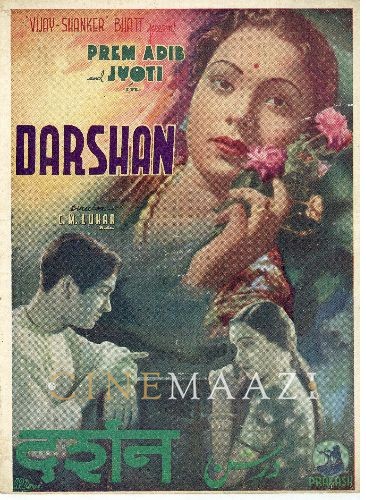 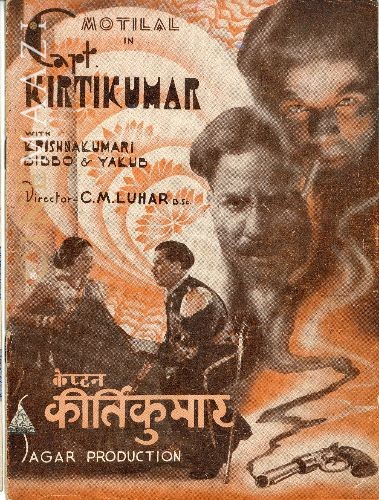