This is a tale of burning LOVE, - so passionate, so pathetic and so poignant. It tells of trials and tribulations of a damsel who dared love a young man of her choice, of her own dreams against the will of the society.

It tells of Malati and Vinod-both of whom were devoted to each other. Malati's youthful heart burnt when she was denied the love of Vinod. Vinod voiced out the vapour of revolt when he was asked to marry someone else-one Indeera, a coquettish young girl, selected by Vinod's mother.

But, Vinod was adamant to offer his life, love and soul to Malati against all the domestic and social barriers. For days, weeks and months Malati and Vinod, hand in hand, heart to heart and soul to soul had trampled the green grass on one and the same track of life. They had their castles of rosy love built together when both of them rambled along the green river bank of that village. Both of them drank deep at the same fountain of love, life and laughter.

But as fate would have it, Vinod had to go away - far away into the wilderness of war.

But did he return?

Gone were those days of love, when Malati used to sing the sweetest songs of their happy life together. The golden memories of their love disturbed her heart and her heart began beating fast.

Years passed away. Indeera was waiting for her chance to get Vinod for her through Vinod's mother. Mother had so fondly wished to make Indeera as her daughter-in-law....

Then the little God of Love smiled at Malati. Vinod returned home. Mother took the first opportunit to see that Indeera and Vinod were married blissfully.

Indeera began scheming, all the willy ways, all the cheap and cunning trickery and intrigues were used by Indeera to make Malati unhappy. Indeera poisoned the minds of the mother and Vinod against Malati.

There were troubles for Malati... Vinod was unhappy because of the domestic intrigues. A moment came, when Indeera proved herself as an iron curtain in between the love Vinod and Malati.

Vinod behaved harshly with Malati and there were tears in her eyes. The love of Malati and Vinod was soon going to bear the fruit. And the day came when there was a little daughter crying and smiling in the lap of Malati.

But as Fate liked to play a cruel joke on Malati, a moment arrived for her when one cold night she had to leave her home. What happened then is most remarkably told in Super Team Federal Productions' "MERI KAHANI" the terrific flow of events of which should better be seen on the screen. 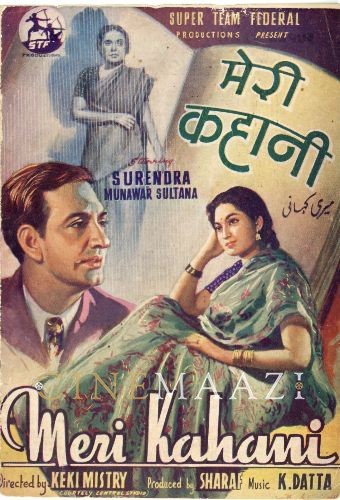