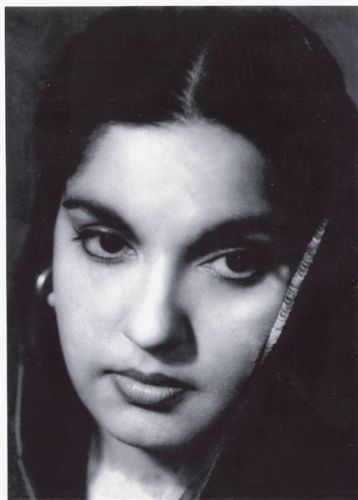 ‘She is one of those few artistes gifted with a pleasant screen personality. She possesses, in addition, a husky voice which forms the basis of her sex appeal. Well-modulated and distinct, her voice keeps harmony with her expressive face and she never fails to move the audience in emotional situations.’ These words of praise came from Baburao Patel, famous editor of Filmindia, as he wrote about Munavvar Sultana, star of the 1940s. Born on 8th November, 1924 in Lahore, undivided India, she was best known for playing the self-sacrificing Indian woman in a brief but successful film career. She ruled the hearts of her audience with her beauty and performances. However, within a short time, she chose to give up fame for domestic bliss. Devoting herself to her family, even her contemporaries did not know about her whereabouts, when in fact she lived with her family at Pali Hill, Bandra till she passed away at 83.

Daughter of a radio announcer, she quit her childhood dream of becoming a doctor to play a small role in Khandan (1942). Produced and directed by Dalsukh Pancholi, owner of Lahore-based Pancholi Pictures, this hit film starred Pran and Noorjehan in the lead with music by Ghulam Haider.

Offered the opportunity to star in actor-producer-director Mazhar Khan’s film, Pehli Nazar (1945), Munavvar moved to Bombay. She was signed on for Rs.4,000 a month, which was a considerable amount more so for a newcomer. She starred opposite Motilal in the film, which also saw singer Mukesh make his playback singing debut. The film paved her way as a leading lady in Hindi filmdom.

Munavvar Sultana was known for playing the typical virtuous wife. Among the roles she is remembered for, is the lead in Mehboob’s Muslim social, Elaan. She played a young woman who sacrifices her love for the hero, Surendra, and marries his evil cousin, Himalaywala, instead. As fate has it, the once-lovers meet again years later when he, a lawyer, defends her as she stands accused of killing her vagabond husband. She hit her high as an actress in Kaneez, co-starring Shyam, in which she again played the good wife trying to win her husband back, even as the vamp, Kuldip Kaur, nearly destroys their marriage. In Babul, a love triangle, she and Nargis fall in love with hero Dilip Kumar. Giving arguably the finest performance of her career, she plays the proud daughter of a rich zamindar who changes for the better after she and Dilip Kumar fall in love. However, in the end, she is made to sacrifice her love and marry elsewhere. Naushad’s musical score in Babul, especially the wedding song Chhod Babul Ka Ghar, and Milte Hi Ankhen Dil Hua Deewana Kisi Ka, picturised on Munavvar and Dilip Kumar, were highly popular. Despite becoming synonymous with intense domestic dramas, Sultana herself yearned to be part of films that were simpler and low-key.

Post Babul her career slowed down as the hits dried up. In 1954, Munavvar Sultana married Sharaf Ali. He was a famous furniture retailer and had also produced two films - Meri Kahani and Pyar Ki Manzil under the ‘Super Team Federal Productions’ Banner. Sultana went on to quit films, her last being Jallaad, which released after her marriage. In 1966, after the sudden demise of her husband, it fell on her to handle both domestic (the couple had four sons and three daughters) and business responsibilities. To her credit, she successfully handled both.

In the later years of her life, Munavvar Sultana suffered from Alzheimer’s. She passed away on 15th September, 2007 in Mumbai at the age of 83.