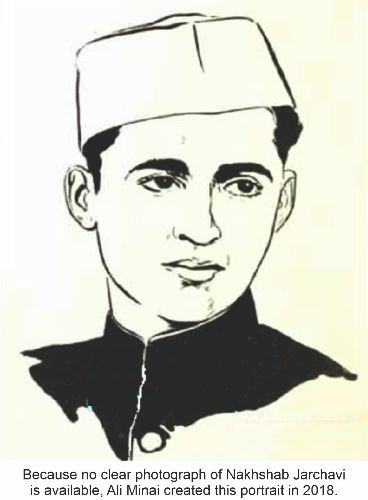 Poet, lyricist, writer and director, Nakshab Jarchavi was born in Jarcha, Uttar Pradesh on 12 July, 1918 (some accounts suggest his year of birth as 1925). After graduating from Aligarh Muslim University, he moved to Bombay. A poet and lyricist par excellence, he went on to give Hindi cinema many popular songs from the mid-40s till the early 50s. He wrote the lyrics for the qawwali Aahein na bhareen shikway na kiye, kuchh bhi na zaban se kaam liya for the Eastern Pictures film Zeenat (1945). It was rendered by the powerful trio of female singers, Noor Jehan, Zohrabai Ambalewali and Amirbai Karnataki.

It was with the songs of the Kamal Amrohi-directed film Mahal (1949), which became a huge hit, that Nakshab Jarchavi grabbed attention. The ghazal, Ghabra ke jo hum sar ko, penned by Nakshab, was rendered by Rajkumari. The haunting Ayega anewala is perhaps his most famous song for Mahal for which Khemchand Prakash composed the melody. However, while the film garnered fame and fortune for filmmaker Kamal Amrohi and singer Lata Mangeshkar, the struggle continued for Jarchavi.

Jarchavi got into filmmaking, turning film producer, director and writer. Nagma (1953) and a musical hit Zindagi Ya Toofan (1958) are among the films he made. The star cast of Filmco’s Nagma included Murad, Nadira, Ashok Kumar, and Roop Mala. His Zindagi Ya Toofan was loosely based on Mirza Hadi Ruswa's novel, Umrao Jaan Ada. It starred Pradeep Kumar, Minoo Mumtaz, and Nutan.

In 1962, he decided to migrate to Pakistan. He made two films there - Fanoos (1963) followed by Maikhana (1964). In Maikhana, he introduced music director Rashid Attre and Pakistani actress Firdous. Both Attre and Firdous went on to achieve immense success in Pakistani cinema.

Jarchavi was also instrumental in changing film composer Shaukat Ali's name to Nashad for his film Nagma (1953), starring Nadira and Ashok Kumar. Nashad retained this name for the rest of his life. Apparently, it was Jarchavi who convinced Nashad, who was his close personal friend, to migrate to Pakistan from India to compose music for his film Maikhana. Nashad won the Nigar Award for Best Music in this film for 1964.

Nakhshab Jarchavi and Indian film actress Nadira were first romantically involved with each other, and went on to marry. It is said that Nakhshab made Nadira break her contract with Mehboob Khan and together the couple produced films like Nagma (1953) and Raftar (1955). However, their marriage did not last long and the couple separated. They eventually divorced in the 1950s.

On 24 August, 1967, the talented and flamboyant Nakshab Jarchavi met an untimely death in Karachi, Pakistan.