When Rai Shaib Chunnilal gave a promise to his dying friend that he will share the proceeds of the fabulous Heera - which had been unearthed by their joint venture extending over 12 years in the African jungles - with his son Kishore, he sincerely meant it. But on his arrival back in India, he becomes the target of a conspiracy hatched by the notorious BLACKNIGHT and his henchmen led by Ramesh. Not only they succeed in inducing the Rai Shaib to go back on his promise, but also robs him of the real diamond by trickery and puts up a fake glass in replacement.

Unaware of all these intrigues, Kishore on learning of the death of his father runs down to the city to meet Rai Shaib. But, he is cunningly turned away from the gate by Ramesh, who happens to be present there. Dejected, helpless Kishre is accosted of a theatrical company who is looking for a male artist for his show, and is immediately tugged away by Charlie in the company's employ as a hero.

Kishore's class-mate Asha is Rai Shaib's daughter, but none of them is aware of this. Informed by Ramu, the faithful domestic who was present during Ramesh's visit to Rai Shaib, of the plot to rob Kishore of his share, Asha goes to meet him at the Coffee House. There, Ramesh who is ordered by Blacknight to overhear their conversation finds Kishore telling his father's tale to Asha. In order to wipe out Kishore, Blacknight orders to change Charlie's fake pistol into a real one the night's show.

Who is HUNTERWALI who appears whenever Kishore and Charlie are in trouble and help them out of their predicament?

What cause of revenge has MISS HUNTERWALI against BLACKNIGHT, a ruthless scoundrel and invisible enemy of justice and society?

Does MISS HUNTERWALI eventually succeed in bringing BLACKNIGHT and his gang to book and restoring mental happiness to Rai Shaib?

To these and many other questions, the Silver Screen will give an answer in........

MISS HUNTERWALI - the picture with a difference. 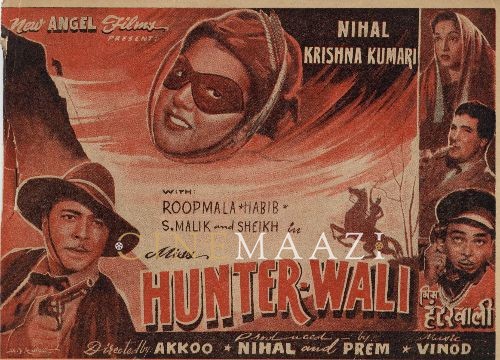