This is a strange world where life is in itself a great puzzle. Its intricacies are confounding. You love someone-only to find that the person you love, loves someone else. The reason can be traced to the misconception of love. Yet one is persistent to win the forbidden love. And is the Life.

So, one day when she finds that her choice hero lets her down and forsake her, she picks up a happy-go-lucky roving guy, Raju, to make him the hero of her stage. And she actually succeeds in grooming a hero out of Raju, who overnight becomes the hot favourite.

For all she had done to make Raju a popular hero, flourishing in fame, fortune and happiness it is her right to love Raju. And why not-she possessed all the money and means.

But not it heart to win over Raju. Raju was least inclined to stay in Leela's dreamy world or pawn his heart to her dictates.

Instead, he finds the solace of his heart in an innocent but gay village girl, Chanda, who lives with her aged father in poverty. Chanda is drawn towards Raju at the first sight.

But Chanda's father had promised to marry her with Sunder, a man of questionable character and means, who was always liberal with cash and kind just to keep up his pretensions that he was a big guy of good means.

Leela was keen on Raju. In the background of the cupid's strides, the unscrupulous Manager of the Mohan Theatrical Company plays his wicked hand, to have his vengeance on Raju. And he conspires with Sunder, who was ever keen to marry Chanda, to throw Raju into hot waters.

Now, fate throws its mischievous darts.  Simder was desperate in his artifices and becomes a tool in the wicked hands of the Manager, who was at the peak of his villainous cover up his wicked deeds. Leela stakes all her prestige to win over Raju. Raju loved only Chanda and none else. While Chanda was a silent victim and suffered the worst. Her treasure of true love against her poverty coupled with her father's obstinacy could not give the happiness, torture and fame which Raju deserved. Only Leela could give him all.

But Raju's heart refused to respond to Leela. So what?

This is the human puzzle for you to solve. Do it with your heart and not merely guess. The clues are before you. But only "Nakhre" can provide the solutions. 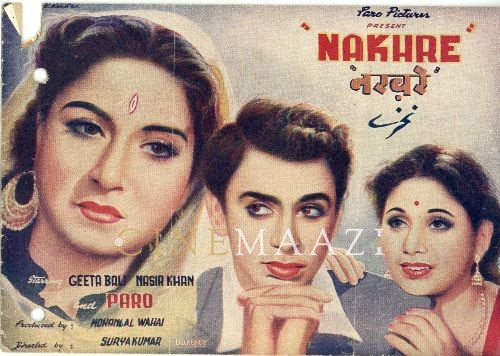