Born as Harkirtan Kaur on 30 November 1930 in a Sikh family, Geeta Bali is still remembered for her spontaneity, gaiety and her inimitable personality with which she livened up the Hindi film screen in the 1950s.  Geeta Bali’s father, Kartar Singh, was a missionary and therefore the family was continuously on the move through Malaya, Burma and Ceylon. Due to this constant migration, Geeta never had the chance to receive regular schooling. While they were in Kashmir she started music and dance lessons and soon grew adept in them. She soon learnt that her dance practice came with some risks - as during one performance in Lucknow scandalised conservatives vandalised the pandal. She gathered courage and went to the All India Radio, Lahore office by herself and applied for the position of a singer. After that, Geeta became part of a singing group of children in the AIR. While working in radio, she was also fascinated by the relatively new medium of cinema.
At the age of 12, she was cast as a chorus girl by Pandit Gyan Shankar – a dance director in Punjabi Films – in Shorey Pictures’ documentary The Cobbler/Mochi. Noticing her talent, Roop K. Shorey gave her a solo dance in Badnami (1946). Mazhar Khan was in Lahore for the release of Paheli Nazar (1945) when he happened to see Geeta perform. He signed her on and she moved with her family to Bombay to work. Mazhar Arts’ Guest House provided Geeta with her first role but this ill-fated venture never moved beyond its muhurat. She then met Kidar Sharma, and it resulted in a memorable collaboration in his film Sohag Raat (1948) opposite Bharat Bhushan. As the vivacious Kammo, an unsophisticated daughter of the hills who was strong enough to carry an unconscious man on her back while marching to her home, she won many hearts. In Bawre Nain (1950), she again worked with Kidar Sharma for a role opposite Raj Kapoor.  Dev Anand became a frequent co-star with films like Baazi (1951), Jaal (1952), Kashti/Ferry (1954), Pocket Maar (1956), Faraar (1955) and Zalzala (1952). At the peak of her career, she also tried her hand at producing films with Baaz (1953). Baaz was helmed by Guru Dutt who had previously directed her in Baazi (1951) and Jaal (1952). Geeta’s filmography had a wide range of interesting characters – she avoided being typecast and picked different kinds of roles to perform. An example of the same is her wonderful portrayal of Suraiya’s deceitful younger sister in Bari Bahen (1950).
Geeta Bali never seemed to be too concerned with the glamour of the film world. Her attractive features and versatile talent were enough to keep viewers engrossed in her films. Rated as the top star in 1950s, she appeared in a number of films including Dulari (1949), Anand Math (1952), Milap (1955), Vachan (1955), Jawab (1955) and Albela (1951), which featured her in the chartbuster Shola jo bhadke.
Geeta Bali and Shammi Kapoor had fallen in love, but she was heistant to commit to him as her income was providing for her family. it is said that she agreed to to play a male role in Rangeen Raten (1956) just to be with Shammi Kapoor. During the outdoor shooting of Rangeen Raten in Ranikhet, Geeta married Shammi Kapoor..  The couple is seen together in Rangeen Raten (1956), Coffee House (1957), Miss Cocacola (1955), Mohar (1959) and Jabse Tumhen Dekha Hai (1963), which turned out to be her last release.
Geeta passed away on 21 January, 1965 in Bombay after contracting small pox and could not complete her shooting for the film Rano, a Punjabi film adaptation of Rajinder Singh Bedi’s famous novel Ek Chadar Maili Si. 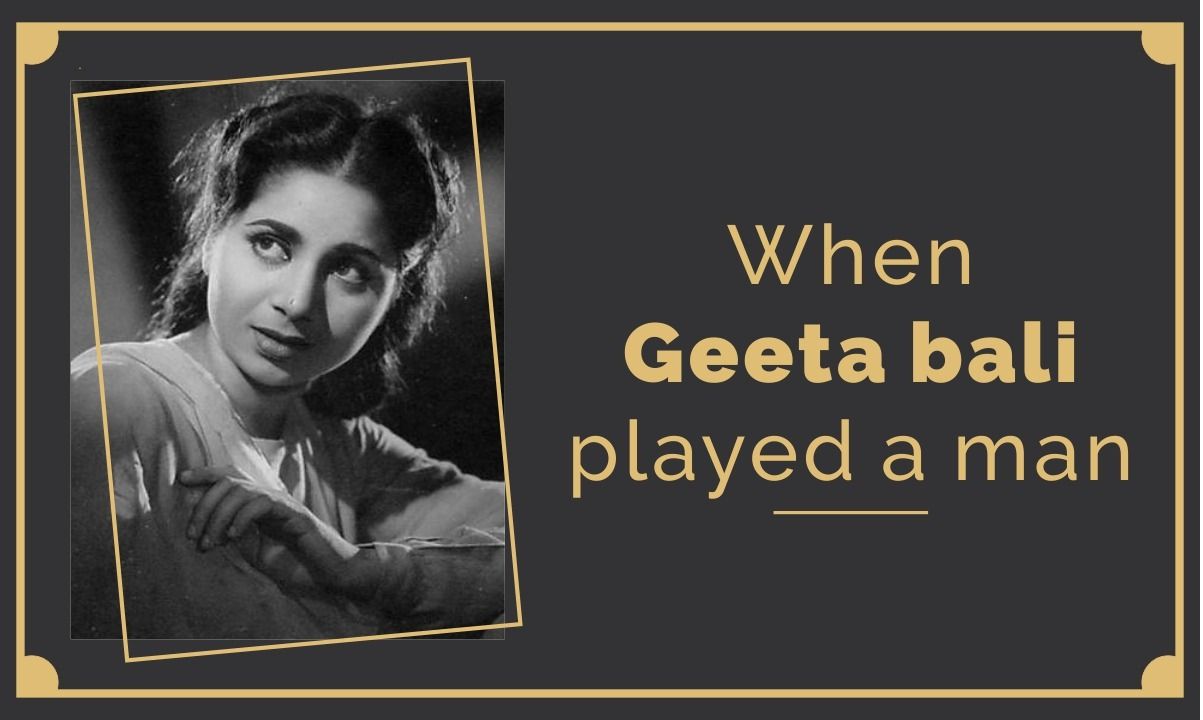