NAMOONA is an essay in social synthesis as well as analysis. It purports to produce a pattern of social re-adjustment on the board canvas of life, the lines and contours of which are furnished by the multifarious anomalies that we find around us.

Besides, NAMOONA also aspire to be an experiment in motion picture entertainment, having for its objective the evolution of a formula which can provide a judicious blend of art, drama, humour, emotion, pathos and above all music within the compass of a feature film.

This experiment has proved eminently resultful. For, there is hardly anything which is left wanting in the narrative of this screen classic. The asides and interludes which the picture contains touch and dwell upon various sociological problems and answer many of the interrogations thereof in the accents of subtle satire.

The story of NAMOONA begins with a dramatic performance in aid of refugees. The chief participants in this show are Rekha (Kamini Kaushal) - grand-daughter of one Baba Dedas (Sanyal) supposed to be a man of great pomp and circumstances; Jeevan (Dev Anand) - refugee boy who has lost his all in the Punjab holocaust and is beginning life anew as a student of the same college where Rekha studies, and Barrister Kedar (Kishore Sahu), Advocate General of the City - a man of high birth, higher education and highest intellectual achievements. He has spent a considerable part of his life in the progressive and intellectual centres of the West and has come to be a sort of Social Automation, i.e. a person who through the process of intellectual evolution has attained that stage of detachment when emotions count for nothing and one looks at life and its problems from a cold-blooded, logical non moral and utilitarian angle. He is made the President of the performance.

Her first introduction attracts Rekha towards Jeevan and a mere acquaintance soon develops into intimacy, which in turn yields place to infatuation. But the course of her love is not destined to have the smooth sailing as she imagines. Anon comes the rift in the lute and impediments creep in from everywhere.

Her birth becomes a controversial point. Frustration overtakes her while Jeevan finds himself wedded to calamity.

Baba's dreams are shattered, for he had set his hopes on Barrister Kedar as the husband of Rekha.

But this was not to be.

Baba Devdas is implicated in a murder trial. It is a sensational case wherein his prestige-nay, entire life-is at stake. The court meets and a woman-haggard, dishevelled and downcast, appears in the witness box. She is Shyama (Leela Chitnis). She claims to be mother of Rekha. She recounts her woe-begotten past and her tale sets the house sobbing.

She says how utter penury and destitution had forced her to accept the position of a maid-servant in the house of a wealthy merchant who forced her to eat the forbidden fruit.

Rekha was the symbol of that first sin in life. The statement quakes Kedar's uncle and aunt to the marrow. Could Kedar ever be betrothed to the living shame of a spinster?......

But Kedar is indomitable. The sad tale of Shyam helps only to reinforce his determination to marry Rekha.

But does he marry Rekha?

Barrister Kedar takes Shyama to his house wherein she sees the photograph of Kedar's father. She yells out at its sight, as though some great calamity has befallen her unheralded........

Kedar's father was Rekha's father and so the union contemplated could not take shape.

The revelation outwits Kedar too for a trifling moment, but he composes himself and quietly declares that he would atone for the sins of his father. Rekha's future would hereafter be his responsibility. The brother would look after the sister.

While this drama is being enacted at Kedar's house, Rekha is steering her car towards the vale of death; but Jeevan stands between her and disaster. Rekha is saved.

What happens thereafter need to be told. What should have come to pass long ago now takes shape. Kedar blesses Rekha and Jeevan on their life's much-longed venture.

She is resurrected and so is Shyam who is rescued from quagmires of annihilation and disaster and re-installed on her proper place in society. 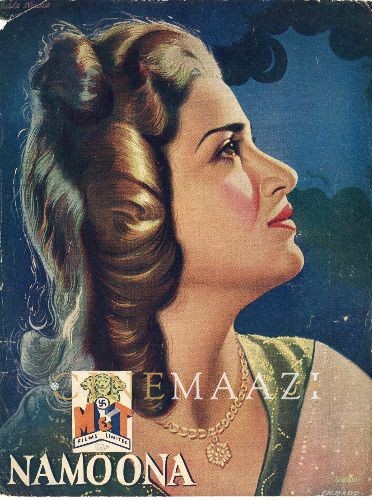