Many decades before the Cannes Film Festival became the ‘it’ event across the globe, Kamini Kaushal featured in Chetan Anand’s social realist drama, Neecha Nagar (1946), which was screened at the first Cannes Film Festival. It won the top prize (then called the Grand Prix), the only Indian film to have done so till date.Kamini Kaushal’s latest outing on the big screen was as Shahid Kapoor’s grandmother in Kabir Singh (2019). This makes it 73 years that she has been active in films—astounding, when you consider that veterans like Ashok Kumar and Dev Anand enjoyed careers that spanned 61 and 65 years respectively. A significant star and producer, she worked with all the top leading men of the time, including Ashok Kumar, Raj Kapoor, Dev Anand, Raaj Kumar and Dilip Kumar. She played the lead heroine in films from 1946 to 1963, winning praise for her roles in Do Bhai (1947), Shaheed (1948), Nadiya Ke Paar (1948), Ziddi (1948), Shabnam (1949), Paras (1949), Namoona (1949), Arzoo (1950), Jhanjar (1953), Aabroo (1956), Bade Sarkar (1957), Jailor (1958), Night Club (1958) and Godaan (1963). Transitioning from heroine roles to character roles, she was acclaimed for her performance in Shaheed (1965). Exploring her creative side further in later decades, she created a puppet show broadcast on television that was the first such children's series in Hindi, wrote and published children's stories, and featured in TV serials such as The Jewel in the Crown (1984) and Shanno Ki Shaadi(2005).

Born Uma Kashyap on February 24, 1927 in Lahore, she was the daughter of famed botanist, Professor S R Kashyap. The youngest of two brothers and three sisters, she completed her BA (Honours) in English Literature from Kinnaird College, Lahore. Her teenage years were spent swimming, riding, skating and doing radio plays on Akashwani, for which she was paid Rs.10. It was one such radio play that filmmaker Chetan Anand happened to hear, and was charmed by her voice. Anand was also a friend of her brother’s, and he went on to offer her a role in Neecha Nagar (1946). Besides her first film break, Anand also gave her, her new name – Kamini; apparently because there was already an Uma in the star cast—his wife Uma Anand. The award-winning Neecha Nagar became the first Indian film to be sent to the Cannes Festival, while Kamini Kaushal went on to win an award at the Montreal Film Festival for her debut.

Post Neecha Nagar, she returned to Lahore, but the offers started pouring in. However, a tragedy struck her family with her older sister Usha passing away in a car accident, leaving two young children, Kumkum and Kavita, behind. Urged by her family to marry her brother-in-law B S Sood, who was Chief Engineer at the Bombay Port Trust, Kamini did as advised, settling in Bombay in 1948 with her husband. She had already signed Raj Kapoor’s maiden production, Aag (1948) in which she played one of his three heroines—Nargis and Nigar being the other two, as well as Gajanan Jagirdar’s Jail Yatra (1947), also starring Raj Kapoor. Kamini Kaushal thus became one of the first leading ladies to continue playing heroine post-marriage.

In the period between 1947 and 1955, in every film that starred her as lead heroine, except when opposite Ashok Kumar, Kamini Kaushal’s name would appear first in the credits before the leading hero's name. She formed a successful pairing with Dilip Kumar, together delivering such hits as Do Bhai (1947), Shaheed (1948), Pugree, Nadiya Ke Paar (1949), Shabnam (1949) and Arzoo (1950) While she was paired opposite Dev Anand in his very first success, Ziddi (1948), they came together again in Namoona (1949), and Shair (1949). Her films with Ashok Kumar included Poonam (1952), which she also produced and Night Club (1958). However, the film that established Kamini Kaushal’s credentials as an actress was Bimal Roy’s Biraj Bahu (1954). Based on Saratchandra Chattopadhyay’s novel, her portrayal of a devoted wife,who believes her husband would never dismiss her as unfaithful, won her the Filmfare Award. Another intense performance came in Sohrab Modi’s Jailor (1958), in which she played a wife propelled towards adultery owing to her husband’s tyranny.

Privileged to have a huge fan base, she was also the first lead heroine for whom Lata Mangeshkar sang in Ziddi (1948); previously the latter had only sung for supporting actresses. While Kamini Kaushal did frothy roles in films like Chalis Baba Ek Chor (1954), she was also adept at more serious roles as seen in Aas (1953), Aansoo (1953) and Jailor.

The 80s also saw Kamini explore her creativity in different avenues, as she made TV serials for children for Doordarshan (Khel Khilone). She also made puppet-based TV programmes (Chand Sitare, Chaat Pani and Chandamama), for which she made all the puppets herself, even moulding and lending her voice to different characters. She also wrote stories for the children’s magazine Paraag, basing the characters loosely on her own children and their cousins. Dabbling in television, she featured in the popular British TV serial, The Jewel in the Crown (1984), as well as Indian serials such as Chand Sitare (1988), the very popular Shanno Ki Shaadi (2005), and Waqt Ki Raftaar (1999). She also made an animation film, Meri Pari in 1986.

In his biography, Dilip Kumar revealed that Kamini Kaushal was his first love but that she had rejected his proposal as she was already married to her sister's widower, and was caring for her sister's children.Kamini, with her trademark candidness, had explained, “We were both shattered. We were very happy with each other. We shared a great rapport. But what to do? That's life. I can't dump people and say 'Enough now, I'm going!' I had taken on the girls. I wouldn't be able to show my face to my sister. My husband, a fine human being, understood why it happened. Everyone falls in love.” 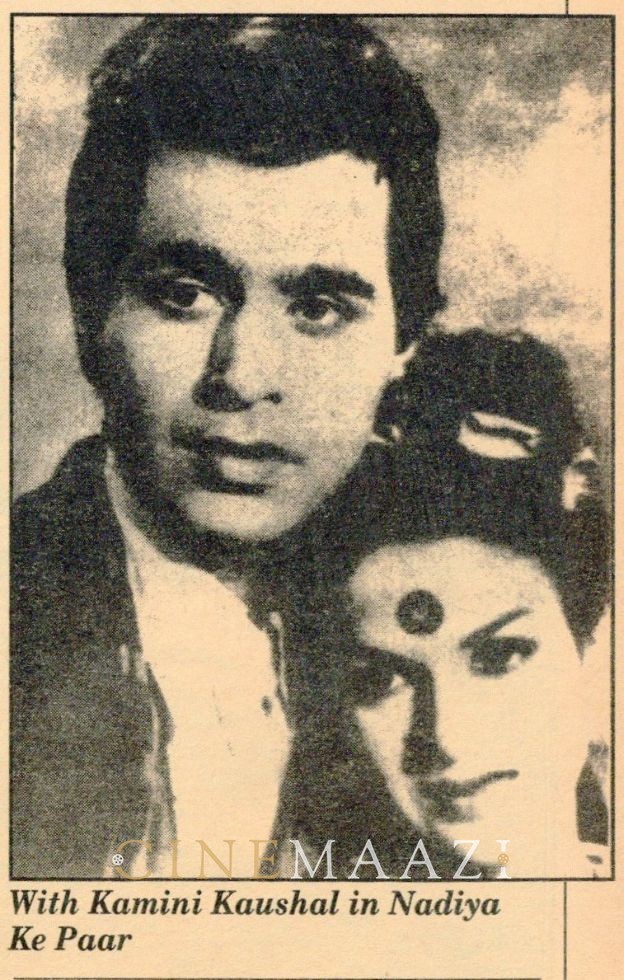